Masazo is an architect commissioned by Rohan Kishibe to evaluate the repair costs of his house but was also made an unwitting Stand user by Yoshihiro Kira. He acquires Cheap Trick but dies because of it.

Masazo Kinoto is a scrawny man, having an undercut with two wild locks of hair, and cauliflower ears. He is seen wearing casual business attire: a collared shirt, khaki pants, and a large trench coat.

Masazo is a quiet and timid architect, but a little greedy. His Stand, Cheap Trick, constantly keeps him paranoid, subliminally warning Masazo that he would die if anyone saw his back. Since obtaining the stand, Masazo is in constant danger of people seeing his back, causing him to behave erratically, and do bizarre acts to hide it, such as walking on the street with his back against somebody else's back, pushing himself against a wall to walk sideways, and even crawling up stairs upside down.

Masazo possesses the Stand Cheap Trick who attaches itself to its user's back and kills him when someone else sees the back. It then reattaches to whoever saw the user's back. While hanging on the back, Cheap Trick remains invisible to everyone, even other Stand users, and has the power to make itself heard and understood by any person or animal.

Masazo was too weak-willed to fully form his Stand and had no control over it, his power manifesting as an obsession over hiding his back. It was only when Rohan saw Masazo's back that Cheap Trick fully materialized.

Masazo is one of the people shot by Yoshihiro Kira to defend his son, Yoshikage Kira. Having lacked the power to control his stand properly, Masazo develops a phobia derived from its intimidating whispers. He's eventually called by Rohan to evaluate his burned house and had to turn his back against someone else's and walk backwards to reach the house.

Masazo is a first-class architect sent to evaluate the cost for repairing Rohan's burned home, planning to charge more than the necessary because Rohan was rich. Upon their meeting, Rohan immediately uses Heaven's Door to knock him out, suspecting a potential enemy Stand user. Much information about Masazo is harmless, with the exception of the strange man's abnormal fear of having his back seen. Growing curious about Masazo's attempts to hide his back, Rohan tricks Masazo into falling into a hole on the floor, exposing his back. This enables his parasitic Stand Cheap Trick to drain Masazo of his life and inhabit Rohan instead. 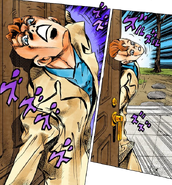 Kinoto sliding on Rohan's door to hide his back. 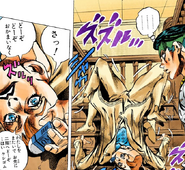 Grabbing the eraser Rohan dropped while telling Rohan to walk over him. 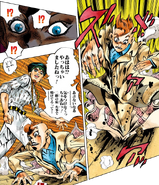 Tricked by Rohan and trapped. 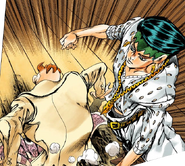 Rohan disappointed at his "ordinary" back. 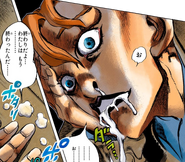 Kinoto after Rohan sees his back.

Kinoto's death due to Cheap Trick peeling off his back.

His corpse after having his life force absorbed by Cheap Trick.

Kinoto by a tree outside Rohan's home.

Kinoto sliding on Rohan's door to hide his back.

Kinoto inspects the damage done to the door.

Kinoto awkwardly grinning to show that everything is fine.

Hiding his back toward the staircase.

Rohan sees his back.

Kinoto after Rohan sees his back.

Kinoto's death due to Cheap Trick peeling off his back.

His corpse after having his life force absorbed by Cheap Trick. 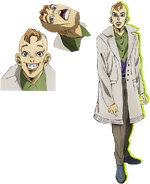 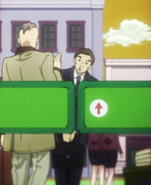 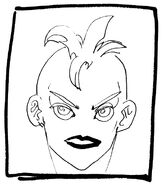