Melone is a member of La Squadra Esecuzioni. After Team Bucciarati is forced to take the road, he attempts to kidnap Trish Una and uses his remote Stand, Baby Face, to battle Giorno Giovanna.

Melone is a young man of athletic build and average height. He keeps long straight hair descending down to his shoulder.

Inspired by VenetianW design,[3] Melone's most distinctive feature is his clothes. He wears a dark suit with a concentric circle motif, lacking the right sleeve and a large part of the right side. Melone also wears matching gloves and shoes, as well as a transparent mask covering his right eye. Over his trousers, Melone sports two decorative chains at the shins' level in each leg.

Melone shows himself to be a polite man in most circumstances. Approaching every activity with cold professionalism, he physically and mentally inspects his future victims, looking them more like tools to create his Stand than fellow human beings. The TV anime portrays a rather lecherous nature, showing him openly licking his lips in delight as he observes a beautiful woman's legs and feet; something his teammates are humorously disturbed by, as well as looking at a woman's legs in the train station near the end of the Baby Face arc. Both of these scenes are absent in the manga, and only present in the TV anime.

Melone always reacts jovially when circumstances match or exceed his expectations, exclaiming "Di Molto!" (literally "By a lot!" in Italian). On the other side, when things do not go his way, he becomes nervous yet remains cool-headed enough to issue tactical instructions, likely due to the fact that he is not the one facing immediate danger.

Melone is one of the least confrontational enemy Stand Users in the series, favoring hit-and-run tactics or laying traps, never reacting with violence to any setback, and even advising his Stand to flee instead of continuing to fight.

Melone wields the Stand Baby Face, which is a computer-like humanoid Stand he uses to create autonomous long-range Stands also named Baby Face he can direct to kill his targets. He needs to find a blood sample of his target and a woman to host said Stand before he can act.

Pseudoscience knowledge: Melone is well-versed in pseudosciences used to divine things such as character compatibility or a future child's characteristics. This serves him to determine the quality of the Stand he will create in function to his target.

Melone is first shown collecting a blood sample left from Bruno Bucciarati's battle with Prosciutto and Pesci for the Homonculus Materialization of his Stand, Baby Face. He later finds a woman while on a train, whose hot temper encouraged Melone to use her to materialize Baby Face. Once the Stand was born, he then educates it to kill off Bucciarati's group and capture Trish Una.

When Baby Face locates Team Bucciarati and launches its attack within Coco Jumbo, Melone is seen giving it orders from his computer. However, Melone's plan inadvertently causes Giorno Giovanna to not only deal damage to Baby Face, but its ability allowed him to discover Gold Experience's indispensable ability to repair injuries through its basic life-giving power. Melone eventually loses control of Baby Face, who proceeds to act independently and ends up nearly burning to death.

After the defeat of his Stand, he's called by Ghiaccio about the wreckage. Ironically, before he could generate another homunculus incidence of Baby Face, a cube portion of his burning Stand finds its way back to him as a venomous snake animated by Giorno and bites his tongue, killing him off-panel.

Melone does not appear as an enemy character that can be faced, however, Baby Face's battle against Giorno appears as one of the Story Drama that can be seen in the Gallery Mode.

Melone appears in the PS3 title as an explanatory character in one of the game menus, being the player's eager guide within the Option Mode.

Although Melone makes no direct appearance, several of his quotes are featured. For example when the player has defeated all enemies, there is a chance that his signature catchphrase "DI MOLTO" will be played. 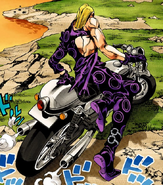 Melone entering a woman's personal room on a train 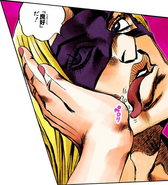 Melone tasting a woman's skin to figure out her blood type. 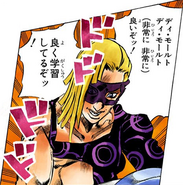 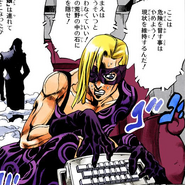 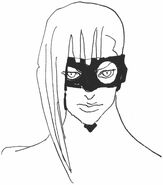 Melone licks his lips while watching a woman

Melone tells Ghiaccio about the pay for the last assassination, angering him

Melone and Baby Face fighting Giorno in Uragirimono no Requiem 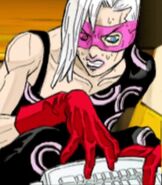 Melone as he appears in GioGio's Bizarre Adventure's Story Drama