Metallica (メタリカ, Metarika) is the Stand of Risotto Nero, featured in Vento Aureo.

Metallica manifests itself inside Risotto's body as a swarm of small metallic beings with stitches across their individual bodies. Their mouths are shaped as though they are moaning or screaming.

Its design is based on human cells, red blood cells and the hattifattenersW of the MoominsW.[1]

Metallica is presented with a silvery color in the colored manga.

Metallica's sessile nature prevents it from attacking on its own, however the magnetic power it produces is highly lethal. Risotto is capable of using this ability to its fullest, particularly to stealthily assassinate targets.

Metallica has the ability to freely manipulate iron in the air and ground using magnetism.[2] The Stand is active within a 5 to 10 meter radius around Risotto,[3] and has enough precision to form objects by gathering the iron inside another person's body. By default, he naturally attracts iron.[3]

Iron is one of the most common elements on earth, found in sand, mineral water, and plants; great quantities of it can be found in plants like spinach, meaning Risotto has access to a near infinite number of weapons no matter where in the world he goes.

Risotto Nero prominently uses this ability to turn the iron inside a targets blood into sharp objects such as razor blades,[4] needles[5] or scissors[2] in order to internally damage them. This is shown when Doppio tried to rush Risotto, only to get a face full of needles created from the iron within his blood. Metallica can also use the iron inside its user to manipulate his severed body parts and create staples to reattach them.[6]

Furthermore, the use of iron from a target's body dramatically diminishes the quantity of hemoglobin inside them, reducing the blood's ability to carry oxygen throughout the body, with the blood of the target steadily changing color from red to yellow as more hemoglobin is removed.[6] Unable to function, the suffocating body will eventually die if the victim doesn't replenish their iron in time,[7] enabling Risotto to simply wait out his opponent's death.[3]

With its ability, Metallica can stick fine particles of iron onto Risotto's body,[6] causing him to reflect light and blend into the background.[5]

This ability also carries on to Risotto's blood, as shown when Risotto was shot by Aerosmith, causing his blood to splatter onto Doppio's head and automatically camouflage it with the background, resulting in the image that Doppio saw previously that made him believe that Risotto would blow a hole through his head.[3]

If Metallica makes direct contact with another iron based stand, such as Aerosmith, Risotto gains free control over it. 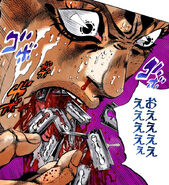 Metallica replacing the iron in Doppio's blood with metal pins 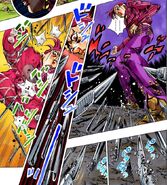 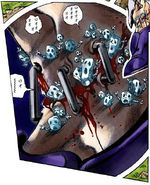 Using his Stand to reattach his severed foot

Sticking to the side of Aerosmith, temporarily controling it

Fading away as their master dies 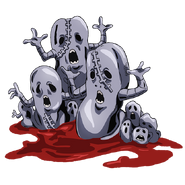