Ensure the safety of the President and First Lady

He is President Funny Valentine's personal bodyguard. When Lucy Steel and Hot Pants infiltrate the President's residence in Chicago, he ends up battling the pair in order to protect his employer.

Mike O. is a dark-skinned man of average to above-average height and medium build. His head is shaved save for a dark, curly patch on his crown; and centered on the edges of both eyes, extending to mid-forehead and covering his cheekbones, he has painted or tattooed a light, swerving design tapering at both ends into a spiral.

He wears a heavy overcoat of a thick collar and a sort of thick braid lining the length of his torso; a neatly folded scarf, and pants covered regularly by short spikes.

Mike O. is a fairly serious henchman to Funny Valentine.

As a security officer, Mike O is highly dedicated to his job. When someone infiltrated a presidential building to intercept a message from Ringo Roadagain, Mike O. has led an exhaustive investigation on the staff and their relatives, making over 1000 detailed files. He takes his duty as a symbol of honor and has commented that finding Hot Pants in the presidential building was a breach that stained this honor[3]. Mike O. was also very distressed when he discovered that the First Lady Scarlet Valentine had died under his watch. On the other hand, Mike O is extremely ruthless toward those that threaten the President. Wrathful about Scarlet Valentine's death, he then decided to kill both Hot Pants and Lucy Steel on the spot as an execution.[4] Likewise, Mike O. requested that he could execute whoever stole Ringo's message.[5]

From the way he conducts his investigation and his attitude during his fight with Hot Pants, he seems to be very intelligent, capable of combining his Stand and surrounding objects to create deadly weapons and strategies.

Mike O. has a small quirk of character in which he repeatedly uses the word 世界 (Sekai) in all its meanings. He complains by stating his body "is freezing up in this world", asks Diego Brando "how it goes in the world of racing" or theorizes that the person who infiltrates Valentine's government could "be involved in the world of Stand Users".[6]

Mike O.'s Stand is Tubular Bells, with which he blows balloon animals out of metal (often long, iron nails), gaining a life to track and/or invade the body of a target; exploding and reverting suddenly to their metallic form.

Mike O. makes his first appearance when his principles decide it is time for Diego Brando to reveal the traitor's identity. The president gives him the task to track down and kill the intruder who was helped by Mountain Tim, and Mike proceeds by using his Stand powers to create a little group of balloon-dogs. These dogs memorize the intruder's scent and hide in the President's bedroom to protect him.

After a confrontation with Scarlet Valentine and the insidious balloon-dogs, Lucy barely manages to steal the President's corpse parts and survive. Mike, who perceived the explosion of his dogs, tries to figure out what happened when Hot Pants appears to save Lucy. Once attacked, he uses his Stand to turn the tin shutters into flying explosive swans and the shutter themselves into flying deadly guillotines. By using this trick, he manages to amputate Hot Pants arm before her Cream Starter could reach him.

Attempting a final blow, Mike misses his target, revealing the presence of Lucy and (to his shock) the dead body of Scarlet Valentine. Furious because he couldn't manage to protect the first lady, he loses his mind and blows into his needles to prepare his last attack. It is now that Hot Pants reveals to have used her flesh spray to throw tiny meat particles and put them into Mike's lungs. He ends up accidentally killing himself when his lungs are filled with too much air and explode. 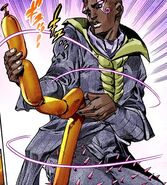