With Stand-like powers (Mikitaka cannot see other stands even if he acquired one himself), Mikitaka professes to be of extraterrestrial origin; a claim of which the validity is never fully examined. His shapeshifting ability is named Earth Wind and Fire.

Mikitaka appears as a teenage boy of average to above-average height and slim to average build. He has pointed ears and long, straight light hair flowing back over his head. He is introduced wearing a nose chain, which is missing in later chapters. His appearance may be inspired byLegolas from The Lord of the Rings.

He decorates a dark, modified school uniform with various astronomical and alien-themed symbols, including ringed planets either side of his collar, and in a column on his torso two flying saucers, two stars, and an infinity symbol (∞) with a crescent moon and sun in either loop.

In either an elaborate prolonged charade, a stark extended close encounter, or a truthful if fantastical account, Mikitaka claims to be a 216-year-old extraterrestrial. He exhibits great curiosity in human culture, though does not seem to understand it. Unafraid when offered a handkerchief, he eats it. As a result, he also can't understand sarcasm or read certain situations. He proclaims himself a peaceful individual, claiming to have left his weapons in his space shuttle as he did not come to fight and is stated to be a self-proclaimed animal lover, even owning a pet mouse.

Mikitaka is otherwise a calm and pleasant person, not hesitating to risk his life to save his friends and more than willing to return favors. His kindness is seen first when he thanks Okuyasu and Josuke for their handkerchiefs by giving them two ice-creams (fabricated with the flesh of his own hands).

Mikitaka has an odd quirk where he detests the sound of sirens. Hearing just one causes him to writhe in agony and his skin to turn red, while desperately trying to find some way to escape it, claiming that such sounds are harmful to his species.

Designated as the effect of a Stand-like power named Earth Wind and Fire; Mikitaka may transform any part of or his entire body into almost any object, as long as the object isn't too complex, creates more power than Mikitaka could, or involves a human face because Mikitaka cannot fake a face, finding humans too similar between themselves to care.

While looking for more people to transform into Stand users in order to protect his son, Yoshihiro Kira was guided by the Arrow into piercing its seventh target, Mikitaka. However, the Arrow didn't pierce him perfectly, bouncing off of his neck instead and leaving the boy with just a scratch.

I Am an Alien

The following morning, Josuke Higashikata and Okuyasu Nijimura discover a series of mystery circles in the middle of a crop field: half-buried in the crop of the larger central circle lies Mikitaka. He is awakened by Josuke and Okuyasu's arrival and his strange personality is immediately revealed: instead of introducing himself, he asks if he is currently on planet Earth and claims to be an alien. The protagonists think he's just kidding, but when he eats Josuke's handkerchiefs and pulls two frozen ice-creams out of his bag, they realize there's something strange about him.

He finally reveals his name to be Nu Mikitakazo Nshi (ヌ・ミキタカゾ・ンシ), a 216-year-old space pilot. He says his planet lies within the Magellanic clouds and is slowly dying, and that he came to Earth to see if it was a nice planet and if its inhabitants were friendly. As a fire truck passes by, its noise causes Mikitaka to experience a violent skin reaction. He begs Josuke to take him away, revealing his transformation power for the first time.

Josuke, now believing Mikitaka to be an alien, asks him to return the favor, by exploiting the alien's ability and making him assume the shape of three dice. The two new friends then play dice with Rohan Kishibe in order to cheat some free cash out of him. Despite the mangaka's suspicions (even hiring Tamami Kobayashi to figure out if Josuke's lying) and Mikitaka's discomfort, Rohan remains unable to figure out Josuke's trickery as the game is slowly ending. Only then sirens start ringing nearby, which immediately sends both Josuke and Mikitaka into a panic as the latter begins to disorientate due to his circumstance. It was found out that the sirens are in fact triggered by the fire at Rohan's house, as it is started by the magnifying glass he had carelessly tossed away earlier after examining the dice. This creates a distraction which Josuke uses to withdraw from the match and run away, bringing Mikitaka along with him, thus leaving the game unfinished.

Later on when they are running (away from Rohan), Mikitaka asks Josuke about whether or not he was able to be help of him during the game, to which Josuke, out of frustration, responds by telling him to shut up.

The following day, Josuke meets Mikitaka's supposed mother, who reveals that they had to move from Tokyo because of her son's obsession with aliens. Mikitaka, on the other hand, explains to Josuke that his "mother" is just a human woman he hypnotized to make her believe he is her son. He then departs with his mother to do the paperwork for his school transfer, leaving Josuke and Yoshihiro Kira, who is observing nearby, extremely confused about Mikitaka's real identity.

Let's Live on a Transmission Tower

Later in the story, Josuke and Okuyasu meet Mikitaka again, staring at an abandoned telephone tower while assuming the form of a pair of binoculars. After a short exchange of words, Mikitaka expresses that he found the tower unnatural and was waiting there in order to show them, which upon closer inspection it turns out to be true as there is smoke coming out from it. Mikitaka then returns into this binoculars form to help Josuke and Okuyasu investigate the tower, only to find out there is actually a person living up there in a seemingly self-sustainable fashion complete with various furniture, a set of essential installments and a farm field for herbs and vegetables.

The mysterious person notices the three and introduces himself as the tower's legal owner, stating that he has been living on it the past 3 years as his home. Although initially approaching the tower with suspicion, Josuke drops his guard down upon seeing Yoshihiro Kira there and recklessly enters the tower despite Okuyasu and even the tower's owner, Toyohiro Kanedaichi's warning. It is then quickly revealed that Toyohiro and Yoshihiro are in fact, allied in a scheme of bringing Josuke into Super Fly's prison and Toyohiro's previous attitude was all an act. The tower's owner immediately makes his escape through climbing the unused electrical cable, but thanks to Mikitaka, who transformed into the cable, secretly replaces the one which Toyohiro is climbing and thus, he is able to stop the tower owner's "Old Maid" plan and bring him back into the tower, freeing Josuke.

However, Toyohiro exploits his Stand's property of force reflection to trap and pinning Mikitaka onto the tower, thus resuming his escape. Josuke attempts to help but is stopped by Mikitaka, saying that he is fine with being left there as he wishes to repay for accidentally dragging the duo with him into this situation by asking them to investigate the tower in the first place. Nevertheless, Josuke enters and challenges Toyohiro in a duel.

After a fierce battle, Toyohiro is defeated. He confesses that he really meant no ill will as he really just desires to get out of the prison his own Stand locks him into, which leads him to be easily manipulated into cooperation by Yoshihiro Kira. Toyohiro has since then changed his mind and decided to not leave the tower ever again, releasing the three as well as offers them wound treatment and food.

After Toyohiro's defeat, Mikitaka only reappears at the end of Part 4 with the other protagonists to say goodbye to Reimi.

(The information below derives from the TV Anime. As such, it may or may not be considered ​canonW​.)

After the final battle with Yoshikage Kira, he is seen talking to Toyohiro on the tower and keeping him company, adoring the town of Morioh in the distance.

Mikitaka's powers seem more likely to be the result of a Stand ability bound to his body (like Yellow Temperance or Khnum) than that of an alien nature, but behaving as if he has always possessed them, doubt is cast on the otherwise reliable touch of the Arrow, further supported by the fact that he appeared incapable of seeing Crazy Diamond, not reacting even while it threw a punch at his face. An enigmatic character, Mikitaka's true nature is never revealed by Araki, and evidence exists for both an alien and human nature. 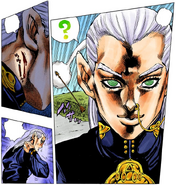 Two cold ice-creams in the bag 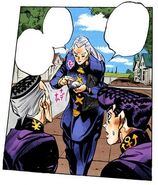 Mikitaka and his pet mouse

Mikitaka's reaction to the siren 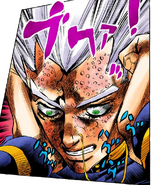 Mikitaka develops a rash upon hearing the siren 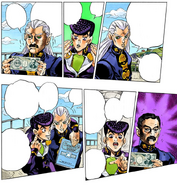 Mikitaka tricks Toyohiro by transforming into a cable.

Mikitaka's initial appearance, after being shot by the arrow.

Revealing that he's an alien.

Mikitaka pulls two cold ice-creams out of his bag.

Giving Josuke and Okuyasu the ice-creams.

Mikitaka tells them to keep his spaceship a secret.

Mikitaka reacts to the loud noise.

Mikitaka's allergic reaction to the siren.

Mikitaka transforms in front of Josuke.

Josuke tells Mikitaka of his plan to cheat Rohan Kishibe.

Mikitaka throws up in his dice form after being thrown around too much.

Mikitaka notices his "mother" on the street.

Mikitaka informs Josuke that his mother is just a brainwashed woman.

Bidding Josuke farewell for the time-being.

Mikitaka tricks Toyohiro by transforming into a cable.

Worried about Josuke falling from the pylon.

Mikitaka fondly looking out over Morioh.

Mikitaka hidden in the background in the third opening, Great Days. 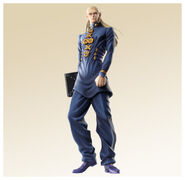 Mikitaka as a Statue Legend figurine