Miss Cherry (in her school days)

Mitsuba Higashikata (東方 密葉, Higashikata Mitsuba) is a minor character featured in JoJolion. She is the wife of Jobin Higashikata and the mother of Tsurugi Higashikata. Mitsuba is a Stand User, and possesses the Stand Awaking III Leaves.

Mitsuba is a woman of average to slim build. She has short, medium-colored hair with sideswept bangs curled upward. Her outfit consists of a shirt with two cutouts on her upper chest and a checkered skirt. She also wears a pair of heels.

In her later appearance, her bangs are no longer curled upward and her hair is longer on the sides, now covering her ears to hide her skin hardening to stone. She wears a short sleeve top with knots on the shoulders, shorts, wristbands, a long transparent dress, and a pair of high heels. Her shirt is adorned with a downward arrow symbol, whereas her wristbands have symbols with arrows pointing both upward and downward.

It is revealed that Mitsuba has had different parts of her body successively turning into stone due to her treatment at the University Hospital. Starting with her teeth, her scalp above the right ear was then affected, and finally both of her legs were crumbling to the bones for a short period of time. Having an additional Locacaca treatment that cost her the arms of the fetus inside of her, she nonetheless ate another Locacaca to save her child, leaving her with no nose.

Mitsuba is a vain woman, caring a lot about her appearance and wanting to look perfect. She also demonstrates some petty selfishness, as she closes the door of an elevator before an old woman with crutches can enter just so she can have it to herself.[3]

However, it is also shown that she cares deeply for her children, willingly eating a Locacaca to save her unborn child even if there is a risk of her dying. For the sake of her child, she also proves herself to be a fierce and resourceful fighter, brutally stomping Wu Tomoki when he gets in her way.

Mitsuba's Stand, Awaking III Leaves, takes the appearance of a cloaked humanoid adorned with a multitude of arrow-shaped designs. Using her stand, she can manifest small hand-sized arrows that redirect energy and objects outwards towards their tips.[4]

Mitsuba is introduced as Jobin's wife by Norisuke Higashikata IV during Josuke's arrival at the Higashikata Household.[1] She is seen carrying around her child, Tsurugi, and was present during the family photo.[5]

In her school days, Mitsuba was known as "Miss Cherry". She won a contest and got to travel to China and Europe for the fruit of Japan. She ended up meeting Jobin, and married into the Higashikata family. She then became a model for the Higashikata Fruit Company's ads. She had support from the whole family and her modeling helped with sales as well.[6]

Equivalent Exchange and the University Hospital

Shortly after a fire has ravaged the Higashikata family's orchard, Mitsuba arrives at T.G. University Hospital to see her physician Dr. Wu Tomoki about her sudden loss of balance and hearing that morning, as she feels something wrong with her right ear. Dr. Wu examines the ear and hides from her the fact that it has turned to stone, and says it is simply a dry scalp due to allergies and it is nothing to worry about. Mitsuba demands that he treat her, as she has felt the skin and it feels like stone. She then mentions the pattern she has noticed since she came to him for a breast augmentation earlier, after which her teeth felt as if they turned into stone, making her drool uncontrollably and lose her sense of taste, forcing her to cover her mouth to avoid talking to people. After she came back to him to treat this malady, her hearing loss began soon after. She demands treatment, as she knows her young son will say something if he feels the skin is wrong. Dr. Wu makes a phone call, and then offers her one more treatment for 200 million yen. Unbeknownst to both of them, Yasuho Hirose has come to the hospital to treat her menstrual pain, and she spots Mitsuba being wheeled away in a wheelchair while her ankles have crumbled away down to the bone.[3]

Suspicious, Yasuho calls Josuke, who is already on the way to the hospital with Rai Mamezuku to investigate a possible Rock Human there, and he warns her to stay put. However, she tries to follow Mitsuba, only to find her completely healthy and no longer in the wheelchair. After telling Yasuho about her breast augmentation, and saying she originally met Jobin after she won a modelling contest for Morioh's Miss Cherry competition and becoming a model for the Higashikata Fruit Company, Yasuho asks what happened to the wheelchair she was in, but Mitsuba cannot remember one. Yasuho soon discovers the chair disassembled and stuffed in the office's desk drawer, while Mitsuba is overcome with a desire to drink Dr. Wu's silicon-infused water and nori. Yasuho tries to call Josuke to warn him of what she has found when she is attacked and knocked out by a stone fragment entering her ear. Mitsuba, not in control of her own body, drags Yasuho's body into the office and closes the door.[6]

Yasuho awakes and finds Mitsuba pinning her down, her body unusually heavy and covered in weird blisters, until Yasuho yells at her, which brings Mitsuba back to her senses. Yasuho asks Mitsuba if she has taken the Locacaca, knowing it has been causing a series of equivalent exchanges in her, but Mitsuba cannot remember what has happened, as there is nothing physically wrong with her. Yasuho tries to find a way out, but after discovering her cellphone has been destroyed in the previous attack, finds herself attacked once more by stone fragments leaving Mitsuba's hands. Once Yasuho frees herself, she warns Mitsuba that they are under attack by a Rock Human who is only after the secrets of the Locacaca, when Dr. Wu reconstitutes himself from the stone fragments and says he is in the organization for more than that, and asks that Mitsuba stay behind so he may continue his examination. Yasuho drags Mitsuba out of the office, who then asks what else could have caused the equivalent exchange, when she confides in Yasuho that she has been hiding a new pregnancy from her husband and son. As Yasuho realizes the horror of the situation, Mitsuba calls forth her Stand Awaking III Leaves and resolves to get to the bottom of what Dr. Wu has done to her.[7]

Mitsuba uses her power to redirect things through summoned arrows to create a safe zone and then propels herself to kick Wu into a wall then stick him to it. Going up to the gynecology department, Mitsuba and Yasuho expel the remainder of Wu's fragments but Mitsuba sees with horror that the child inside of her has been partially turned into stone. Wu reappears in the elevator, but using her Awaking III Leaves, she triples the acceleration of the elevator to send Wu on the ground, uses tape to stick his fragments and tosses them out of the hospital. Putting the foetus' fragments back inside her, she resolves to save it. Finally Mitsuba reaches the examination room and discovers with Yasuho a secret laboraty doubling as a garden for Locacaca trees.

Mitsuba eats one of them to save her child, but she doesn't realize that Wu has come back and hidden inside the fruits, infiltrating and controlling her body again. However, Yasuho manages to fight him back and Josuke arrives to finish Dr. Wu off. The Locacaca she just ate has taken effect and she loses her nose.

6 days before the Harvest, Mitsuba goes to take Tsurugi from school. But then one of Tsurugi's comrade, who had teased him about Kaato being a child murderer, is crushed between iron gates. Tsurugi is the prime suspect, and though Mitsuba vehemently defends him, she has her doubts. Moreover, she notices on a video recording that the head doctor of TG University Hospital, Dr. Satoru Akefu, is standing near the gates.

Later, she meets Jobin at her house, and her situation becomes more complex as she not only see Akefu again near the estate, but also catches a glimpse of the Locacaca hidden behind cacti in Jobin's possession, causing him to suspect her.

Mitsuba and her doctor, Wu Tomoki 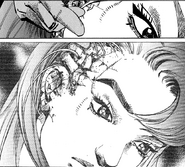 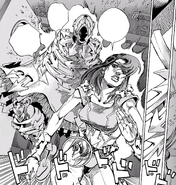 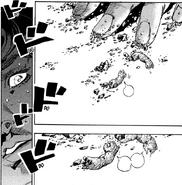 Mitsuba loses her nose in an equivalent exchange

Mitsuba after losing her nose

Mitsuba being carried by Jobin

Jobin and Mitsuba on the bed 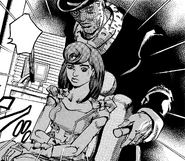 A photograph of Mitsuba in a wheelchair, pushed by Satoru 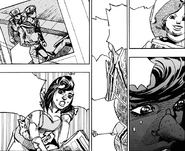 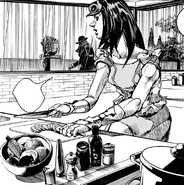 Mitsuba's knife is "knocked" into her hand by Satoru's ability, cutting deep into two of her fingers 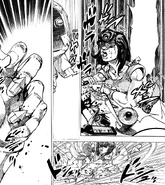 Mitsuba uses Awaking III Leaves to close her wounds, knocking over a bottle of cooking oil in the process

Mitsuba realizes that her pot is overflowing

The pot explodes due to Satoru's ability, sending scalding water towards Mitsuba's face

Mitsuba is told by Tsurugi to not worry, as "the Higashikata family always wins" 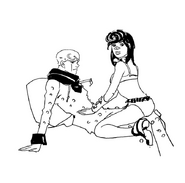