Miu Miu is the corrections captain of Green Dolphin Street Prison and she clashes with Jolyne Cujoh and Emporio Alniño when she comes to stop Jolyne from breaking out of prison. She is a Stand User and uses Jail House Lock to manipulate the memories of her enemies.

Miu Miu is described by Gwess as giving off an aura from having come from an upper-class socialite family. She has long, ratty blonde hair that's styled in several long tendrils with her eyebrows styled into circles. She wears heavy amounts of makeup and as a prisoner, she is dressed in a large sweater with pom-poms that resemble eyeballs. Miu Miu also wears stockings that have holes in them and a skirt with various words written across it, such as "Delicious" on the rear.

Jail House Lock is a humanoid Stand capable of making one or several people able to only memorize three new pieces of information at once, the oldest memory being replaced by the newest memory.

Introduced in a way that she appears to be an inmate, Miu Miu is actually the head guard in charge of the visiting room and front gate areas of the Green Dolphin Street Prison sent out to make sure Jolyne Cujoh does not meddle with Enrico Pucci's affairs anymore.

Her Stand causes trouble not only for Jolyne, but also for Emporio Alniño, who attempts to contact Jolyne about her true identity as the head guard and is shocked by an outlet several times due to his forgetfulness induced by her Stand's effect.

When Jolyne finally remembers to find Emporio, she manages to make Miu Miu out to be her enemy. Unfortunately, Miu Miu sends the guards after her, taking care to send them in squads of more than three to make it more difficult for them to counter her attacks. Right as she is about to get the upper-hand, however, Jolyne defeats her with a series of punches, uses her as a hostage and as a means for them to escape the prison, and escapes with Emporio and Ermes Costello.

Miu Miu as the head of security 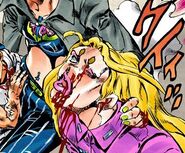 SO Chapter 97 Cover A

SO Chapter 97 Cover B

SO Chapter 101 Magazine Cover A