Moody Blues is a humanoid Stand of a height and build similar to Abbacchio's. It is clothed from its head to its knees in a semitransparent piece of medium shade, open between the base of its neck and its crotch (revealing a light surface), and which forms a tent between its head and its shoulders.

It has a depressed, digital timer on its forehead; while its eyes resemble the speakers of a cassette player; repeated on the sides of its shoulders, the back of its hands and on its knees.

Most media featuring Moody Blue feature it being white and purple.

In the anime, Moody Blues has a constant VHS static-like effect present over its body while active, with said effect becoming more pronounced when it uses its ability. Furthermore, when activated and when using its abilities it emits sounds akin to both a landline telephone's dial-up tone and hang-up click, as well as the fast-forward and reverse winding of a VHS tape.

Although physically mediocre in direct combat, Moody Blues' esoteric power makes it useful for a number of outside tasks.

Moody Blues' primary ability is retrocognition; in particular the ability to reenact or to "replay" past events with utmost precision, allowing Abbacchio to freely investigate events.[2] Moody Blues' can transform into a lookalike of any person of Abbacchio's choosing and then reenact that person's past actions and speech. Moody Blues has a digital timer on its forehead which indicates the point in time it is reenacting.[2]

Moody Blues can recreate events as far back as years (possibly decades) into the past; however, the farther away the event is in the past, the more time Moody Blues must spend immobile to reach it. Thus, it had to remain defenseless for possibly 8 to 10 minutes because Abbachio investigated Diavolo's past meeting with Donatella Una on the beaches of Sardinia 15 years ago.[3]

Every event happening to a particular location or person will be exactly recreated by Moody Blues, even if it shouldn't happen; for instance, Moody Blues reenacting Narancia past will produce music because Narancia listened to some.[2] However, there are limits to what Moody Blues can replay, for instance, Clash's teleportation through water is impossible to reenact.[4]

Abbacchio doesn’t need to know the identity of the person he wants Moody Blues to replay, the ability works just as well with just the time period and location. This was seen when Moody Blues replayed a message to Team Bucciarati from Pericolo despite Abbacchio having no knowledge of Pericolo being the one Moody Blues would imitate when asked to replay the message. Again, when Abbacchio used Moody Blues to discover Diavalo's identity, despite never having seen his face before.

The "replay" can be controlled as if it was a video, thus Abbacchio can accelerate its speed to skip past uninteresting events, or pause it, allowing people to examine or interact with the paused event if need be.[2][5]

The replay can be used for more than just investigating; Moody Blues can imitate the form of an individual for a limited time; at one point enabling Abbachio to pilot a plane from copying the previous motions of the pilot recorded by Moody Blues.[6] The imitation effect of its ability can also be used to disguise Moody Blues, shown when it changed into Abbacchio in order to fool Illuso's Man in the Mirror into dragging it instead of Abbacchio himself into its mirror world.[7]

The major drawback of this ability is that Moody Blues cannot attack while it is "rebroadcasting", and thus it becomes vulnerable.[5] However, once it is finished, it can attack once again.

Moody Blues behind its user, Abbacchio 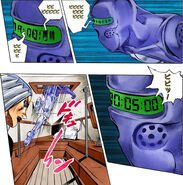 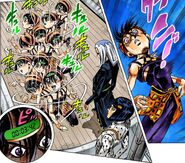 Moody Blues searching for the enemy in darkness

The Stand disguised as Abbacchio himself ambushing Man in the Mirror

Through the Stand, Abbacchio understands the truth behind Illuso's ability 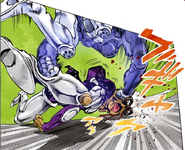 Punching Man in the Mirror 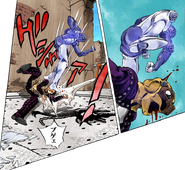 Step on Man in the Mirror 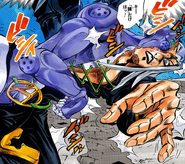 Half of its body being trapping in the Mirror World

Severs its user's own hand to get Mr.President's key away from Illuso 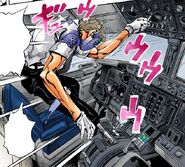 Turning into a pilot to fly to Sardinia

Moody Blues & Abbacchio in the 1st ending credits for Part 5 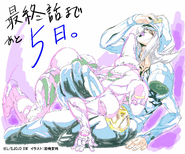 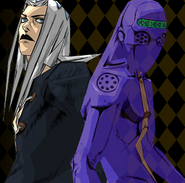 Moody Blues and Abbacchio as menu appearance, All Star Battle 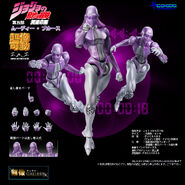