Morioh (杜王町, Moriō-chō) is a fictional town located within Japan's S City, M (Momoji) Prefecture;[1] and the setting of the majority of JoJolion.

The town was founded by Date Masamune. The coastline is saturated with condos, touring guides and vacation homes. Tourism is the town's main source of income; but, recently, there has been an unprecedented boom in the microchip manufacturing industry.

On March 11, 2011, before the events of the story, a great earthquake and tsunami (in reference to the Tohoku earthquake) struck the town, inflicting remarkable damage. In response to the approaching tsunami, the coastline sections were abandoned as sacrifices to protect the remainder of the city and its occupants. Restoration of the damaged areas is still underway, leaving many homeless and suffering.

Countless people were killed or are missing. With a significant amount of residential and industrial buildings damaged, refugees and the unemployed make up many of the survivors. The aftermath of the earthquake remains of primary concern in Morioh. The night after the event, the town became isolated by strange protuberances known as the Wall Eyes.[1]

According to the Geospatial Information Authority of Japan's official map, Central Morioh extends three kilometers inland from the coast and is located on a pleateu fifteen meters above sea level. Because of its placement so close to the sea, the coastline sections were abandoned in order to protect the remainder of the city and its occupants. After the quakes, several Wall Eyes litter the area between the coastline and the mainland.[1] 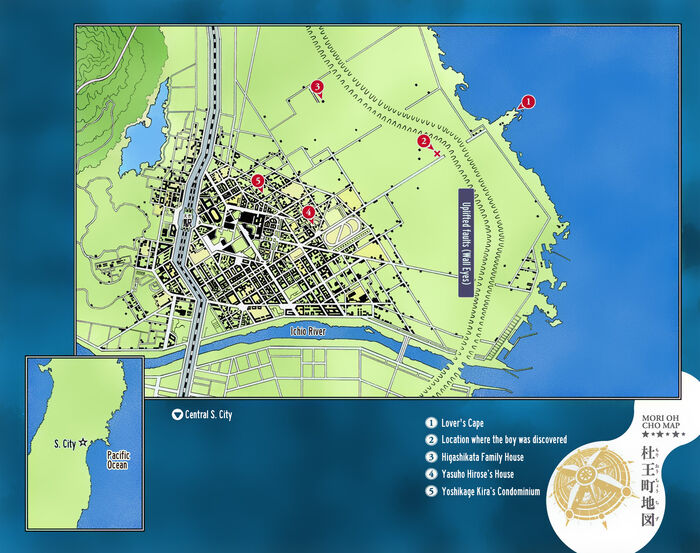