Ghost Rider in the Sky

Fatal gunshot wound to the head

Mountain Tim (マウンテン・ティム, Maunten Timu) is a side character and ally featured in Steel Ball Run.

Working as a cowboy and bounty hunter, Mountain Tim is announced as a leading competitor in the Steel Ball Run. During the first stages of the race, Tim becomes one of Johnny and Gyro's allies. He also is a Stand User and shifts through his lasso thanks to Oh! Lonesome Me.

Mountain Tim is a man of average to above-average height and average build. Handsome and light-haired, he later acquires a scar crossing his face.

He wears a stereotypical range of cowboy attire; his hat has a zebra print, while the clothing on his upper torso, his belt gun holster, and his scarf have a leopard print. He wears a sheriff's badge in the shape of a five-pointed star on his left side.

Mountain Tim is introduced as a benevolent bounty hunter who is well acquainted with the law and is stated to have made many friends[4]. Although he participates in the Steel Ball Run, Tim quickly abandons his goal to give chase to a participant assassinating the competition. It seems his benevolence is such that horses intuit a sense of great respect for him, bowing their heads when he approaches[5]. At the moment of his death, Mountain Tim confesses that he never expected to die a peaceful death but longed for at least a place to return after his journey[6].

Mountain Tim usually maintains as cool-headed demeanor. Although he makes the occasional disinterested quip, Tim is serious most of the time.

Tim becomes attracted to Lucy Steel upon their first meeting, notably suavely picking and offering her flowers and sighing that she's a married woman[7]. During their second meeting, he actually confesses his love and ultimately respects Lucy's loyalty to her husband.[8] Tim goes to great lengths to protect Lucy, immediately coming to her aid when she calls for help despite breaking into the President's office and keeps silent when Blackmore interrogates him[6].

Mountain Tim's Stand, Oh! Lonesome Me, permits him to spread his entire body along a rope of his equipment.

Possessing a mysterious mastery of equestrianism, horses tend to bow their heads in his presence. Tim's horse is Ghost Rider in the Sky.

In 1875 when Mountain Tim was 16, the young man was already part of the army. Tim's unit was assigned to venture out into the uncharted areas of the Arizona desert. The area turned out to be a Devil's Palm, and his unit became lost while wandering through it. Unable to find water, the horses died, with the soldiers dying soon after. Tim was also nearly fried to death - but woke suddenly in the middle of the night to discover that a tiny bit of dew had collected on his rope and his body, having merged with the rope, was absorbing the water on its own. He was the only survivor.

In the following years, Tim began working as a cowboy and bounty hunter. His skill and sense of justice made him actually famous in the country.

After ranking 4th in the first stage of the race, he is called in to help with the investigation of a gruesome murder which took place along the race's course. The sheriff deputizes him, requesting that he pursue all potential suspects and believing that Tim himself will be targeted by the culprit as one of the race forerunners. Once the second stage starts, Tim is able to match the horseshoe prints found at the murder to those of the Boom Boom Family and trails them. At night, he finds a horse and the man he believes to be the culprit (but who is actually Benjamin Boom Boom disguised as Johnny). "Johnny" throws a horseshoe at Tim and takes refuge in a massive brier patch, but Tim easily lassos him around the neck - making use of Oh! Lonesome Me to prevent "Johnny" from cutting the rope. "Johnny" still manages to do so, however, and flees on his horse while reverting his face to normal. Tim, now believing Johnny to be the killer, begins his hunt for the real Johnny - not aware that now he, Johnny and Gyro have all been affected by the Boom Booms' ability and will explode upon getting too close to each other, due to the magnetic pull.

As Tim gets closer, Johnny and Gyro realize that he must have been affected by the Boom Booms' ability as well. Gyro ends up using a steel ball to force Tim off his horse, but unfortunately, the trio were already too close and Tim goes flying toward Gyro and Johnny. However, he manages to stop the potential impact by utilizing his Stand ability and pulling himself onto a high rock. Once Johnny and Gyro explain about the Boom Booms' ability, Tim comes to realize that he had been chasing the wrong suspect. The Boom Booms soon reappear, attacking the trio using their Stand and sending them colliding with each other. They are ultimately defeated by Johnny's awakened Tusk ability and Tim urges Johnny and Gyro to hurry and leave the area, as they all seem to have ended up in the Devil's Palm. The trio are then the first three to reach the midway checkpoint of the second stage.

Soon, Oyecomova arrives and Tim catches him in the hotel room rifling through Gyro's things. When he grabs Oyecomova's shoulder, a chunk of skin comes off and soon blows up, heavily injuring Tim. However, Tim was able to scatter his body parts and survives. He warns Gyro when Oyecomova tries to attack, telling the secret the latter's ability. Tim subsequently drops out of the race to recover and devote his entire attention to assisting the sheriff.

When Mountain Tim shows up later, it is at the behest of Lucy, who had called him to help her escape from the president's compound. He saves her from an otherwise impossible situation, revealing that he has loved her since their first meeting. He is disappointed when she apologizes for having potentially led him on but advises her to seek out Johnny and Gyro if she gets into trouble. After they go their separate ways, Tim is confronted by Blackmore, who had traced a call from the president's compound to him. Tim refuses to reveal who had made the call but is unable to defeat Blackmore's Stand ability due to the latter's advantage in the rain. Ultimately, Tim suffers severe wounds and is subsequently shot in the head upon refusing one last time to surrender the name of the caller. 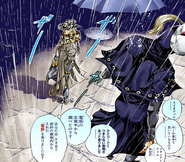 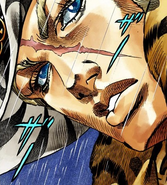