Mr.President (ミスター・プレジデント, Misutā Purejidento) is the Stand of Coco Jumbo, featured in Vento Aureo. It serves as a safe room for the protagonists during their mission.

Mr. President grants a supernatural ability to Coco Jumbo and, as such, it doesn't have a conventional appearance. It is, however, linked to a unique location accessed with an ornate key embedded within a transparent precious stone.

The room created by Mr.President resembles that of a hotel room, containing several pieces of comfortable furniture, a functioning television set and a refrigerator holding drinks. However, it does not include a bathroom.[2] The objects in the room can be destroyed (Due to them not being the part of the stand), but it is unknown if the room itself can be destroyed.

Mr.President has no combat ability whatsoever, but its power to have an entire room's space inside a turtle makes it very useful as a mobile hiding spot.

When one places a special key into the depression located on Coco Jumbo's shell, they can access a room "within the turtle".[3] This activation method, however, appears to have been trained.[4]

By simply approaching the hand on the key, one can "sink" inside Coco Jumbo and find themselves in a plain room inside the animal.[3] Inversely, by only raising the arm, the room's occupant can exit the turtle.[2] Removing the key from the shell's depression forcibly ejects the room's occupants.[5]

The transparent jewel on the key allows people to peek from either side of the room's ceiling, although those outside may see them as very small, while those inside will see people many times taller than them.[6] It may indicate that people actually shrink in order to fit inside Coco Jumbo. Sound is portrayed inconsistently, with those inside the room at times conversing with each other normally or even shouting in panic with no sign that they can be overheard by anyone near or even holding Coco Jumbo, and other times the room's occupants will hold conversations with outside comrades. Similar to exiting the room, it may be that one has to direct their voice towards the outside in order to be heard. Alternatively, Mr. President may be able to react to the occupants' desire to be heard or unheard through an unknown mechanism.

The room doesn't protect its occupants from Stand powers, thus The Grateful Dead's power which affects everything within its range could age Team Bucciarati hidden inside the room, as well as Green Day's mold being able to breach the entrance.[7] Thankfully for the occupants, moving the turtle around or even inclining it won't affect the room. 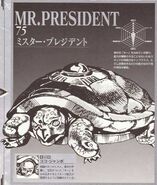 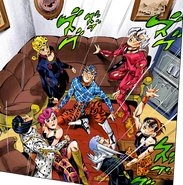 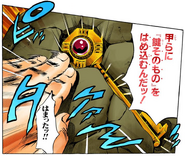 Mr.President with the key fitted in

Trapping The Boss inside