He is a loyal assassin for DIO and the User of an agile long-distance Stand known as Geb. He is the first of the Egypt 9 Glory Gods the Joestar Group encounters upon entering Egypt, attacking them in the middle of the Sahara.

N'Doul is a man of athletic build and medium height, keeping unkempt dark hair and whose blank eyes are always near shut due to his blindness. He wears a simple T-shirt over which he keeps a stripped overshirt and a drape to protect himself from the sun. N'Doul also wears armbands and simple trousers and shoes. He wears a headband and two earrings which look like bracelets.

N'Doul is a proud Stand user extremely loyal to DIO.

Calling himself "the great N'Doul", he is confident in his ability and didn't hesitate to take on the whole Joestar Group during his encounter with them. Even when cornered by Jotaro, N'Doul simply puts everything in a death-or-glory attack instead of begging like others usually do. He also shows hints of an honourable mindset by revealing some key information to Jotaro as a prize for defeating him. However, N'Doul can also be slightly overconfident and was almost lured in the open by Avdol.

N'Doul has mentioned that he's had his Geb since youth and never feared anything thanks to its power. During his fight, N'Doul has shown to be very attentive of his enemy's movement and carefully analyzed their every move.

Despite his pride, N'Doul mentions that he only wanted to live after meeting DIO. Charmed by DIO's aspects, N'Doul became fiercely loyal to the Vampire, even going as far as killing himself with his own Stand after his defeat, to ensure he would not reveal any of DIO's secrets to the protagonists. Unlike many villainous Stand users, N'Doul respects his opponents' abilities; he happily compliments them when they take him by surprise as Avdol did with his ring trick and later when Jotaro snuck up behind him.

N'Doul is aware that DIO and him are evil people, yet he relishes in his evilness.

Geb is a long-range Stand made of water. N'Doul can remotely control and shape into anything to attack his foes from afar, notably as a sharp water stream able to slice flesh.

Enhanced hearing: N'Doul is blind, but has phenomenally sharp hearing. He is able to determine the position of a fly simply by listening to it fly or hear faint sounds such as grains of sand bouncing against an obstacle hundreds of meters away from him. Using his cane, N'Doul can feel vibrations coming through the sand even kilometers away from his position, memorize's multiple people's whereabouts or identify someone by analyzing the sound of their footsteps.

N'Doul was a blind man who, thanks to his Stand, never feared anything in his entire life, not even death. It allowed him to do anything he wanted and get away with it without consequences, as even the police wouldn't find out about his crimes, although no one ever saw his true value. One day, he encountered DIO and was charmed by his charisma, DIO being the only person to see his true value. N'Doul started to admire that man so much he saw him as his savior, later claiming that "even evil needs a savior".

N'Doul is introduced shortly after Iggy joins the Joestar group, when he kills the two pilots of the helicopter that Iggy came in. He attacks the Joestar group soon after, managing to injure Kakyoin's eyes and keep him from assisting the group for a period of time. After Avdol found out that N'Doul could only locate the group through the sounds they made, Jotaro forced Iggy to cooperate with them, as he was the only one capable of detecting N'Doul's attacks.

Iggy was uncooperative as to almost allow Jotaro to die in order to save himself, so Jotaro used Star Platinum to throw Iggy and The Fool at N'Doul, catching him off-guard. It is there that Jotaro gets to N'Doul in the commotion and defeats him. After being defeated, N'Doul killed himself to prevent his memories from being read by Hermit Purple, likely knowing that his own savior would kill him otherwise. Afterwards, in his dying breaths, he tells Jotaro of the other nine Stand users and of himself. Seeing his value, Jotaro buried N'Doul's body in his honor.

N'Doul appears in this game as a boss that the players face. The first few times, the player must select the "Idea!" option to retreat.

Unlike in the source material, N'Doul does not temporarily blind Kakyoin.

N'Doul was originally planned as a playable character in this game, as drafts exist that show how he would have fought, along with an Alessi form, and when hacking the game to choose N'Doul as a player character, he has several assets pertaining to this, such as an alternate color, animated life bar portraits, animated super move and VS screen portraits and a cut-in for the "Here Comes A New Challenger!" screen.

Ultimately he was rendered an unplayable mini-boss, where the player had to cross a desert stage dodging his Stand until they find him at the end of the stage and attack him, one hit causing an instant K.O. This special stage must be played as Jotaro in Super Story and can be played with any of the main heroes in Oingo & Boingo's Gallery Mode.

N'Doul makes his first playable appearance in Eyes of Heaven. He was confirmed for the game alongside Iggy, Old Joseph and Dio Brando (Part 1).

N'Doul is of the Stand User Style, but more specifically is he a Mode User. The player can switch control between N'Doul and Geb to alter the character's abilities, with Stand Mode being the more powerful.

As N'Doul is blind, he cannot lock onto opponents. He also doesn't possess any particularly powerful combo attacks, and his Normal attack combo involves the use of his cane for a 2-hit melee attack that downs the opponent in order to give him some time to create distance. He cannot move faster than a slow walk, and does not have any air attacks to boost jumping distance, making platforming difficult. N'Doul does not possess any sort of dash, limiting his already-slow mobility, but can expend stamina to dodge forward like all other characters. In place of a dash, N'Doul sends Geb forward in the direction he's facing, up to four times. Doing this will allow skills to be performed wherever Geb is.

He is paired with Wamuu in the Eyes of Heaven Tournament, defeating Lisa Lisa and Funny Valentine in the first round, but eliminated by Jonathan Joestar and DIO in the second. 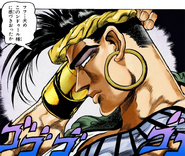 N'Doul using his cane as sonar

N'Doul in a duel with Jotaro

N'Doul and his Egypt 9 Glory Gods card of Geb

N'Doul with his eyes open 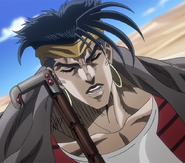 N'Doul using his cane as sonar

N'Doul collides with Iggy & The Fool

N'Doul and his Egypt 9 Glory Gods card of Geb

N'Doul, Heritage for the Future

N'Doul in Heritage for the Future

N'Doul's unreleased portrait from Heritage for the Future 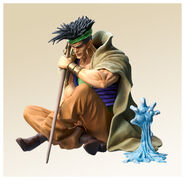 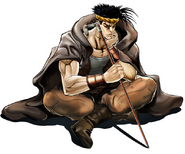 N'Doul's render from Eyes of Heaven

N'Doul during his DHA, Eyes of Heaven