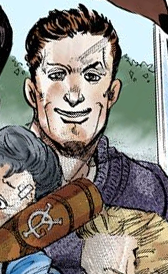 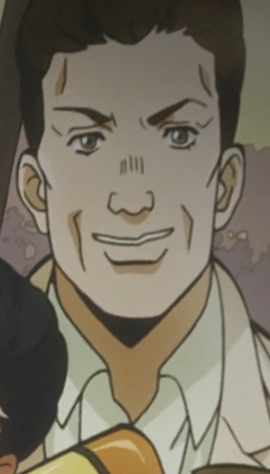 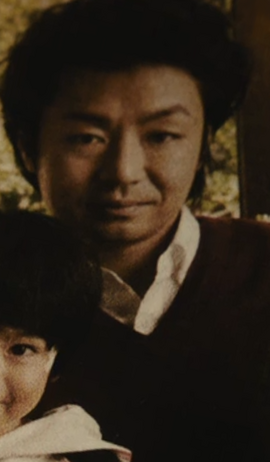 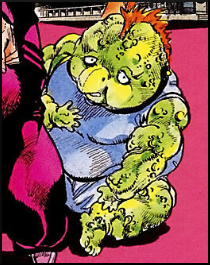 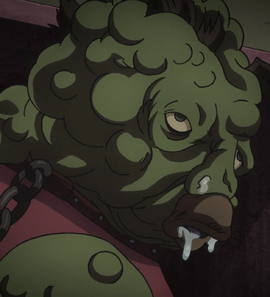 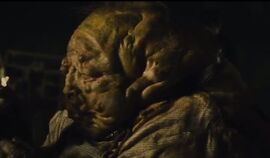 Crippled and deformed by one of DIO's implants after his death, he is cared for by his sons, Keicho and Okuyasu Nijimura.

Nijimura Sr. is a short, rotund creature with rough, blistered green skin, mismatched eyes, no ears, a squished nose, and puffy lips resembling a beak. He has a mohawk-like hairstyle with small bald patches in between. He wears a sleeveless shirt along with shorts.

Before his deformation, as seen in a photograph, he was a man of masculine features and short, dark hair, wearing a genial expression.

Nijimura Sr. is unable to communicate above a basic, animalistic level. Keicho assumed that he is unable to recognize his two sons and that he does not seem to possess much, if any, self and environmental awareness.

His sons were originally frustrated by his apparently-meaningless habit of searching through a chest in his room. He would take everything out of the box then cry, and had been doing the same thing for ten years. However, Josuke restores the torn objects on the ground to reveal that Nijimura had been searching for a photograph of himself and his young family.

Before his mutation, Nijimura was shown to be a man who loved his family. However, the financial stress and the death of his wife put a great deal of stress on him, which he directed towards his children. He agreed to work for DIO in order to keep his family's economic situation together, though it's implied that he still beat his children, possibly due to the grief of his wife's death and the guilt of making a deal with someone like DIO.

It is implied that Nijimura had a Stand, having been recruited by DIO during his Stand search. Whether his current survival is maintained in part by a formerly more pronounced Stand ability or it is simply the result of merging with vampiric cells inside of him is still up to speculation.

Nijimura seems effectively immortal and possesses extraordinary healing capabilities; his limb is shown regrowing back in an instant when removed. However, despite his apparently indestructible status, Josuke notices that his body is also abnormally flimsy: although completely without the intention of doing so, simply seeking to remove the peculiar contact, Crazy Diamond effortlessly punches Nijimura's right arm off when he is grabbing onto Koichi's leg during their first meeting. This is also an observation shared by Nijimura's eldest son, Keicho, as the latter once calls his father "a pile of rotten flesh".

It is suggested that Nijimura might not be able to return back to who he was before the mutation, as his cells have long since merged with DIO's spore planted inside of him.

Twelve years prior to Diamond is Unbreakable, the Nijimura family's matriarch died, leaving the father in depression. On top of that, Japan had been going through a tough time economically and the family soon fell into poverty. The father constantly abused his sons as a result.

Two years later, the patriarch started to receive letters with money and jewels. Much later in his life, his older son Keicho would realize his father had sold his soul and heart to DIO, who, at that time, was scouring the globe for a Stand user capable of recreating reality.

DIO, however, distrusted the Nijimura patriarch and implanted a seed of his undead body within him. When Jotaro defeated DIO, and when his younger son Okuyasu was only 7, the seed burst, causing the father to slowly mutate into a monstrous form, and later lose his ability to speak. This form would automatically heal any wounds inflicted. Keicho subsequently searched for a means to end his father's miserable life.

The Nijimura patriarch is first introduced as a bestial, unintelligent creature. It is kept on a chain and searches feverishly through a box for his family's photograph. However, Keicho misinterprets the action as mere insanity and angrily beats his mutated father for that reason. Only when Josuke examines the contents of the box and pieces the photograph back together is the patriarch finally pacified.

Later in the series, Okuyasu is seen attending his father when they meet with Josuke to discuss Yoshikage Kira's actions and to look after one another in case any of them may be assaulted. At the end of the series, the Nijimura patriarch is seen adopting Stray Cat and bonding with his new pet.

Nijimura transforming into a monster

Fumbling with paper scraps in his chest

Beaten by his own son, Keicho

Nijimura's last appearance, with a new pet
Add a photo to this gallery

The struggles of Nijimura's father

Being cruelly beaten by his son

Shocked at seeing the restored picture of his family

Nijimura's father and the other warriors of Morioh

Nijimura Father's Key Art
Add a photo to this gallery

Nijimura's Father After getting Punched By Josuke

Nijimura's Father Looking For Pieces Of The Old Photo

A Young Nijimura's Father With His Wife And Kids.

Nijimura's Father Continuing To Cry Over The Photo, Placing His Hand Over The Part With Keicho.
Add a photo to this gallery

Add a photo to this gallery

Retrieved from "https://jojo.fandom.com/wiki/Nijimura%27s_Father?oldid=359462"
Community content is available under CC-BY-SA unless otherwise noted.