SBR Chapter 95 - The World of the Stars and Stripes -Outro
Norisuke Higashikata (東方 憲助, Higashikata Norisuke) is a minor character featured in Steel Ball Run. He is an enigmatic Japanese competitor in the Steel Ball Run race.

Norisuke is a mature man of average to above-average height and medium build. He wears small, dark spectacles, a short beard, and very short, sparse hair; with his head covered in many small patches. Norisuke has two navels (although his ancestors only bore one).[1]

Norisuke displays some level of egotism, constantly pointing out his position of 1st place in the fourth stage and conspicuously using to go first when getting some water. He also shows great pride in his two navels for getting him into the newspaper.

Despite his old age, Norisuke has shown to be rather perceptive, deducing Hot Pants' true nature from the latter's disgust at touching his navel.

According to Tsurugi Higashikata's explanation of the Higashikata family's superstitious beliefs of warding away "demons of sickness", Norisuke, being the firstborn son of his family, was raised as a girl until age twelve.[3]

Norisuke is able to place 1st during the fourth Stage of the Steel Ball Run race. Following the end of the fourth stage, Norisuke is seen trying to get water for his horse while talking with Hot Pants about how he had gotten first place. He directs her to a newspaper with an article of him, revealing the fact that he had two navels. According to the newspaper, Norisuke's navels were one of the oddities of the world and current research was being conducted on them by several medical experts. He asks Hot pants if she wanted to touch them, though she refuses out of disgust. He states that she had made the right choice, as it would have been improper of someone like her to touch it.[1]

During Gyro and Johnny's fight with Sandman in the 5th stage, Norisuke is seen watching from afar from within the field of corn. Initially suspected to be the owner of the enemy stand, he walks towards the protagonists to ask them of the current situation, only to be stabbed from behind by Sandman. At the end of the fight, he appears to be fine, presumably healed by Hot Pants.

Norisuke Higashikata finishes the race in 2nd place[4] with a total of 353 points. In the aftermath of the race, he is seen on board the ship that Johnny Joestar boards, and greets him with a salute. A younger Japanese woman is seen standing beside him which is eventually revealed as his daughter Rina Higashikata.

Norisuke uses the prize money from the race to start a successful business importing foreign fruit - a business his descendants continue to maintain well into 2011.

Norisuke had also written a complete record of the Steel Ball Run, detailing the statistics and results of the race. In the back of the book is a Higashikata family tree where it's describes his family, consisting of his wife, Teru, and their 4 children.[5]

Norisuke's first appearance, his weapon commented on by Gyro and Johnny 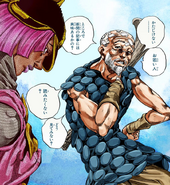 Norisuke introducing himself to Hot Pants 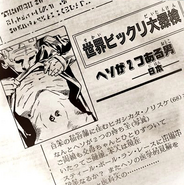 Norisuke in the newspaper
Add a photo to this gallery

Retrieved from "https://jojo.fandom.com/wiki/Norisuke_Higashikata_I?oldid=340359"
Community content is available under CC-BY-SA unless otherwise noted.