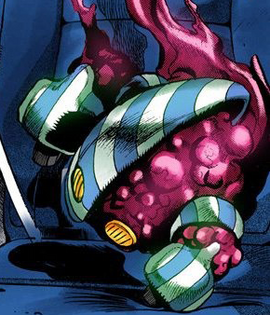 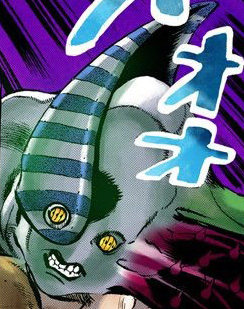 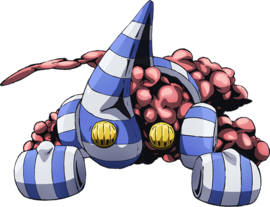 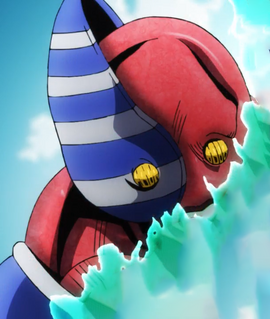 Chapter 532 - No Flightcode! Headed for Sardinia

In its brief appearance with its user alive, Notorious B.I.G seems humanoid. It wears a striped half-mask rising in a peak above its head and extending over its right eye. Its teeth are bared in a snarl, although it's unclear if this is a permanent expression or merely its reaction to Carne's injuries.

After reactivating itself following its user's death, Notorious B.I.G. begins developing a body of blobby flesh. Once large enough, it develops a crude form with two small limbs and a tail. It gains the eyes and mask of its previous form, along with armored bands on its body and shoulders and tiny, wheel-like "hands" at the ends of its arms.

After consuming enough matter, Notorious B.I.G undergoes a second transformation into a much larger monster. It becomes big enough to fill up the entire end of a plane's cabin and its arms become two stretchy tentacles. Its pointed helmet now curls over the top of its head and the Stand now possesses a mouth filled with blunt human-like teeth.

In both the colored manga and PS2 video game adaptation, Notorious B.I.G is portrayed as being primarily purple, with white and blue striped body parts and yellow eyes. In the anime adaptation, it becomes flesh red.

Notorious B.I.G. has an almost animalistic personality, seeking only to devour things to further its growth. However, it appears to communicate with Giorno when it begins to develop on his arm, revealing information about itself that its current target couldn't possibly know (such as its name and the nature of its existence).

Notorious B.I.G is one of the few Stands that can still be active even after the user's death. Coupled with its ability to grow by absorbing energy, even that of attacks, Notorious B.I.G can be said to be truly invincible. However, as an automated Stand, it can be bypassed.

While Notorious B.I.G can be summoned while Carne is alive,[2] the Stand is said to only activate upon its User's death, drawing energy from Carne's grudge. This is one of its main features and gets rid of a potential weakness. Initially, Notorious B.I.G seems to have no body after the death of its user, instead constructing one by absorbing matter and energy from an outside source.[3] As this body is made of physical matter, it is vulnerable to mundane damage such as being flung into objects[4] or getting impaled;[5] however, any surviving pieces will remain active and capable of regenerating themselves.

Upon activation, Notorious B.I.G slowly infects anyone that has touched the remains of its user and eats away at flesh and energy in order to grow a body; this includes Stand energy[6] and energy from automated objects like an engine.[3][5] Through this ability, Notorious B.I.G can grow to a great volume with enough energy, eventually reaching a size comparable to a jet plane. More importantly, one speck of it can completely recover from near-destruction as long as it reaches a source of energy to feed on, making it nigh-impossible to defeat.[5]

Its ability to absorb Stand energy makes it immune to Stand attacks, enabling it to seek out Stands in order to feed on them.[7]

In its initial growth phase, Notorious B.I.G. can influence its host's body, causing them to perform actions without being consciously aware of them. After infecting Giorno, it somehow made him take some of Carne's fingers and put them into a plane's freezer; later, it used a pen to write out Giorno's thoughts on the wall and window.

While Notorious B.I.G is blind, it can detect movement around itself, driving it to automatically attack the fastest moving object within range.[7] It is never explained what objects within its range it considers stationary, so it is open to interpretation. After detecting the object moving the fastest, it accelerates itself until it can latch onto its target; at one point, it becomes fast enough to catch up with a plane flying at 800kph.[8] This trait makes Notorious B.I.G.'s behavior predictable if one is aware of it​​​​​​;[7] the Stand can be distracted with various objects like the moving hand of a clock[4] or a motorized seat​​​​​​[9] as long as nothing is moving faster than it. This also secures its prison in the ocean; the constant motion of waves and currents confuses Notorious B.I.G. to the point where it can no longer attack anything besides the odd passing boat.[10]

Notorious B.I.G was originally the humanoid Stand of Carne, though nothing was known about its abilities then. Carne is sent on a mission to kill Passione's traitors, but is immediately killed by Mista. However, it is eventually revealed that Notorious B.I.G survived after Carne's death and latched onto Giorno's body when he attempts to confirm the enemy's demise, only making its presence known well after the plane takes off. Consuming Giorno's arm to grow, it attacks and incapacitates Mista and Narancia in rapid succession.

Although Giorno succeeds in throwing the Stand outside by cutting off his remaining hand, it quickly catches up to the plane and begins to attack Trish before shifting its focus to Giorno's brooch, which Gold Experience turned into a hand earlier. Trish's attempt to protect Giorno's hand leads to the awakening of her Stand Spice Girl, which allows Trish to impale and seemingly destroy Notorious B.I.G. In actuality, a piece of the immortal Stand entered the engine room and absorbed the energy of the engine, causing it to grow huge.

In defiance of Bucciarati's plan to crash the plane, Trish tears the plane apart with Spice Girl, turning the cockpit into a makeshift parachute while the majority of Notorious B.I.G chases the larger, faster-falling part of the plane into the Tyrrhenian Sea. While a small piece of the Stand is found on Abbacchio's hair, Bruno attacks it with Sticky Fingers, causing it to attach to his arm. Trish then cuts off her arm to send it into the sea. Notorious B.I.G remains alive and active in the Tyrrhenian Sea, occasionally chasing down and destroying quickly-moving ships; this behavior leads sailors to call it "TyrrhenianW's stomach".

Notorious B.I.G appears as the enemy faced in Chapters 14 and 15 of Super Story Mode, with the player taking control of Trish. While Trish can, in theory, defeat Notorious B.I.G without reaching the ladybug brooch turning into a hand by Giorno, doing so is a very tedious and difficult process. The Stand will wander the plane aimlessly until something moves. It is then that Notorious B.I.G will leap at whatever has moved and attack it. For Trish, moving in any way shape or form will draw Notorious B.I.G's attention until she stops or is attacked. The Stand only has one move against Trish: It will jump on her head before knocking her all the way to the front of the plane, resetting her progress towards the brooch. If Trish gets to the brooch in the back of the plane, she will awaken her Stand Spice Girl, allowing her to effectively defeat Notorious B.I.G. 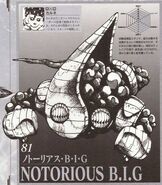 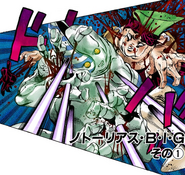 Attacked by Mista as Carne dies

The Stand's first re-manifestation after Carne's death, as finger pieces

The fingers slowly growing and multiplying 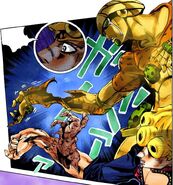 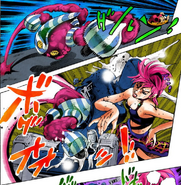 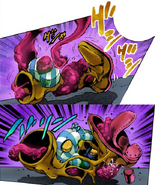 The Stand chases Trish through the plane
NotoriousB.I.GDefeat.jpg
Notorious B.I.G is defeated

Alongside its former master as he dies.

The Stand manifests itself as fingers.

Checked for signs of life by Gold Experience.

Giorno notices too late that the Stand was already attached to his arm.

The writing done by the Stand controlling Giorno's arm. (Original with Japanese subtitles)

Consuming Giorno's hand after being shot off by Mista.

Trish desperately attempting not to attract the Stand's attention.

Notorious B.I.G as a sea monster 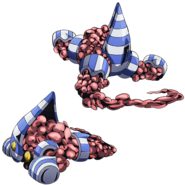 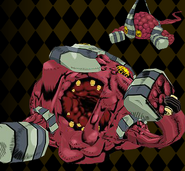 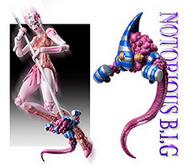