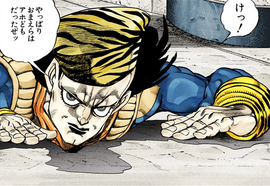 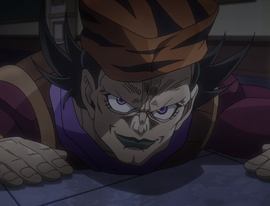 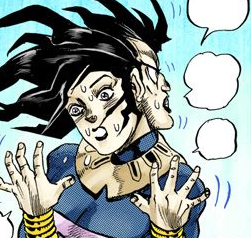 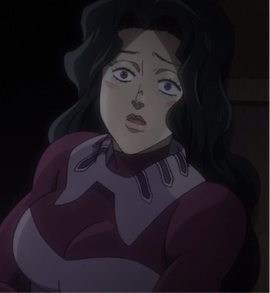 Quartered and obliterated by Dio Brando

Heritage for the Future
Nukesaku (ヌケサク, Nukesaku) is a minor antagonist featured in Stardust Crusaders.

He is a henchman of DIO that tries to attack Jotaro when the Joestar Group has defeated DIO's other minions. Having no Stand, he is used as a punching bag and unwilling guide in the mansion. Nukesaku is the penultimate vampire depicted in the series.

Nukesaku is a small, pale-skinned male vampire. He keeps long, unkempt hair and has a second, female face on the back of his head. He also has female breasts on his back, which he keeps covered using his breastplate while assuming his natural form. Nukesaku wears a dark jumpsuit over which he sports an assorted vest and boots, a loincloth, multiple ringlets on the wrists and ankles, and an animal print taqiyah.

While in his female disguise Nukesaku wears simple earrings, a light dress and a stylish belt.

Nukesaku suffers from an inferiority complex due to his abilities being looked down upon by DIO's other henchmen, who refuse to let him join the battle. When they are defeated, Nukesaku immediately jumps at the chance to demonstrate his abilities and defeat Jotaro and company, but is careless in the placement of his body parts. Even when he is forced to lead the group up to DIO's tower, he still maintains a sinister belief that DIO will use the opportunity to defeat the Joestars, and is greatly surprised when he realizes that his master has turned against him, humiliated, and killed him instead, demonstrating that even DIO found his abilities useless.

Nukesaku apparently suffers abuse from the rest of DIO's allies, being treated as a burden due to his lack of Stand power, to the point of being given the title "The Idiot". Even when there's very few Stand users left to guard DIO's mansion, they threaten to kill him should he interfere. After the ones left (Vanilla Ice, Kenny G. and Telence T. D'Arby) are defeated, Nukesaku sees his chance to prove his value.

Nukesaku attempts to use his ability to trick Jotaro and company into believing he's an innocent woman trapped in DIO's mansion. He, however, is greeted with a punch to the face by Star Platinum, and it is then that Jotaro tells him that he was careless. Nukesaku notes that he forgot his thumbs pointed in the opposite direction when he was clasping his hands. He is forced to lead the group to DIO and believes that DIO will use this opportunity to defeat the Joestars, but when he removes the lid of his master's coffin, he finds himself sectioned to pieces in the coffin instead shortly before DIO kills him.

As a vampire, Nukesaku has the natural ability to dislocate his body parts. In conjunction with his "Female Face", he can use it to trick people into believing he's actually just an innocent woman.

Female Face: Nukesaku has a female face on the back of his head, along with breasts located on his back. Using the female face, he can use it to talk and make expressions. While somewhat useful, he often forgets to fixate his body to match the way this face is looking.

Nukesaku appears on the cutscene where the group find DIO's coffin and he appears inside totally injured, much like the original story line. Nukesaku can also be a playable character via Alessi's Stand ability on DIO character, where instead of becoming a younger version of himself, DIO will turn into Nukesaku, who can only run away or use medium punch.

If censorship (regulation in the arcade options, triggered by certain region settings) is enabled, or in the HD remake, expressions disabled, he will instead be wholly trapped inside DIO's coffin in utter disbelief, without the dismemberment of the original, and the crusaders leave him helpless upon realizing DIO is in the vicinity.

Nukesaku appears as a stage hazard on DIO'S MANSION stage, after one of the players is thrown into the hazard indication area, Nukesaku will appears on the stage's wall. Excited, he will drop down on a location equally distant between both fighters, skewing towards whichever character has more health. Characters he lands on will bounce on the ground and take considerable damage. If hit himself by any source, Nukesaku will be sent reeling before retreating back to the ceiling. Attacked or not, he will continue to drop down from the ceiling periodically for the rest of the match.

For betraying him, Nukesaku is killed by DIO and placed in his coffin

Nukesaku listens in wait for the group

About to ambush the remaining Crusaders

Shocked that his ridiculous plan failed

For betraying him, Nukesaku is killed by DIO and placed in his coffin

Nukesaku in Heritage for the Future

Nukesaku as he appears in All Star Battle