Drowned in a jacuzzi by Jobin Higashikata

Ojiro is a surfer who ambushes Josuke Higashikata and Yasuho Hirose at Yoshikage Kira's apartment in order to have revenge on Kira for goading him into eating his fingertips. He later confronts Tsurugi and Jobin Higashikata to help his girlfriend Makorin get revenge on Mitsuba.

He is a Stand User who can specifically control limbs through his Fun Fun Fun.

Ojiro is a man of average to above-average height and athletic build. He has light hair, short or shaved except for a light sweep at his front, and very thin eyebrows. As noted by Yoshikage Kira, he has a very visible tan that causes him to stand out, which is much more visible in his later appearance. His most notable feature is his disfigured fingers, which Ojiro bit off down to the 2nd joint due to the emotional distress caused by Kira's treatment of him.

When he meets Josuke, he is wearing a shirt with a bowtie, along with a jacket and gloves. All of his clothes have his Stand's "Q"-like symbol patterned across them. In his later appearances (both in flashbacks and after his reappearance in Chapter 87), he is bare-chested and wears a puffy jacket.

Later in Jojolion, he has his Stand's symbol tattooed onto his chest, prosthetic fingers to replace his missing ones, and cross-like markings in his hair. He also has belt and shoe buckles shaped like his Stand's symbol.

Ojiro has strong sadistic tendencies, having used his Stand to toy with or torture a girl who accepted his invitation to go with him to the beach. He also believes that because of his Stand's power, he could theoretically get away with murder despite having never killed a person.[3] He is consumed with a desire for revenge against Yoshikage Kira for the arbitrary harassment the latter committed against him that ultimately led to the loss of his fingertips.

Ojiro is proud of being a surfer, happy to call it his job.

Ojiro's Stand is Fun Fun Fun, with the ability to control the body of a person underneath him.

Ojiro developed a Stand in his childhood. The house where he grew up was completely leveled by the earthquake and one of the Wall Eyes rose on that spot.

Ojiro, in his adult life, was using Fun Fun Fun's ability on a woman and submerging her in water at the beach when confronted by Yoshikage Kira. Kira, appearing from behind Ojiro, insulted his occupation as a surfer by questioning whether surfers were men of the sea or men of the land. Kira later encountered him in a ramen shop near a port, and relayed the same question. After warning him to stay away from the coast, Kira then forced Ojiro to leave by inserting an explosive bubble within his face. As he ran out, Ojiro accidentally bumped into Josefumi Kujo, causing the latter to spill an excessive amount of pepper into his ramen.

Some time after this encounter, Kira began questioning Ojiro whether or not he was even a man at all, and Ojiro was ultimately coaxed by Kira into eating all ten of his own fingers under the influence of alcohol in an attempt to prove he was a man.

After this incident, Ojiro swore revenge on Kira and was the one responsible for setting all the traps in the apartment room, planning to attack Kira when he returned. Additionally, in order to remove anyone who might be associated with Kira, Ojiro planted photo albums of bound women in the apartment.

He initially mistakes the protagonist to be Kira, attempting to kill him with his Stand. Once defeated, he realizes his mistake, while still acknowledging a certain familiarity. He explains that he is not Kira, along with his grudge against the latter. Following the interrogation, he is then knocked out.

Much later, Ojiro reappears at a condo, relaxing in a jacuzzi. He is accompanied by his girlfriend Makorin, who previously appeared at a school meeting for Tsurugi Higashikata and was told to move her "forepaw" by his mother Mitsuba. He discreetly grabs a few yen bills from her purse as she rants to Ojiro about her failed attempt to obtain the valuable land where the Higashikata House and orchard now sit atop of. Ojiro's interest is piqued when the woman begins talking about the rumors of equivalent exchange.[4]

Ojiro takes pictures of the Higashikata Fruit Parlor and the Higashikata Family while littering all the trash of his food on the street. He meets up with Tsurugi Higashikata near the Higashikata house and taps his hand in order to place Fun Fun Fun's mark on him. Ojiro tells Tsurugi that he's looking for Tamaki Damo's laundry services, revealing that Jobin Higashikata was working with him to launder money. He threatens Tsurugi to tell him where he can get a Locacaca fruit or else his dad will go to jail. However, Tsurugi uses Paper Moon King to make Ojiro almost fall off a cliff.

Ojiro returns on the roof of the Higashikata house and begins using Fun Fun Fun to control Tsurugi and take a video of the Locacaca using his phone. Using a different phone, he tells Makorin what he has learned of and sends her a picture of the Locacaca. He resolves to go steal some of the fruits.[2]

He manages to steal the Locacaca from the Higashikata house and thinks he successfully escaped after getting control of Tsurugi and Jobin. However, Tsurugi made an illusion with Paper Moon King to look like him and Jobin died. In reality, Jobin set Speed King on Ojiro's body and boiled his blood vessels after he got away. Jobin then followed him back to his girlfriend's condo and drowned him in Makorin's jacuzzi, with Makorin later suffering the same fate.[5] 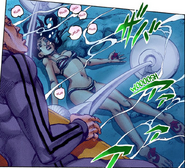 Using his ability on a random woman

Sasame has a bubble planted in his face by Killer Queen

Having his eyesight taken by Soft & Wet

Caught by Josuke after being defeated

Sasame's first appearance after a long absence, stealing money from his girlfriend 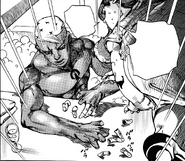 Sasame's prosthetic fingers are stepped on

Ojiro on the cover of JJL Chapter 87

Eating food outside of the Higashikata Fruit Parlor 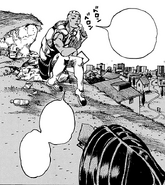 Asking Tsurugi Higashikata for directions to a laundromat

...only to find himself flying off a cliff

Dangling on a tree branch 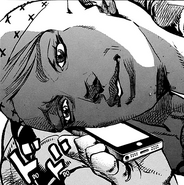 Talking to Makorin on the phone

Talking to Makorin while on the roof of the Higashikata household

Ojiro makes a "deal" with Jobin

Ojiro begins to feel the effects of Jobin's Speed King

As his blood vessels begin to burst, Ojiro sees an apparition of Speed King

Now blinded, Ojiro falls down a set of stairs