Outlaw Man (アウトロー・マン, Autorō Man) is a Japanese shōnen manga one-shot written and illustrated by Hirohiko Araki. It was included in a January 10, 1982 special issue of Weekly Shōnen Jump.[3]

Set in America during the pioneering era, "Outlaw Man" is pursued by the Pinkerton National Detective AgencyW after he is given a bounty. He rides through the desert, injured in his right hand from a previous encounter with them. He finds a man hanging from a tree, but he realizes that the man was faking to ambush him. The outlaw man shoots him down from the tree before the hanged man could shoot at him with his hidden revolver. The hanged man, or "Toothless" as he is called, is punished by the detective agency and killed for letting him get away.

Although the man managed to escape without leaving any footprints on the ground and traveled through the river to not leave any scent behind, the detective agency manages to find a small trace of his escape and persistently chases after him. The man's beloved horse, "Cameron" is eventually shot by the detectives, in an attempt to kill him. He puts Cameron out of her misery and flees. Just as it seems they got him, he tricks them, by making them think a rabbit in a bush was him. He shoots the rocks behind the ones the detectives are hiding behind, ricocheting the bullets back at them and hitting all of them. He then walks away, injured. The final shot being a bird catching a snake, from the beginning of the story. 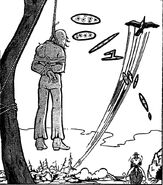 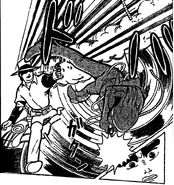 Outlaw Man shooting at the body, but the man faking to be dead attempts to counterattack 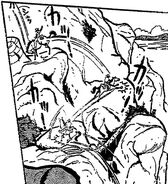 One of the detectives shooting at Outlaw Man and Cameron 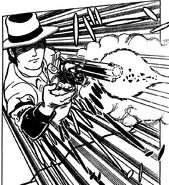 Outlaw Man shooting the Rocks behind the detectives, to ricochet the bullets

The detectives, dying and injured.