Boku no Rhythm wo
Kiitekure

Stop Gyro from continuing in the Steel Ball Run race

SBR Chapter 23
The Terrorist from
a Faraway Country (2)

Oyecomova is an escaped NeapolitanW terrorist who participates in the Steel Ball Run. Having heard of Gyro Zeppeli's participation, he seeks revenge on him and attacks Gyro alongside Mountain Tim and Johnny Joestar in the Rocky MountainsW.

Oyecomova is a Stand User who wields the Stand, Boku no Rhythm wo Kiitekure, which has the ability to create bombs out of almost anything.

He is a young man in his mid-twenties, with long dark hair and an odd sense of fashion: his make-up's theme is loosely based on the American flag and tattoos representing clocks cover his legs and arms. Interestingly, the netting-like veil over Oyecomova's face is meant to act as sun-protectant and an insect screen, which was meant to give him an advantage in the race.[2]

Oyecomova is a fairly disturbing individual. At first, he seems to be fairly passive, from where he actually warns others not to touch him due to his Stand. However, this is apparently a front—He has shown that he has no qualms about killing others, and displays fierce dedication to the missions he takes up, seen where he was ready to resume his plot to assassinate the King of Italy after killing Gyro Zeppeli. He also often claims that God's will is the cause of why he got where he was.

Boku no Rhythm wo Kiitekure allows Oyecomova to create and attach special time bombs to anything he touches, be it solid objects or even water and smoke. This make his very deadly to approach.

Even before acquiring his Stand, Oyecomova was an extremely skilled bomb maker, having become notorious for his deadly bombs and even managing to create a makeshift bomb in prison and use it to escape.

Oyecomova is a terrorist from Italy. A few years before the Steel Ball Run, he had attempted to assassinate the king by blowing up his carriage. It was the king's good fortune to not be in the carriage; however, five people—including two children—were killed. Oyecomova was arrested and imprisoned to await his execution, but within the prison he was being held at, Oyecomova managed to kill a guard by putting gunpowder in his ear. With this accomplished, he proceeded to make his escape.

Over time, his skills with explosives improved and eventually evolved into a Stand when Oyecomova entered the Devil's Palm. Using his Stand's abilities, Oyecomova attempted to assassinate Gyro Zeppeli, as well as anyone who got in his way; in his rampage, he blew up a hotel, nearly killed Mountain Tim and came very close to finishing off his intended target, which he had stated would be followed by him completing his previous mission of assassinating the king. He was defeated, however, thanks to a combination of Gyro's steel balls and Johnny's Stand. 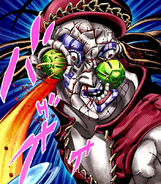