It's Only a Paper MoonW[1] (Popular song by Harold ArlenW and Yip Harburg, and covered by many artists)

Paper Moon King manifests primarily in the origami created by Tsurugi, which he may impart with a modicum of life, enabling momentary movement. It is typically folded to be shaped like a frog.

Paper Moon King presents itself as an ability and possesses no combat ability, whatsoever. Tsurugi doesn't seek fights and prefers to rely on the power of his origami to disorient people instead of harming them personally.

Paper Moon King also appears to allow Tsurugi to impart actual qualities of the object depicted in the origami into the creation. For instance, Tsurugi can shape an origami cicada that can fly or origami frogs that can hop and move on their own.[2]

He does not need to be around to enforce this effect, as all of his origami paper is under his Stand's thrall, as when Yasuho creates origami bananas without Tsurugi around, they still seem to be able to make Yotsuyu Yagiyama trip and fall.[3] This ability can also work with the Stand[4] s.

Tsurugi is also allowed to fold hard objects to the shape of an origami.[3]

Paper Moon King is able to remove the ability to differentiate between faces, objects, voices and texts if one of the origami models it creates touches someone.[2]

This renders the victim unable to recognize faces, resulting in seeing the same face on all people, even in reflections and in artificial faces such as in mannequins or video broadcasts.[5] In addition to other people's faces, those under Paper Moon King's power probably cannot differentiate between bodies, and voices, as Yasuho still mistook Joshu for Josuke despite having a conversation with him.[6] Moreover Tsurugi's victims can only read the same sentence in every text they might see[6] and it can also make them confuse two specific objects or person; for instance Tsurugi made Aisho Dainenjiyama see all leaves on the ground as Yasuho's origami phone.[7]

Paper Moon King first appears when Tsurugi somehow manages to fold Yasuho Hirose's cellphone into an origami frog, which then leaps at her to impart the stone disease before seemingly disappearing. Tsurugi then continues to use the origami to disorient Josuke before seemingly removing the effects from both of them. After Tsurugi explains his Stand to Yasuho, she later uses it in a successful escape from Yotsuyu Yagiyama. 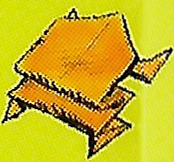 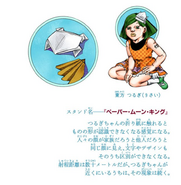