View source
watch 01:40
The Sandman Will Keep You Awake - The Loop
Do you like this video?
Play Sound
SPOILER WARNING: Part 5 Spoiler details may follow. 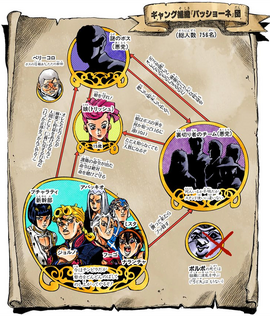 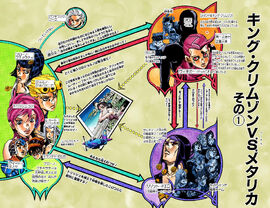 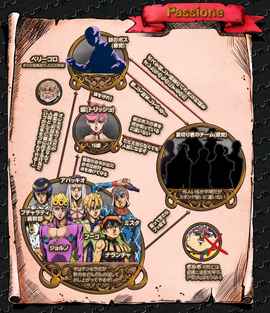 Chapter 448 - Meet the Gangster Behind the Wall, Part 1

Passione (パッショーネ, Passhōne, lit. Passion in Italian) is an ItalianW MafiaW gang serving as the main antagonistic force of JoJo's Bizarre Adventure Part 5: Vento Aureo, controlled by Diavolo. Protagonist Giorno Giovanna infiltrated the gang in order to seize control of it. It is remarkable by the secretiveness of its members and the unusually high number of Stand Users among them.

Passione is one of the most powerful gangs in Italy despite its reduced numbers, 757 members counting the newly recruited Giorno Giovanna.[1] The gang is based in NaplesW, but operatives from Rome and Venezia are not unheard of.

Diavolo is the gang's founder and first head, being called The Boss (ボス, Bosu) by his subordinates.

Directly beneath him is the Adviser or Consiglieri (参謀, Sanbou) who counsels the Boss and acts as a messenger between him and the adviser's direct subordinates: the Lieutenants or Caporegimes (幹部, Kanbu, lit. executives). The lieutenants are officers tasked with running the gang's business smoothly, usually being assigned a territory. Every lieutenant is also assigned one or several teams of gang members who are to obey them and are dedicated to one type of work, such as the drug deals (麻薬チーム Mayaku Chīmu, lit. "Drug Team"), assassination (チーム Hittoman Chīmu, lit. "Hitman Team"), bodyguard (護衛チーム Goei Chīmu, lit. "Escort Team" or "Bodyguard Team"), data analysis (情報管理チーム Jōhōkanri Chīmu, lit. "Information Management Team"),[1] gambling, or tax collection teams.

The most remarkable teams of Passione were La Squadra Esecuzioni, who were responsible for assassinations, and La Unita Speciale who operates directly under the Boss' orders. The gang's strangest member is Vinegar Doppio, who serves as the main cover for the Boss and works as his right hand, thus operating alone.

Like any gang, Passione generates income via illegal trades such as drugs and violently protects itself against any enemy, sending members to punish anyone who harms one of them as was the case with Luca.[3] It also entertains certain secretiveness as its members actively try to hide from the public.[4] However, the Boss of Passione has unusually introverted policies, refusing to personally meet anyone and giving orders through proxies. Diavolo spends his time trying to erase all traces of himself, ordering his own daughter to be brought before him so he could kill her. Moreover, any member who tries to uncover his identity is immediately branded a traitor and made an example of.

Passione seems to have poor discipline within its ranks, presumably due to the many vindictive Stand users in the gang. Corruption and infighting are not unusual, and comradeship doesn't exist beyond one's team. As a result, rebellion is omnipresent and many members plan to betray the Boss, some out of greed, others because they are dissatisfied that the gang is now dealing drugs, while they joined it because it claimed to fight the drug trade. Anyone betraying the Boss is condemned to death, to remind everyone of the risks of rebellion.

When a lieutenant dies, it is customary for his subordinates to attend his funeral.[5] Afterward, the next lieutenant is chosen by another lieutenant from among said subordinates who has performed a task greatly beneficial to the gang as a whole, for instance bringing several billions of liras' worth of jewels.[6]

Passione possesses a high number of Stand users despite having less than one thousand members, due to its harsh recruiting test. In order to join, one must be approved by a lieutenant in the gang through an interview. In Polpo's particular case, he is shown tasking Giorno with keeping a lighter alight for 24 hours. When the light goes out and is relit, Polpo's Stand automatically activates and attacks any witnesses with the Arrow. If it succeeds in stabbing someone, they will turn into a Stand user if they have enough spiritual energy. If not, they will die painfully. This is considered a cost-effective way to weed out the weak while simultaneously producing Stand users and reliable soldiers.[7][8] Moreover, as Pericolo points out, Polpo is the designated capo to handle Stand-related tasks. For instance, the order to protect Trish Una against enemy Stand Users would have gone to him had he not been dead at the time.[9]

Prior to the events of Vento Aureo, Passione controlled Naples' hotels, port construction sites, and restaurants. Its main businesses were originally gambling and drugs.[4] The latter drug trafficking was said to be worth billions of liras.

It can be presumed that Giorno Giovanna put an end to the drug trade, having joined Passione to stop it in the first place.

Diavolo founded Passione during the late '80s, presumably in 1986, which saw a dramatic rise in crime all over Europe.[10] During this early period, Passione pretended to fight the drug trade, but instead was setting up its own operations. Passione eventually became one of the most powerful gangs in Italy, in no small part due to the Stand users within its ranks.

It was during this time that the seeds of Diavolo's demise were sowed, first when Jean Pierre Polnareff began to track the whereabouts of the Bow and Arrow in Europe. Diavolo learned of Polnareff's investigation into his identity and immediately confronted him in battle, backing him to a corner. However Polnareff escaped and, unable to get out of Italy unnoticed by the powerful Passione, went into hiding and waited for potential allies.[10]

Over the years Passione expanded, recruiting more Stand users. When Risotto Nero was recruited as an assassin by the gang in 1994, he formed La Squadra Esecuzioni . La Squadra Esecuzioni eventually grew dissatisfied of the mistrust the Boss had of them and asked for a territory instead of mere bonuses for each kill. After the Boss refused their request, Sorbet and Gelato began to investigate the Boss only to be made an example of. La Squadra never forgot the humiliation.[11]

In January 2001, Donatella Una, the Boss' former lover died, leaving behind her daughter Trish. Donatella's search for a man named Solido Naso, one of the Boss' pseudonyms, caught the attention of Passione, and the Boss, recognizing his daughter, ordered her brought to him. At the same time, he had sent Risotto, Ghiaccio, Illuso, and Prosciutto to investigate Donatella's room and erase all traces of him. Unbeknownst to him, La Squadra still sought vengeance for Sorbet and Gelato and decided to track Trish Una as she could lead them to the Boss.

Giorno Giovanna joined the gang on March 30 with the intent to overthrow its Boss and seize Naples from him. Giorno was cooperating with Bruno Bucciarati, a gang member who was disgusted with the drug trade and wanted to put an end to it, and Bucciarati introduced Giorno to the lieutenant Polpo to have him admitted within the gang. Immediately upon his admission, Giorno assassinated Polpo, which enabled Bucciarati to become lieutenant in his stead. Bucciarati and his team were subsequently tasked by the Boss to protect Trish from Squadra Esecuzioni and bring her to Venice. Team Bucciarati managed to defeat and kill all but one man of the assassination team and brought Trish to Venice to meet her father.

The Boss then attempted to kill Trish, a move which outraged Bucciarati and he openly rebelled, swaying all but one member of his gang to follow him. Team Bucciarati, under Trish's counsel, went to Sardinia to investigate the Boss's past, defeating the members of Diavolo's Guard Squad sent after them, and forcing him to personally intervene. In Sardinia, Diavolo defeated the last member of the assassination team, Risotto Nero, and also killed Leone Abbacchio, whose rewinding powers enabled him to uncover past events. Fortunately, Abbacchio had successfully recreated a negative of Diavolo's face and handprints.

Team Bucciarati's search for the Boss' identity caught the attention of Polnareff, and he proposed that they meet in Rome to acquire the Arrow, which would unlock a power enable to defeat Diavolo. They then departed for Rome, followed by the Boss. In Rome, the last members of Diavolo's Guard Squad, Cioccolata, and Secco managed to slow Team Bucciarati enough for Diavolo to catch up to them and even confront Polnareff first, killing him. However, the Arrow transformed Polnareff's Silver Chariot into Chariot Requiem, a Stand able to manipulate souls, tasked with the protection of the Arrow. This began a frantic race between Diavolo and the remnants of Team Bucciarati to seize the Arrow first, and with Bucciarati's sacrifice, Giorno Giovanna took the Arrow and unlocked Gold Experience Requiem.

The Requiem Stand defeated Diavolo, and Giorno sheltered the Arrow within the turtle Coco Jumbo afterward before taking Diavolo's place as the second Boss of Passione.

GioGio's Bizarre Adventure 2: Golden Heart, Golden Ring provides further precision on Passione's operations. It notably introduces Sogliola Lopez as a lieutenant of Passione based in Venice, who is responsible for the explosives trafficking operations of Passione. It also introduces Rigatoni, an independent Passione assassin specialized in dealing with Stand users.

This novel describes Pannacotta Fugo subtly aiding Team Bucciarati in Venice, then departing without having clearly chosen a side.

It also introduces Sheila E, a Passione operative assigned to Pannacotta Fugo, Gianluca Pericolo, son of Pericolo, another gang member who personally serves Giorno Giovanna, and Cannolo Murolo who is the leader of the Sezione Gestione sistemi informatici (情報分析チーム, Data Management Team) responsible for spying and communication within Passione.

The novels details the activities of Passione members, Pannacotta Fugo and Leone Abbacchio, who committed murders ordered by Passione behind Bruno Bucciarati's back. It also adds that Sale and Zucchero survived their respective fights and went rogue, but were killed respectively by Vittorio Cataldi and Sheila E.

Prior to the events of Vento Aureo, Diavolo created the narcotics team in order to make a profit. Massimo Volpe's Manic Depression allowed him to synthesize high-quality drugs which deteriorated quickly, cutting the costs of paying for actual drugs and preventing anyone from taking control of a large quantity of it. The drug trade then made Passione extremely wealthy. It was said that even Diavolo didn't dare cross the team as Vladimir Kocaqi's power could even defeat him.

At one point in the past Sheila E joined Passione to kill the assassin Illuso, and Cannolo Murolo provided information on Trish Una to Squadra Esecuzioni, enabling them to know of her.

Six months after the events of Vento Aureo, the new Boss Giorno Giovanna legitimized his position by pretending to have been the Boss all along. Jean Pierre Polnareff became the No.2 of Passione and Guido Mista became No.3. Giorno Giovanna also settled a deal with the Speedwagon Foundation, who were worried with the rise of such a group of Stand users, and sent Pannacotta Fugo, Sheila E and Cannolo Murolo against the narcotics team which went rogue.

The trio successfully managed to kill all of the narcotics team, putting a definitive end to the drug trade. Their secret goal of destroying a Stone Mask in Sicily, which the narcotic team coveted, was also a success.