Suicide via gunshot to the head

GW Episode 9 - First Assignment From the Boss
The character featured in this article is sometimes referred to as "Belcaro".

Pericolo is a CapoW (operative) in Passione who retrieves Polpo's ¥600,000,000 from Bucciarati, grants him the status of an Operative, and passes on Polpo's last order from the Boss to protect Trish Una, the Boss' daughter. Unlike many of his co-mobsters, Pericolo is an ordinary human that does not possess a Stand.

Pericolo is a short, mature man, adorning a beard connected to his short hair and a mustache. One of his eyes constantly wanders, alternating between the two but never at the same time.

He is introduced in a janitor disguise but dons a suit for his later operations.

Pericolo greatly appreciates the boss for giving him a life when nobody else would take him and takes his job very seriously, to the point of committing suicide after passing on a message through Abbacchio's Moody Blues when presented with the order to do so. He is also a friend of Bruno Bucciarati, who greatly appreciates the old man's presence and advice.

The anime adaptation develops his character, showing him as a particularly amiable man despite his job. He is notably shown greeting Giorno Giovanna and welcoming him into the gang as well as warmly laughing when Mista and Narancia excitedly ask to touch Polpo's treasure.

Pericolo is introduced in a janitor disguise along with a disguised Trish Una. Upon receiving Polpo's treasure, he grants Bucciarati news of his promotion to capo and gives him his mission to protect Trish before leaving.

Pericolo is next shown through Moody Blues replaying his presence within Coco Jumbo's room. After relaying the message of a CD being hidden in a statue, he burns the photograph of the area the disk is in and shoots himself in the head to prevent himself from being caught and interrogated by the enemy. Unfortunately, the members of Squadra Esecuzioni piece together the photograph anyway and chase Bucciarati's group to their next location.

Pericolo's first appearance, disguised as a cleaner along with Trish Una 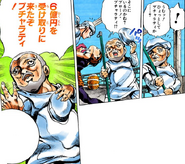 Pericolo reveals himself to Bucciarati 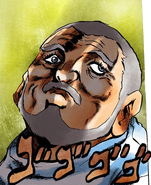 Close up of Pericolo's face 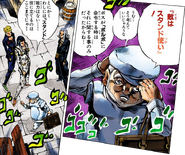 Pericolo in a suit

Pericolo disguised as a cleaner