Pesci is a member of La Squadra Esecuzioni. Together with Prosciutto, Pesci battles Team Bucciarati inside a high-speed train to Florence. He is a Stand User and uses his Beach Boy to great effects.

Pesci is a man of average to athletic build, being of under average height, his most prominent feature being his lack of any chin, more than likely caused by Klippel Feil syndrome, making him stand out among other characters. His hair is shaved, save for several green locks at the top of his head. Pesci also has cauliflower ears.

Pesci wears a dark jumpsuit with a fishing hook motif, complete with assorted arm warmers and shoes. Over that, he wears a sleeveless long coat decorated with fur. His right hand is bandaged after being shot by Mista's Sex Pistols.

Pesci is introduced as a weak-willed man, using threats when he should act, and is overall rather timid. Pesci lacks nerves and composure, panicking when the ice he uses to preserve himself from The Grateful Dead's power is destroyed and begs for his life when Mista has him a point-blank range. The TV anime adaptation also expands on his cowardice by showing his expressions of horror at the gruesome way people are killed in his line of work, most openly at Sorbet and Gelato's demise, and also expands on his rather meek and shy nature by showing his frightened reactions at small things. He is shown to also have a very submissive way of acting, often having no choice but to take the aggression that Prosciutto sometimes gives to him. Pesci is also initially shown to be very unconfident in his abilities and his intuition, something his superior, Prosciutto, points out and is seen cheering him on.

Later, upon being moved by Prosciutto's determination, notably still powering his Stand when crushed between the wheels of the train they are on, Pesci gains the confidence and ruthlessness necessary to make himself a serious threat to the whole group and nearly kills Bruno Bucciarati during their battle. Bucciarati notes, however, that Pesci's bravery is then replaced by cruelty when the assassin attempted to threaten his friends inside Coco Jumbo.

Pesci is shown to respect Prosciutto considerably, referring to him as big brother (兄貴 Aniki).

Appropriate to his namesake, Pesci uses the fishing rod-like Beach Boy to hook people from afar. The hook and line enter through the skin like water and attack by going for vital organs to kill. Pesci is also seen to be able to measure the weight of a person he has hooked.

Pesci is introduced as Prosciutto's junior, eager to complete their mission to kidnap The Boss' daughter, but also indecisive. He first appears alongside Prosciutto in Napoli's train station, tailing Team Bucciarati until they mysteriously disappear from the train. Using his Beach Boy, Pesci detects a suspect life-form and almost discovers the team's transport turtle, Coco Jumbo, but Prosciutto deploys The Grateful Dead, distracting him at the last moment. Afraid for his life, Pesci sets up bait on the air conditioner button and retreats to the bar wagon, sustaining himself on ice to counter the aging effect of The Grateful Dead.

When Mista tries to activate the air conditioning, Pesci detects him and almost hooks his heart, but Sex Pistols manages to destroy his ice, sending him into a panic and making him vulnerable to Mista. Almost shot down, only Prosciutto's intervention saves him. Encouraged by Prosciutto, Pesci finally leads his partner to Coco Jumbo but is then ambushed by Bucciarati. Sitting aside as Prosciutto battles Bucciarati, he is ordered to kill Trish's bodyguards but he hesitates, almost immediately sent flying into a window by Bucciarati's kick. Bucciarati loses the battle but throws himself off the train alongside Prosciutto. Pesci launches Beach Boy to save his partner, only to discover Prosciutto beaten and crushed inside the machinery of the train.

On the verge of complete despair, Pesci suddenly notices that the aging effect is still in effect. He regains the confidence to complete his mission and, encouraged by the extent of Prosciutto's determination, challenges Bucciarati, almost defeating him and even forcing him to admit that Pesci was more dangerous than Prosciutto in a one-on-one fight. Nevertheless, Pesci is defeated by Bucciarati when he attempts to kill the latter's companions inside Coco Jumbo, a move that Bucciarati deemed useless; he is separated into several pieces by Sticky Fingers and thrown into a nearby river, killing him.

Pesci appears as the enemy faced in Chapter 9 of Super Story Mode, with the player taking control of Bucciarati. The fight is set outside the train, a place where Pesci has a great advantage due to his Stand ability, Beach Boy. He will also appear unconscious next to the bar during Chapter 8 in the fight against Prosciutto, and Stand Shooting him will activate a Secret Factor.

During gameplay, Pesci will always get away as far as possible and use his Stand to try to catch the player. All of his attacks involve using Beach Boy to try to hook Bucciarati: if caught, the player must rapidly press buttons and shake the movement stick to set themselves free, or else Pesci will yank Bucciarati's heart and knock him down, dealing considerable damage. After some time has passed, Prosciutto, while near-dead, will activate his Stand ability, causing Bucciarati to slowly lose health.

Instead of sectioning Pesci into pieces using zippers and sending them into the nearby body of water like in the canon, Sticky Fingers simply Stand barrages Pesci into submission.

Pesci will first appear unconscious next to the bar during Chapter 8 in the fight against Prosciutto and Stand Shooting him will activate a Secret Factor.

Pesci appears as a stage hazard and situation finish on the Naples Train Station stage: both him and Prosciutto appear near the train during the beginning of the match, and after some time, board the train. If one of the fighters is knocked into the hazard indication area, Prosciutto encourages Pesci by saying he needs to trust himself, and then Pesci will throw his Stand's line into the stage. In a straight line perpendicular to the train, Beach Boy will shoot out of the train before being quickly reeled back: any character caught by it is sent flying into the side of the train with a soft knockdown.

As a situation finish, Pesci's Beach Boy hooks the opponent by the head/neck area: the train then takes off and the unfortunate loser is dragged away while both Pesci's laugh and Prosciutto's encouragement can be heard.

Both Pesci and Prosciutto appear as the stage hazards for the Naples Train Station stage: as soon as Prosciutto is defeated, Pesci will appear. His field of action is the space between the two trains with him patrolling that general area and his line of sight is a cone in front of him: anybody caught in it for too long is hooked and left stunned, vulnerable to their opponents before eventually being yanked and sent into the side of the train. As he will prioritize the fighter closest to him, Pesci himself cannot be damaged by any means, making him a permanent hazard for the rest of the match. 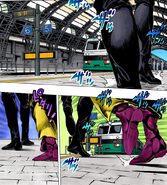 Prosciutto and Pesci recognized Bucciarati from a distance 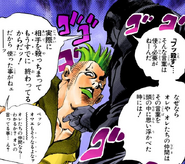 Pesci was reminded by Prosciutto about the importance of using words 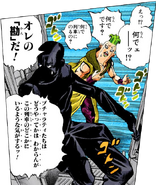 Asking his partner why he suddenly got on the train

Pesci using his Stand hook through the door of control room 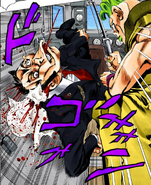 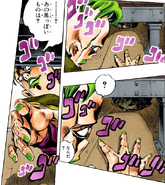 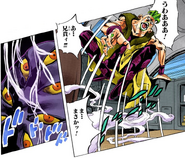 Discovers that his partner summons Stand 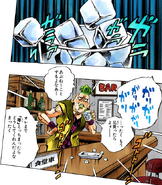 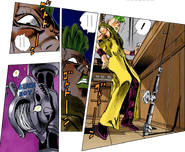 Pesci noticed someone hooked up

Pesci tries to drags Mista away

Hidden in the clowd of aging passengers 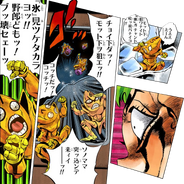 Panicked when saw the glass cup was destroyed by the bullets 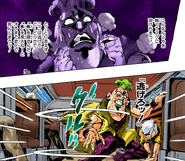 Pesci is unknowingly shielded by his disguised partner 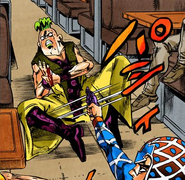 Pesci is threatened by Mista 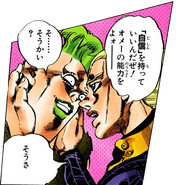 Pesci is comforted by his partner Prosciutto 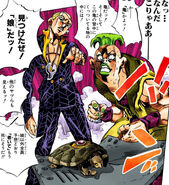 Kicked by Bucciarati into a window 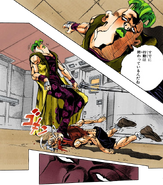 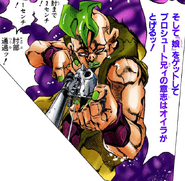 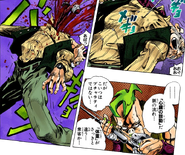 Pesci smashed the dashboard angrily and accidentally stopped the train 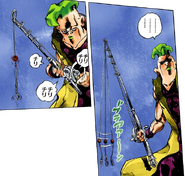 Pesci reclaimed the fishing line after the successful attack 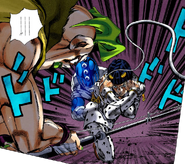 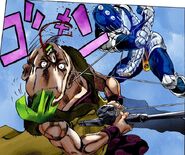 Frees Trish from the room of Mr.President

About to smash Coco Jumbo on the stone

Pesci enters Mr.President and attempts to kill Giorno, Abbacchio, Narancia and Fugo with his Stand 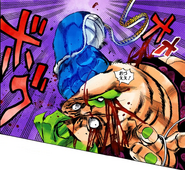 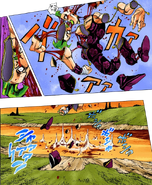 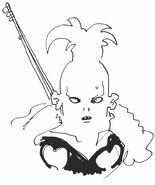 Pesci next to Prosciutto at a restaurant, chastised for drinking milk despite a bad stomach

Pesci and the others receive a mysterious package 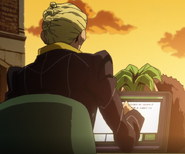 Pesci wants to avenge his former partners Formaggio and Illuso

Pesci's death at the hands of Bucciarati's Sticky Fingers

Pesci (and Beach Boy) in Uragirimono no Requiem 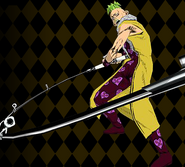 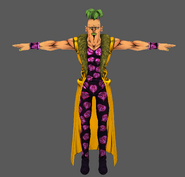 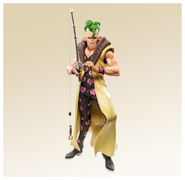