Beak shattered in pieces by Iggy

This vicious falcon is a member of the Egypt 9 Glory Gods, the guardian of DIO's Mansion, and is a Stand user wielding the ice Stand, Horus. When Iggy inadvertently stumbles upon DIO's Mansion, Pet Shop attacks him.

Pet Shop is classified as a falconW, sporting a strong bill, sharp talons, and excellent eyesight.[3] He wears an ornate falconry hood adorned with 3 feathers and a heart motif like the other inhabitants of DIO's Mansion. He also wears what appears to be a scarf.

A ruthless sentry who is loyal to his post, Pet Shop almost always bears a menacing glare and does not discriminate against any who trespasses DIO's mansion. He intended to kill a small boy and would have if it wasn't for Iggy's interference, and showed no remorse in eating the eyes of two dogs he decapitated in front of their owner. He is extremely relentless in hunting down his prey, as shown by his pursuit of Iggy, no matter how risky the path to his prey might be and is highly intelligent, having identified the beggar employed by Avdol as a spy and tearing up the photograph of the mansion after killing him to destroy his work.

Pet Shop's Stand Horus gives him the capacity to generate and manipulate ice, which he primarily uses to create ice spikes and propel them as makeshift missiles.

As a bird, Pet Shop possesses the natural ability to fly, which he does with extreme proficiency. For instance, Pet Shop is able to fly under a moving car. Moreover, because he possesses specialized air sacks to store air, he can breathe underwater and swim longer than even a dog. His eyesight is extremely sharp, which combined with his high-speed flying ability allows him to track targets which try to flee as Iggy did.

Pet Shop serves as the guardian of DIO's mansion in Egypt and is part of the Egypt 9 Glory Gods. He ruthlessly kills any who may trespass or he deems as suspicious. When he first appears, Pet Shop decapitates two large dogs with ease and crushes a beggar (employed by Avdol to find DIO's mansion) and his car with his Stand. Iggy witnesses this, but doesn't want to be involved, so he plays dumb. Pet Shop, with some suspicion, leaves him alone. He then returns to his post at the gate of DIO's Mansion and finds the young owner of the two dogs he killed climbing under it. He is about to attack and kill the boy when Iggy saves him, revealing himself as a Stand user.

The two begin to fight, and Iggy, not wanting to fight and somewhat overwhelmed by Pet Shop's abilities, retreats into a sewer, expecting Pet Shop to be unable to follow. This proves to be incorrect as the bird is both relentless and skilled with amazing aerial agility and even the ability to maneuver underwater for some time, easily cornering Iggy inside.

Pet Shop almost secures victory, trapping Iggy's leg in a block of ice and firing more ice at him. Unfortunately for Pet Shop, Iggy barely escapes this at the cost of his front paw, severing it himself in order to dodge. In the end, Iggy bites Pet Shop's beak closed as he attempts to fire an icicle out of it. Iggy bites down so hard, he crushes Pet Shop's beak in his jaws, killing him.

Pet Shop appears as one of the final enemies, though the player's whole party must fight him, unlike in the manga where only Iggy ever encounters him.

Pet Shop appears as a playable character and was only available in the second version of the game.

All of Pet Shop's moves are based on his ability to create ice, such as throwing Ice Stakes, trapping the enemy on the ground with ice or anything related to icicle attacks. His first special move shoots several ice stakes with great speed as a projectile attack. His second special move creates a giant ice block that comes from above the screen (the same move he used to kill the agent in front of DIO's mansion). His last special move sends Pet Shop to the back of the screen from where he shoots even more ice stakes at the opponent. This, however, only works as a grab special move.

Pet Shop is widely considered the most powerful character in the game, with incredibly strong special control from his many projectiles and unblockable setups stemming from his overhanging icicle attack. Playing Pet Shop is generally considered "poor taste" and he's typically soft-banned in most Tournament settings.

If hit by Alessi's Stand attack, Pet Shop turns into an egg but still can use his Stand to make small icicles, possibly implying that Pet Shop was born with his Stand ability.

His ending on Arcade Mode portrays a hypothetical situation in which Pet Shop manages to kill all the main heroes. Pet Shop continues to act as the guardian of DIO's Mansion, as the text says "And Pet Shop never allowed anyone to come near the Mansion, anyone...".

Pet Shop was confirmed for the game alongside Lisa Lisa. So far, he is also the only playable character in the game who does not possess a voice actor, receiving his voice from various hawk sound effects instead, and relying on the narrator for spoken portions, similar to Baoh in All Star Battle.

Pet Shop has a unique form of movement: flight. While flying, he has high mobility and can ascend. He can "sidestep" and dash as well, and has access to all his skills. His Normal and Powerful attacks will send ice shards at the opponent with some homing capability, and the Powerful attack can be charged to increase the number of shards fired at once. However, his stamina will slowly deplete, and the depletion rate increases when actively ascending. When his stamina empties, or he idly hovers close to the ground, Pet Shop will land.

While on the ground, Pet Shop cannot move, loses access to most skills, and what Normal attack he has takes the form of meek ice shards forming around him to hurt opponents in range. However, he is now capable of guarding. Of note is that Pet Shop's stamina regeneration is slower than average, granting opponents a larger opening of attack before he can take flight again.

As a Stand User, Pet Shop is one of many characters with wildly varied abilities that grant him uniqueness in battle.

Along with the other characters from Parts 1 through 3, Pet Shop's main color scheme is based on his anime appearance.

He is paired with Kars in the Eyes of Heaven Tournament. In the preliminaries, they defeat Pannacotta Fugo and Noriaki Kakyoin in the first round, and Dio Brando and Joseph Joestar in the second. In the semi-finals, they defeated Jotaro Kujo and Kakyoin in the first round, and Jotaro and DIO in the second. Ultimately, the team wins the Tournament, defeating Jolyne and Gyro Zeppeli in the final round. 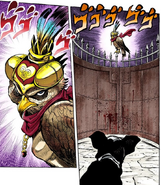 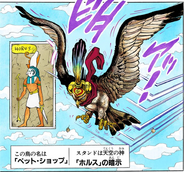 Pet Shop's portrait from Heritage for the Future

Pet Shop in Heritage for the Future 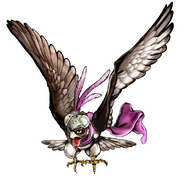 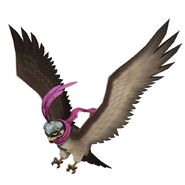