Pitter Patter Pop (ピタパタポップ, Pita Pata Poppu) is a mobile puzzle game released in Fall 2018. The game was teased with the announcement of the JoJo's Bizarre Adventure: Golden Wind anime.[1]

A teaser app called "JoJo's Pitter-Patter Pop! Chiramise" released on August 27, 2018. The teaser app allows users to take photos with the SD characters appearing in different poses, though the full game is much different.[2]

The top of the screen shows two characters the player controls (such as Josuke and Okuyasu) who face off against a boss character (e.g. Akira Otoishi) with a health bar. The rest of the screen displays a 6x6 grid consisting of icons of many different characters. Players will have to match the pieces to make the icons flip over and disappear, which increases their score and decreases the health of the boss. Matching over 6 tiles will create a box of that tile, which can be moved just like other tiles and clicked on to open, creating 5 tiles in a cross shape. There are different effects and animations that appear depending on the character that was matched. The battle ends when the boss is defeated or time runs out.

Below both of the player characters have skill meters in the form of three stars. Once the a character's skill meter is full, their skill can be activated by tapping the character. All characters possess unique skills falling into one of four categories. "Change" (変化, Henka) skills replace tiles with others, usually of those of the character activating it. "Enhance" (強化, Kyōka) skills charge tiles so that getting rid of them will do more damage and earn more points. "Erase"(消去,Shōkyo) skills remove tiles without needing to match them. "?" skills are skills that do not fall into any of the previous categories, such as rearranging tiles. Skills can be activated during Stand-up Time.

There are many different types of panels depending on the battle and character. Some bosses will create intrusion panels and hole panels. Intrusion panels do not fall like other tiles, blocking potential matches and wasting space. These panels can be destroyed by opening boxes adjacent to them or using certain character skills. Hole panels function similarly to intrusion panels but cannot be destroyed.

If time runs out or boss is defeated and a character has full meter, all tiles of that character will disappear, adding points and damaging the boss if they have any health left. Any boxes left untapped will open, also adding points and dealing damage if a match is created. If the boss is defeated within a given amount of time, "Rush Time" activates, and the player can repeatedly strike the boss by quickly matching icons to rack up their score.

Players have their own JoJo mansion with several rooms that they can decorate with collectible items and props. The characters residing in each room can also be chosen, and they will interact with each other.

Four types of in game currency exist, coins, diamonds, furniture points, and furniture tickets. These currencies can earned by completing missions for levels, and quests. Coins and furniture points can also be earned by playing through levels themselves. Diamonds can be used to obtain characters from ongoing gacha banners. Characters are categorized into three types of rarity, Gold, Silver and Bronze, with Gold being the rarest and Bronze being the least. Obtaining duplicate characters will help progress that character's skill level. Leveling up a character's skill will upgrade that characters skill, with a maximum level of 5. Characters themselves have a maximum level of 50 and can be leveled up by gaining exp by playing through levels. Every 5 levels, coins will be required to unlock that character's level limit so they can continue to earn exp. Skill Tickets and Level Tickets can also be obtained to earn points towards their skill or level. The player's level determines the amount of rooms available within the mansion. The player can earn points to level up by purchasing furniture or clicking on apartment events. Furniture can be purchased with furniture points and furniture tickets.

Characters differ in rarity: Gold (GR), Silver (SR), and Bronze (BR). There are currently 83 playable units in the game. The units displayed with a ☆ in the tables below are limited whereas 🎤 means they are voiced.

Characters with the same name but are different units cannot be used in the same team or put in the same room together. 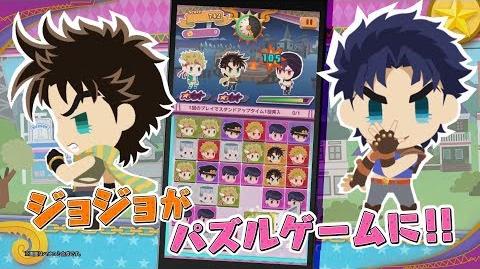 Retrieved from "https://jojo.fandom.com/wiki/Pitter_Patter_Pop?oldid=339224"
Community content is available under CC-BY-SA unless otherwise noted.