Originally mind-controlled and used as bait by Dio Brando, he joins the Joestar Group on their quest, in order to save his sister.

Poco is a young British boy of understandably short stature. He has short wavy hair and freckles. Poco wears a light shirt and overalls, but goes barefoot.

Poco is introduced as a mischievous and cowardly boy who steals the group's supplies. Later, however, especially when Jonathan is losing against Tarkus, Poco was shown to be brave, willing to risk his life to help the group. He also worries about his sister, who has been taken captive by Dio.

Poco was a cowardly boy who got bullied by other kids, but was protected by his sister. When confronted by her about when he was going to fight back and not depend on her anymore, Poco answered that he would do this "tomorrow", which causes her to slap him. When Dio took shelter in Windknights, he brainwashed Poco to lure Jonathan into a trap.

On their way to Dio's castle, Jonathan's group encounters Poco, who is introduced as a pickpocket who steals the group's supplies. In reality, he was under Dio's mind control, and while he is able to get away from the group quickly, Poco quickly finds himself in danger from Dio's zombies. Luckily, he is saved by Jonathan, and witnesses the serious situation of the group.

When Jonathan fights a losing battle against Tarkus, Poco finally shows his courage, willing to risk his life to open the door to allow Zeppeli and Speedwagon to come to Jonathan's aid. He then accompanies the group to the battle against Dio so he can save his sister, and is protected by Straizo from Page, Jones, Plant and Bornnam for the remainder of the fight. After the battle's end, he last appears with his sister and the other characters on the port to wish Jonathan and Erina a good honeymoon.

Poco is unplayable, but appears generally as in the original story. He first appears stealing from the group and later becomes an ally, shown as well is his turmoil with his family and struggle during the final fight. 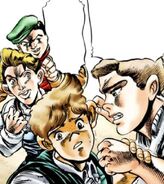 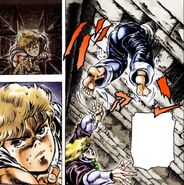 Climbing the wall into the arena where Jonathan is battling Tarkus

Climbing in the arena