Chapter 33 - Pluck for Tomorrow and the Successor, Part 1 (Appears in flashback(s))
Chapter 37 - The Three from a Faraway Land, Part 2

Poco's sister is a young British girl with long dark hair, which she ties into either ponytails or braids. She has a beautiful face, making Dio take an interest in her.

Otherwise, Poco's sister wears rather plain clothes, a dress, jacket, and coat, as a member of the working class of 19th Century England.

Poco's sister is a particularly fierce and righteous girl. She would often stand up to Poco's bullies, frightening them away. At one point, she chides and slaps Poco because of his weakness, encouraging him to become less cowardly. Even in front of the terrifying Vampire Dio Brando, she refuses his temptations for immortality and slaps him.

She nonetheless also shows a caring side, as while she reprimanded Poco, she also takes care of him after his beatings and risks venturing into the night to look for him.

She first appears in Poco's flashback from when he was bullied by the other boys, who run at the sight of her. She then asks Poco when he will stop being a coward and start fighting back. Upon hearing him answer with "tomorrow", she replies with a slap for his cowardly behavior and takes him back home.

After Poco meets the heroes, they take him home, only to learn from his father that his sister left in the night to search for him. It would turn out that Poco's sister was held captive in the castle by Dio, the vampire noting her age and killing one of his zombie pets for making a lewd comment. Dio proceeds to seduce her into joining his legion of the undead willingly, offering her eternal life and beauty. But the girl slaps him, calling him a monster pretending to be a man.

Dio remains composed and takes his leave, telling the girl that perhaps she prefers the company of his zombie minion Doobie, instead. Just before the monster could kill her, Jonathan appears and saves her. During Jonathan's battle with Dio, she and her brother are protected by Straizo from Page, Jones, Plant, and Bornnam as he and the others eliminate Dio's zombies. After the battle's end, her last appearance is with her brother and the other characters on the port as they wish Jonathan and Erina a good honeymoon.

Much like the original storyline, her appearance in the game is limited to small roles in cutscenes before and after some battles.

In the manga, afraid of Dio 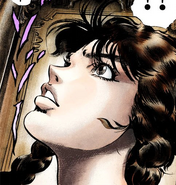 Appearing in a flashback going back home with Poco

Poco's Sister as depicted in the Anime

Slapping Dio in the game