Chapter 448 - Meet the Gangster Behind the Wall, Part 1

Polpo (ポルポ, Porupo) is a minor yet influential character and antagonist featured in Vento Aureo.

Polpo is the first of Passione's capoW that Giorno Giovanna encounters and is responsible for recruiting new members in his division. He then tasks Giorno to keep a lighter lit for 24 hours as a test. Polpo is a Stand User and his Black Sabbath automatically attacks Giorno during said test.

Polpo is a massive and morbidly obese man easily towering over regular people, having an exaggeratedly large head proportional to the rest of his body. His most recognizable features are his black eyes with bright pupils and pointy nose.

Polpo wears a cap with multiple mushroom-shaped protrusions, a bracelet on his right wrist and a two-layered tunic laced at the bottom. The anime adaptation replaces the lacing with a motif repeating the crest symbol found on each side of his chest.

Polpo makes an appearance in the one-shot with a changed appearance. He is now one head shorter than average.

Polpo wears a bright blue jacket and dotted white shirt and brown trousers. His hat is portrayed as green.

Polpo acts like a stereotypical Mafia don, showing an affable side and an appreciation for various works of art, quoting philosophers and gastronomy. His table manners are, however, lacking, showing that his sophistication is superficial.[1]

On the surface, Polpo places great emphasis on one's trustworthiness and says that it is the most important characteristic of a good gangster[2]. In reality, he only thinks of his subordinates as pawns and is revealed to be thinking about how to exploit Giorno once the lighter was returned. Likewise, he preaches that giving due respect is paramount and argues that even God wouldn't object to murdering someone for not showing proper respect, linking it to his ideal of trustworthiness.[3] Fittingly, some of Polpo's fellow Passione members respected him for his loyalty, one dismissing the idea of Polpo betraying the family as soon as his colleague suggested it.

He shows a very keen sense of awareness, deducing Giorno's injury from the marks on his hands and even how Bruno Bucciarati "told him" that Giorno wanted to join, despite not meeting him prior and Giorno proclaiming his initiation moments before meeting him.[1] However, Polpo admits (both to Giorno and himself) that he tends to become somewhat absent-minded when snacking, claiming all the blood runs to his stomach.

Polpo's Black Sabbath is a long-range automated Stand that can travel in an object's shadows. Polpo mainly uses his Stand in testing new recruits who are worthy of joining Passione as Stand Users by injecting them with an Arrow.

Illusionism: Polpo shows a talent for illusionism, hiding in his room despite his size and seemingly eating his fingers to suddenly pull out a lighter from his hand.

Little is known about Polpo's past. It is known that he was at one point recruited into Passione and then became a capo, considered rather trustworthy within the organization and responsible for handling matters related to Stands.

After becoming capo, he then was imprisoned for an undisclosed crime but his influence was such that he turned his cell into a relatively luxurious room. He then kept overseeing his territory from the safety of his cell and also became responsible for recruiting people into the gang and turning them into Stand Users. It is known that he was Bucciarati's superior and that Narancia passed Polpo's test.

Polpo is first seen serving fifteen years in prison when Giorno Giovanna approaches and tells him that he wants to join Passione. Being in the high ranking position of capo in Passione, his job is giving orders, from the Boss to other subordinates, as well as testing new recruits who want to join the gang. Polpo's means of initiation into Passione is keeping a flame lit for 24 hours; with that, he gives Giorno the lighter.

Polpo unwittingly shoots himself in the mouth with a gun which Giorno had disguised as a banana. This was an act of vengeance for having his Stand, Black Sabbath, carelessly cause the death of an innocent old man. This also destroys the Arrow in his Stand's mouth. As Polpo dies, Giorno, far removed from the scene, tells him to "savor [his] last meal". After Polpo has deceased, his fortune is rumored in Passione. leading Bucciarati's team to be attacked in expectations that he knows where Polpo's fortune is by Mario Zucchero and Sale, once the group obtains the fortune, Bucciarati buys his way to Capo by giving the money to Pericolo. After being made Capo, Bucciarati is assigned with what was meant to be Polpo's last task, the task being to safely bring Trish Una to the boss.

Polpo makes his game debut in the PS2 title. He only appears in the two cutscenes involving his introduction and suicide at the hands of Giorno. Black Sabbath, however, is faced in Chapter 3.

Polpo revealing hidden possessions despite being in prison 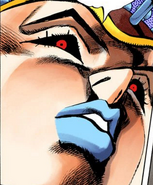 A Close-up of Polpo's face

Polpo seemingly eats his own fingers

Polpo with his own special lighter 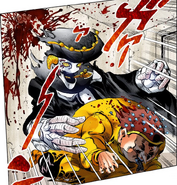 Polpo seemingly chews off his own fingers

Polpo accidentally kills himself with his own gun

Polpo in Uragirimono no Requiem 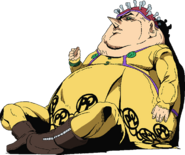 A tribute image of Polpo, drawn by Yoshihiro Togashi for 25 Years With JoJo