Purple Haze is a humanoid Stand of height and builds similar to Fugo's. Its face and body are patterned by horizontal lozenges of alternating shade, and armor pieces are present on its shoulders, elbows, and knees. It has spikes along its back. Its lips and appendages are loosely stitched, and its eyes have distinct irides with miotic pupils. On its head is a helmet inspired by RomanW design[1] with a clear transparent visor in the approximate shape of a beak.

In the anime adaptation, Purple Haze's design is slightly changed, with the Stand receiving a long, flowing cape with a purple transparent visor. It is surrounded by a purple mist in most of its appearances.

Befitting its name, all media featuring Purple Haze portray it as a checkered purple and white Stand.

Purple Haze is a Stand with an overall unstable personality much like his user's, it also seems to have a separate consciousness. It usually behaves with barely restrained violence in its actions and is prone to incomprehensible mumblings and roars of rage in equal measure. However, Fugo can still control it. Despite its tendency to drool uncontrollably, it is also a "neat freak" and will obsessively clean the very drool off itself until it bruises its own arm. It is stated that its temper, cleanliness, and viral ability and desire to "clean" everything is similar to Fugo's own personality.[2]

In battle when punching its opponents, Purple Haze shouts, "Ubashaaaa!!!"[2]

Purple Haze is an unstable Stand that contains a particularly deadly, flesh-eating virus in each of the three bulbs on each of its hands.[2] When a bulb breaks, usually because Purple Haze punches something, the virus is released and surrounds the Stand as a cloud of purple gas. In the case where Purple Haze is unable to shatter the bulbs through direct contact, it can release them from its knuckle like a pressurized gun so that they can shatter on impact.[4]

Any living thing that enters the range of the virus is immediately infected. The virus rapidly multiplies within the victims body, overrides their metabolic functions and makes them rot from the inside.[2] An adult human being will melt into organic goo within 30 seconds at best. Fortunately, the virus, despite its deadly nature, is very fragile and dies quickly when exposed to the elements, such as sunlight. Even indoor light is enough to kill the virus quickly. Thus, the range of the virus is very short.[2]

Because the virus indiscriminately attacks friends and foes alike,[2] it makes Purple Haze a very dangerous Stand for Fugo's allies. Even its user isn't immune from the effects of the virus.[5] For this reason, Purple Haze is considered an absolute last resort.

Despite the deadly nature of the virus, an organism with the right antibodies can survive Purple Haze. When Giorno creates a snake from a brick that was inside the range of the virus, the virus was part of the snake's natural habitat, and thus it naturally created antibodies to survive. This allows Giorno to use these same antibodies to make a vaccine and save himself from being devoured.[4] 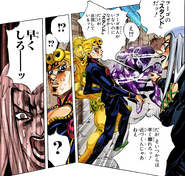 Abbacchio warns Giorno to stay away from Purple Haze

Purple Haze lets out its signature cry and destroys a wall 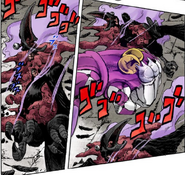 Purple Haze is described as a representation of Fugo's violent side

Purple Haze smashing the mirror Fugo is trapped in 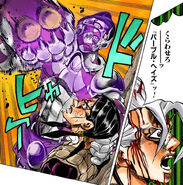 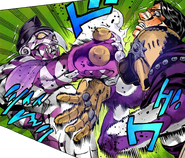 Purple Haze's punch deflected by Man in the Mirror 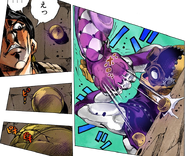 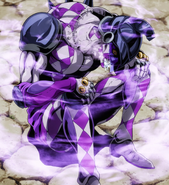 Summond by its user, outside of the Mirror World

Purple Haze alongside its user

One of the Stand's quirks - its compulsion to keep itself clean

Purple Haze punching through a boulder

Purple Haze & Fugo in the ending credits for Part 5

A carving of Purple Haze in Modern Crusaders 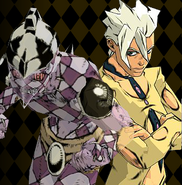 Fugo in the background of Purple Haze, Vento Aureo

Purple Haze in All Star Battle

Fugo and Purple Haze in the 7th PV of ASB

One of Fugo's taunts, alongside Purple Haze in ASB

Purple Haze in Eyes of Heaven

Purple Haze during Fugo and Narancia's DHA, Eyes of Heaven 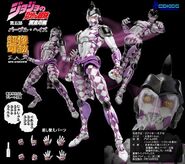