Red Hot Chili Pepper resembles a Kappa (Creature of Japanese folk-lore) with a beak and a lizard-like tail. Its head bears a resemblance to a PachycephalosaurusW. Its body is covered in a radiant electrical glow that slowly diminishes the longer the Stand is in use without electricity. Its design is a combination of the strong head-butting dinosaurs from Kyouryuu Daikikou and Frieza from Dragon Ball Z.[2]

It possesses a codpiece of varying length which is given a consistently less prominent appearance in the anime adaptation.

After Otoishi's fight with Josuke & Crazy Diamond, Red Hot Chili Pepper was thrown into the ocean, dispersing its electrical power as well as its body. The Stand itself was effectively broken, with a dismembered look, as most of its body was left in the ocean.[3]

In order to hide his identity, Otoishi speaks and is able to express various emotions through his Stand and its facial features (giving the strong impression that the Stand is responsible).

Red Hot Chili Pepper is a long range Stand based on electricity whose dangerousness increases dramatically when it is near electricity. Not only does its range and ability to pass through electrical systems make Otoishi impossible to find, when powered-up, it can physically overwhelm and outpace Crazy Diamond.[4][5] On the other hand, it is very dependent on its power source to act.

Red Hot Chili Pepper is capable of absorbing electricity to increase its raw strength and speed[6] and heal its wounds.[7] It is shown that it can absorb the full power of Morioh's electrical grid.[5]

Upon depleting the electricity it has absorbed, it will weaken and take upon a rusted look instead of its shiny gold coat and slowly begins to vanish, threatening Otoishi's life.[7][8] This also occurs if the Stand touches water.

Red Hot Chili Pepper can persist inside and pass through flows of electricity, and thus is able to hide inside power wires[9] or batteries[10] and quickly travel from one position to another through electrical cables. If Red Hot Chili Pepper holds on to an object, it can turn it into electricity and move it where it desires[9] and if this move is used on a living person, they are also dragged inside the electrical system, electrocuted, and eventually killed, as was the case with Keicho Nijimura.[9] Otoishi uses this ability to steal about 5 billion yen worth of goods throughout Morioh,[11] but also spy on his enemies.[6]

Red Hot Chilli Pepper appears without its Stand user, Otoishi, as one of the ten characters representing JoJo's Bizarre Adventure in the game.

Red Hot Chili Pepper appears once again in Eyes of Heaven with Otoishi. If it comes in contact with any live electrical appliance, such as the electric chair in the Boing-Boing Cape stage, instead of taking damage, Chili Pepper will automatically charge Otoishi's Electric Gauge by two-thirds of a meter.

Attacking Okuyasu from behind, planning to steal the Bow and Arrow 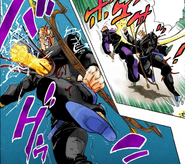 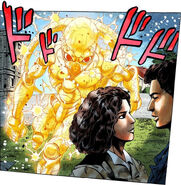 RHCP inside of Josuke's television 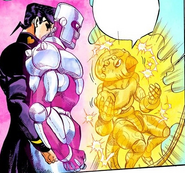 RHCP 'offers' Josuke a free hit, confident in its ability to dodge

The Stand regrets its decision 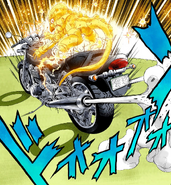 The Stand reappears, having hidden in Okuyasu's motorcycle battery

RHCP threatens to kill Joseph Joestar upon his arrival in Morioh 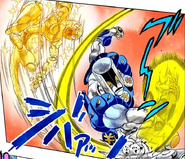 Dodging an attack by Okuyasu's The Hand 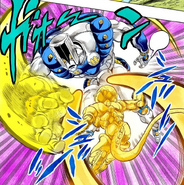 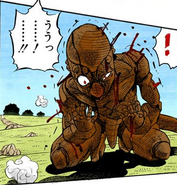 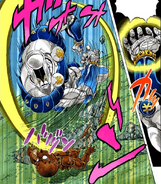 Powering up and ready to kill Okuyasu

RHCP attacks The Hand with just its little finger 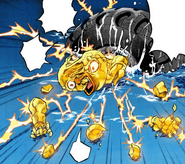 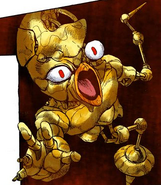 RHCP broken up after dispersing

Taking the Bow and Arrow.

Spying on Josuke, Koichi and Jotaro.

Red Hot Chili Pepper inside of the television.

Getting punched by Crazy Diamond.

RHCP with a rusted appearance.

RHCP alongside its master, Akira Otoishi.

RHCP broken up after dispersing 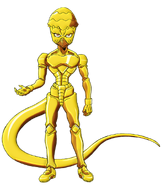 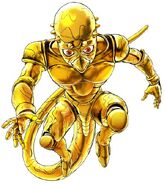 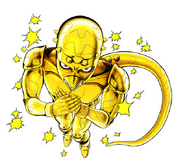 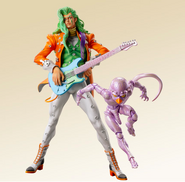