Stabbed to death in the back by Yoshikage Kira

Reimi was Yoshikage Kira's third victim in his life as a serial killer. As a Ghost, she haunts a hidden street of Morioh in the hopes of meeting someone willing to help her bring Kira to justice. Having saved an infant Rohan Kishibe from Kira, Rohan takes it upon himself to close this case by finding the killer.

Reimi is an extremely gorgeous 16-year-old girl of average height and a petite body. She has youthful features and large, piercing violet-pink eyes (blue in the manga). She has chin-length light-colored hair, kept back with an alice bandW. Having slightly dark hair in the manga, Reimi is portrayed as being brown haired in the colored version and pink-haired in the anime adaptation.

She wears a chokerW and a short sleeveless dress with bows at the front. Bands at her upper arms taper into a criss-cross at the top of her forearms. She wears platform sandalsW and pale nail polish.[1] Her outfit is generally portrayed as pink.

A ghost, she has massive, perpetually fresh knife wounds on her back, as a remnant of her murder (not shown to the reader, with the impression that they are too horrific).

Heaven's Door reveals that Reimi's BWH measurementsW are 82-57-84; and that there is a mole on her left breast.

Reimi is friendly, playful, joyful, and empathetic. She is firm in a self-imposed responsibility to stay in Morioh as a ghost until her killer is brought to justice. She is normally alone with her dog Arnold, invisible to all without Stands. She feels lonely during her years as a ghost and is assumed to have been a social butterfly during her life.

She playfully tells Rohan Kishibe his "pockyW horoscope"; upon which Rohan tells her based on the color of her nail polish (perhaps in an expression of cold readingW) that she is "afraid of love"; liable to back out of relationships at the "critical stage", to which she responds with innocent concern.

She cares deeply for Rohan's wellbeing despite his unfriendly attitude towards her. She is generally very protective of him, which may be due to her role as his babysitter while she was alive.

She weeps hurtfully when she begs Rohan and Koichi for their help in finding her killer. Her concern extends further to everyone in Morioh targeted by Kira; and she is evidently saddened when she sees Shigekiyo Yangu's spirit in transition.

Reimi is also sensitive in her empathy for Kira's victims, as despite seeing hundreds of victims murdered by Kira's Stand over the years, she never became de-sensitized to their deaths and expressed the same grief for every victim.

Reimi understandably demonstrates vengeful anger towards her murderer, and stated that she had prepared carefully for his eventual demise, setting Arnorld in an ambush position to condemn him into being taken away by the spirits of Ghost Girl's Alley.

Reimi survives as a Ghost, generally restricted to Ghost Girl's Alley in Morioh and the surrounding area. It is unclear if she can see Stands before becoming a ghost, otherwise she would be the only Non-Stand user capable of seeing Stands.

Reimi Sugimoto was the neighbor of Rohan Kishibe when he was 4 years old. One night she attended as his babysitter while his parents had an important thing to attend to, and that night the murderer Yoshikage Kira entered the house to kill her. Woken up by a dripping sound, she found Arnold's corpse and realized her parents were killed, so Reimi saved Rohan by letting him escape by the window while she received a gruesome wound in the back and died. Living as a ghost bounded to a ghost alley serving as a passage to the afterlife, Reimi and her deceased dog Arnold awaited the day they could find someone who could hear their story and report the murderer to the police before more teenage girls are killed.

Reimi finally finds someone with a supernatural ability who can see her: Koichi Hirose and Rohan. Even though Rohan doesn't remember her, Reimi tells her story and asks them to report Kira to the police. Refusing at first, Rohan agrees to help after knowing the killer is still alive and warns the Stand users of Morioh about him. Reimi then remains in the ghostly alley, at one point seeing Shigekiyo Yangu's soul go to heaven after his death by Kira.

After Kira's death, his soul is transported to Ghost Girl's Alley, Reimi tries to trick him into looking back and be dragged to the afterlife. Although Kira guesses her trick because he knows of the alley, Arnold is the one who forces him to look back and be dragged by hundreds of hands. Finally in peace, Reimi ascends to Heaven along with Arnold after a heartfelt goodbye to the Stand users of Morioh.

In the live-action film, Reimi was a source of encouragement for Ryohei Higashikata. She was always cheerful and greeted him. Ryohei was devastated after the mysterious murders of her and her parents, Takashi and Kazuko Sugimoto. He kept a sketchbook with cutouts from a newspaper detailing their deaths and how no clues had been found. Frustrated that he couldn't even protect Reimi, Ryohei smashed his watch he got as an award for his 20th year of service, thinking that he's a failure as a policeman. He made it his goal to catch her murderer with his own hands and desperately wanted to protect Morioh.

In the spin-off novel "JORGE JOESTAR", villain Pucci resets the universe a total of 36 times, creating 36 different universe iterations. Because of this, it appears Reimi was among the souls regenerated and in the universe seen in the Jorge Joestar manga, Reimi is alive and is a Stand. Despite this, she also has a Stand, Arrow Cross House (, Arō Kurosu Hausu), which functions as a time-traveling tesseract. As every iteration of the universe behaves differently, but certain elements of "fate" are retained, it is likely in other universes she remains with Rohan and the Part 4 characters in other arrangements.

Reimi guides the player through the Story Mode menu. She also appears on the Morioh stage, as part of the Situation Finish. When the defeated character lands in the Ghost Girl's Alley, she tells them that it is time for their judgement. However she appears only as a still photograph in her manga form. 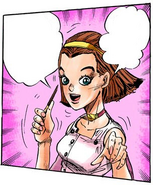 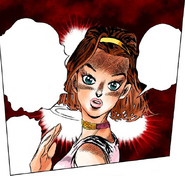 Young Reimi shortly before her murder.

Reimi, alongside Arnold, reveal themselves as ghosts.

Showing Rohan and Koichi her scars.

Reimi pleads Rohan to find her killer and bring him to justice.

Reimi and the other warriors of Morioh. 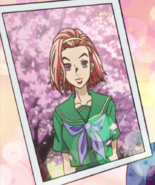 Reimi cries out to Rohan's ghost.

Reimi being threatened by Kira.

Revealing to Kira that he is, in fact, a ghost.

Reimi being saved from Kira by Arnold.

Reimi condemns Kira to whatever hellish fate awaits him. 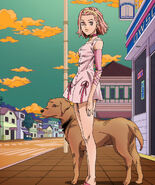 Reimi tears up as she says her goodbyes.

Reimi (with other deceased Morioh citizens) featured in the third opening, Great Days. 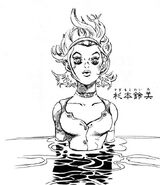