JJL Chapter 22 - Morioh Town: Year 1901
Rina Higashikata (東方 理那, Higashikata Rina) is a minor character briefly shown in Steel Ball Run and introduced in JoJolion. She is the wife of Johnny Joestar and daughter to Norisuke Higashikata I.

Rina was a young Japanese woman with a square face, typically seen in a yukata. She first had a traditional hairstyle, but is later shown with a ponytail.

Rina is described as a loving and caring wife. She is also seen as faithful during her peculiar ailment as she trusted Johnny to save her. While she was cured by the corpse parts, she showed great concern for her son George II, as it is revealed that he contracted the disease as well.

After the events of Steel Ball Run, she meets Johnny Joestar on the ship crossing the Atlantic back to America with her father Norisuke. The two fell in love and eventually marry and live together on a ranch. Years later, Rina comes down with an incurable illness causing her to lose her memories and eventually turning her skin stiff and folded like origami. Johnny decides it is best to bring her to Japan to spend the last few days of her life in her hometown of Morioh. He eventually travels back to New York to re-obtain the Saint's Corpse as a way of curing his wife's illness. After she is cured, the disease passes to their son George II. Johnny finally uses Tusk to take it upon himself, sacrificing himself for the sake for his family. Afterwards, she is charged with Johnny's murder, but is released due to lack of evidence. 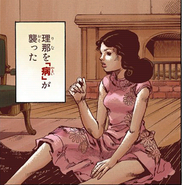 Rina on a ranch wearing a casual dress, with loose hair.