Risotto Nero is the leader of La Squadra Esecuzioni and sends his squad-mates to battle Team Bucciarati; all in order to kidnap the Boss' daughter Trish Una, as part of their plans to discover her father's true identity. After all of his squad-mates fall in the course of their mission, Risotto pursues Team Bucciarati himself to the island of Sardinia. However, there he becomes wound up in a confrontation with Vinegar Doppio on a beach in Costa Smeralda.

Risotto is a Stand User and uses the dangerous magnetic abilities of Metallica present within his own blood to manipulate the metals in his surroundings.

Risotto Nero is a 28-year-old man of above average height and possess a muscular build.

He wears a black, hood-like headpiece from which hang several small, metallic baubles, bearing letters that make up his name. This piece hides his hair; though his light bangs (originally dark) almost reach his eyebrows. Light-eyed, his sclera are completely black.

Bare-chested, he wears a long, black, lapelless coat with straps crossing his chest in an X; and pants in thick horizontal stripes of black and white.

When first revealed in a photo, Risotto did not have his hood (or it did not frame his face closely enough) and wore dark lipstick.

Risotto is a serious individual, as befitting of the leader of La Squadra Esecuzioni. Always focused on his goal and carefully approaching Doppio whom he suspected to be Diavolo's underling, Risotto is methodical in his assassination method, making decisive actions and calmly analyzing Doppio's moves before acting. His ability to predict his opponent's moves is formidable, and has allowed him to almost kill Doppio were he not outsmarted by the Boss.

Behind his cold and calm approach to things, Risotto is prone to outbursts of violence, threatening Doppio when he takes too long to obey his command. When suffering setbacks, Risotto keeps his cool and decides the best course of action.

A perceptive man, Risotto could see Doppio turn his eye to the sound of Aerosmith's engine and deduce that he was a Stand user.

Risotto shows that he cares deeply about his men, vowing to avenge them when he first appears. In the TV anime, he is shown calming a dispute between Formaggio and Illuso. He is also the first to notice and question Sorbet and Gelato's absence (even before talking about their payment), and stayed the longest during their funeral.

Risotto's Stand, Metallica, comprises a mass of minuscule beings residing in his bloodstream, enabling him to manipulate iron through magnetism at a short-range.

Tactical Intelligence: Risotto is a gifted tactician, showing a grasp of Stand fights rarely witnessed in the series. Risotto could find multiple applications for his Stand Metallica, as well as deduce critical facts from observations such as Doppio's status as a Stand user. In a fight, Risotto keeps tabs on the enemy's abilities and moves, deducing their next moves with precision and making them work against them. His methodical approach of assassinations and the tendency to quickly kill his targets before they could act nearly killed Doppio multiple times despite his ability to predict the future.

Risotto Nero was born in Sicily in 1974. When he was 14 years old, his cousin was killed by a drunk driver. Though the driver was punished by the law, being sentenced to several years in prison, Risotto did not forgive him. Four years later, at the age of 18, he assassinated the driver and began his life in the underworld shortly after. He obtained his stand Metallica at the age of 21 and worked with his team to kill politicians, gangsters or anyone else who was a threat to Passione. He was the leader of La Squadra Esecuzioni which were only called upon when their services were required. The Boss didn't allow them their own turf, causing Risotto to grow dissatisfied. Two members of his team, Sorbet and Gelato began to investigate the Boss' identity and were shortly executed after as a punishment and a warning from the Boss. From then on, the team was kept on a tight leash and were given the cold shoulder. They stopped trying to find out the Boss' identity until they learned about his daughter, Trish Una.[1]

Risotto is introduced as the leader of Passione's rogue Assassination Team. Two days before Bucciarati is given custody of Trish, Risotto and his team investigates Trish's room and discovers a photo of Donatella taken in Sardinia. Upon hearing of the plane crash off the coast of said island, Risotto surmises that Trish would be returning to the house where the photo was taken and camps there himself.

On a cliffside near the house, Risotto observes Vinegar Doppio from afar before approaching and immobilizing him. Risotto notices the young man trying to hide an envelope and demands he shows him the contents, but finds it to be empty (not realizing that Doppio managed to hide the picture of Donatella beneath his shoe).

Though Risotto is convinced that Doppio's fear and cowardice are genuine, he notices that the boy reacted to the sound of Narancia Ghirga's Aerosmith patrolling the area, and figures out that he's a Stand User. Risotto becomes restless knowing that Bucciarati, his gang, and Trish are nearby. Doppio attacks Risotto, but Risotto has Metallica form blades in his mouth. Risotto figures out that whatever Stand Doppio has must be a close-ranged Power-type when the young man attacks by running at him. With this knowledge in mind, he keeps himself from getting within 2–3 meters. Risotto drops off a rock and activates his invisibility to hide from Doppio, before causing needles to spew from his mouth. The assassin reappears, having readied scissors in Doppio's neck to slit his throat, but he manages to pull them out himself, leaving Risotto wondering about Doppio's ability. Disappearing again, he sneaks around Doppio when the latter suddenly throws scissors that sever Risotto's leg, having figured out Metallica's ability. Risotto responds by creating multiple knives from the iron in the sand and sending them at Doppio, and while the young man deflects most of them, few are able to strike him. Risotto reattaches his foot using Metallica and continues to fight.

Risotto decidedly leaves his severed foot in order to fool Doppio into throwing knives in the wrong direction when he tries to figure out Risotto's location using magnetism. Doppio's strange behavior and ability to forecast the future to know Risotto's next move leads the assassin to ponder what his true identity is. When Metallica begins creating razors in Doppio's head, Risotto figures out that Doppio is actually the Boss and not just his most trusted subordinate. He grows ecstatic and orders the razors to explode Doppio's head. When Risotto is suddenly shot by Aerosmith. The Boss emerges and reveals that the knives thrown were in the direction of Bucciarati's group, causing Aerosmith to attack whoever was in the direction of the thrower. As Doppio has lost a lot of blood and is heavy on breath, Risotto, the larger blip on Narancia's radar, was targeted. More bullets rip through Risotto, leaving him in a near-death state. He is left lying in defeat, and as the Boss stands over him, he tries to get a look at his face, only for the brightness of the sun to obscure it. The Boss offers him a quick and honorable death in exchange for him restoring his iron levels to normal. However, as a last resort, Risotto uses Metallica, caught on Aerosmith when his skin was sent flying from the first volley of bullets, to guide the Stand and shoot the Boss. However, King Crimson erases half a second to avoid the bullets, and Risotto ends up getting shot himself, bringing an end to the assassin.

Risotto is the only antagonist from Part 5 who doesn't appear in the game as an enemy in Super Story or any Story Drama, presumably because he did not actually fight any of the protagonists in the original narrative. However, his character model can be seen in the Gallery Mode. And the only semblance of the fight with Vinegar Doppio was partially recreated in an Audio Drama, on Track 56, of the GioGio's Bizarre Adventure OST

Despite not making an actual appearance himself, his Stand, Metallica, can be seen during the loading screen.

Risotto is introduced by Diavolo in a photograph 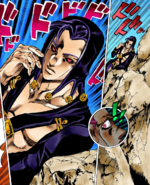 Risotto figures out that Doppio is a Stand User

Risotto using Metallica to blend with his environment 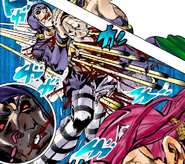 Shot by Aerosmith, sealing his defeat 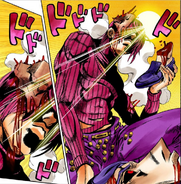 Risotto is shot and killed himself

Risotto, Melone and Ghiaccio receive a call from Formaggio

Risotto and Illuso shocked in front of Sorbet's corpse

Risotto in Napoli's train station next to a corpse

Risotto picks up a piece of paper

Answering a phone call from Melone

Answering a phone call from Ghiaccio

Risotto watches with a cold, unflinching glare as the eye of the secret agent of Passione is decimated by his Stand

Making a phone call to Ghiaccio

Risotto is watching for Doppio

Risotto screaming to Doppio to stand up

Risotto figures out that Doppio is a Stand user

Risotto using Metallica to blend with the environment

Nero attempts to take The Boss with him.

A close up of Rissoto's face 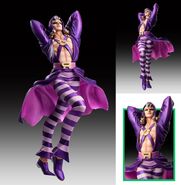 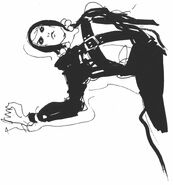 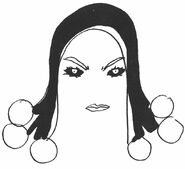