For the most part, Rolling Stones usually takes on the appearance of a normal rock. Its appearance will change to look similar to its victim, and afterward, will appear near said victim either in the form of a ball with the character 凶 (Kyō, meaning "ominous", "misfortune", or "bad luck") on it or as a curled-up stone sculpture.

It is visible to ordinary humans, as an eyewitness reported seeing a woman holding it as she jumped down a building to her death.[2]

In the colored manga, Rolling Stones is colored black. In the anime, its color is stone grey.

Rolling Stones is an automatic Stand, as Scolippi can neither control nor stop it. Although it is not malevolent as it shows a target their fated death, the dubious mercy of instantly euthanizing them still makes it very dangerous.

Rolling Stones spots a target fated to die soon and then begins to automatically stalk it.[2] Rolling Stones follows a chosen person whose death is close, appearing and disappearing[3] or even moving by itself[4] until it touches the target. In truth, it can enter the ground and walls to move unnoticed.[4]

As it follows the target, Rolling Stones gradually breaks down until the form of the target appears on it.[3] More precisely, it shows a presentation of the target dying, exposing how they are fated to die, regardless of how close or far away the date of death is. When the target touches the stone, they will die peacefully and without visible damage, as to "spare" them the pain.[5]

Although Scolippi theorizes that breaking Rolling Stones or changing its shape significantly may change the target's fate, it is ultimately revealed that even the dust will take the shape of the prediction.[4] Thus it is impossible to change the fate predicted by Rolling Stones, but breaking it will still stop it from chasing people.

Those close to Rolling Stones without being sculpted inside it are not fated to die.[5] This was shown by how Mista’s pistol somehow malfunctioned when he tried to shoot Scolippi, and how Mista was able to jump down a building and come out unscathed.[6]

This Stand gets its power from fate and moves by itself.[5][7]

When someone not targeted by Rolling Stones touches it, several words or sentences such as Please kill me (オレヲ殺シテクレ, Ore wo koroshite kure) appear on their skin.[3] 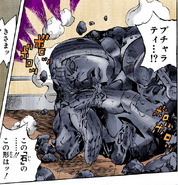 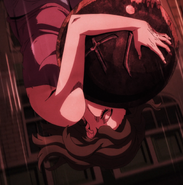 Scolipi's Girlfriend throwing herself off a building with Rolling Stones 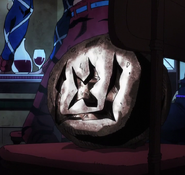 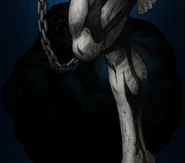 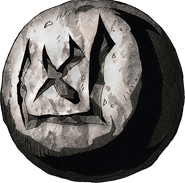