"Roundabout" is a 1971 single by the British progressive rock band YesW from their 1971 album FragileW. It is used as the ending theme for the first season of JoJo's Bizarre Adventure: The Animation, which covers both Phantom Blood and Battle Tendency.

The ending depicts an Aztec mural depicting the history of the people that used the Stone Mask, beginning with the Aztec chieftain killing the woman and her spilled blood running through the mural, whilst images of the various characters in the series are also displayed. The mural also displays the eventual destruction of the vampirized Aztecs by the Sun, culminating in the blood reaching the Stone Mask, causing it to activate.

While the images alter over the course of the arc, of particular note is the version from episode 1, which uses the initial 12-year old versions of Jonathan, Dio, and Erina. This is the only episode in this period and the actions from episode 2 and onward adapt the main story, which takes place 8 years later.

The second version of the ending changes into an upward vertical scroll, along with a shadowed background. A circle of light regularly crosses the screen, showing that the viewer is trying to inspect the mural via flashlight. The animation begins with the Stone Mask breaking into pieces, before scrolling upward. The mural depicts the Pillar Men as well as images of tribesmen worshipping the power of the Stone Mask.

The animation ends on an image of the Red Stone of Aja placed upon a final part of the mural. 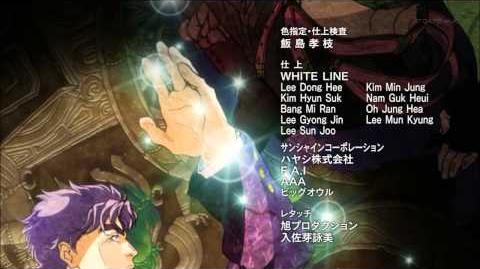