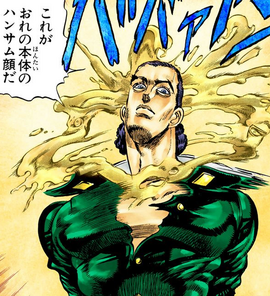 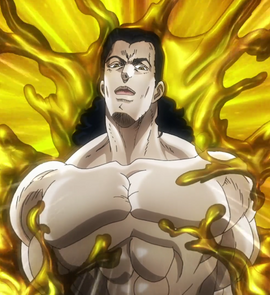 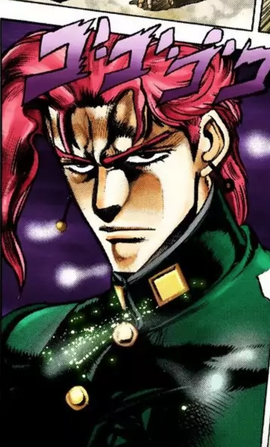 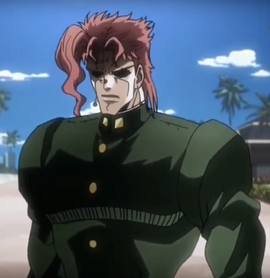 Rubber Soul has dark, curly hair and a muscular build. He is bare-chested and wears pants and shoes. His Stand grants him the ability to grow larger and to change appearance at will.

Rubber Soul was hired by DIO with the promise of earning 100 million dollars as a reward for killing Jotaro.

He has a rather disturbing personality: he is extremely rude and impolite, showing neither respect nor mercy for people and animals, as they are beings that he only sees as food for his Yellow Temperance. He does not seem to be particularly intelligent and he is easily angered. He wanted to ambush Jotaro with Kakyoin's appearance, but his unusual behavior blew his cover. He is also narcissistic and arrogant, referring to himself as handsome and believing his Yellow Temperance has no weaknesses, taunting Jotaro and bragging about his abilities while underestimating Jotaro's abilities. He is also somewhat perverted, as he fondle's the boobs of the woman he's disgused as.

Rubber Soul is also very violent; he attempts to kill a pickpocket by breaking his back and remorselessly eats a dog under the eyes of its master with his Stand. In order to grow bigger, he did not hesitate to eat even bugs.

In spite of this, he is very cowardly, giving away the names of his allies in order to escape Jotaro's wrath and having a strong fear of being hit or hurt in general.

Rubber Soul's Stand is Yellow Temperance; a sticky, rubbery mass bound to and encasing his body which consumes any other organic substance it comes in contact with. The Stand defends him from all forms of brute force and allows him to effectively impersonate others. It is a Stand all people can see and touch.

The stand represents the Tarot Card, TemperanceW. Temperance is a warning that indicates one must exercise calmness and balance or suffer defeat. Jotaro's first instinct when fighting Rubber Soul is to behave erratically, which puts him at a disadvantage. Only when he accepts Yellow Temperance is a fearsome Stand and plans his next move does he win. He mimics Joseph Joestar's "Secret technique" and overall fighting style when doing this, as Joseph is known for being calm and composed even in the most desperate situations.

While the Joestar Group is in Singapore looking for tickets to travel to India, Rubber Soul uses his Stand to assume the appearance of Kakyoin when Jotaro Kujo and Anne were looking around. At that time, Joseph uses Hermit Purple on a television set so he and Avdol can anticipate DIO's next move. Through joining voice segments from different TV programs, the Stand cryptically hinted "Kakyoin" as a traitor just before DIO destroys the TV.

Jotaro begins to be suspicious of "Kakyoin"'s strange behavior following his attack on a pickpocket and his use of words. After lying that he bought the tickets for India, Jotaro tricks "Kakyoin" to the cable cars where he punches him for his sudden attempt to push him off the building. The resulting punch sends Rubber Soul into a cable car as he discards his disguise while revealing that Jotaro has a fragment of Yellow Temperance on his finger. Faced with the danger of being devoured by the Stand, Jotaro jumps out of the cable car, Rubber Soul gloating that he has no need to chase him. Rubber Soul gets off and enters a cable car in the guise of a woman just to see Jotaro's futile attempts to freeze the Stand fragment. Rubber Soul reveals himself and gloats of his Stand's invincibility while it consumes a dog that happened to be in the cable car. Jotaro is forced to use his grandfather's final secret technique of running away by punching a hole in the bottom of the cable car and dragging Rubber Soul with him into the water below.

As Rubber Soul is forced to lower his Stand's guard to breathe, Jotaro gives the now powerless Stand user a broken nose and jaw before interrogating him about the remaining assassins. Rubber Soul reveals their cards to be the Empress, Emperor, Death and Hanged Man, the fourth belonging to J. Geil, the man Polnareff is after. Once out of the water, Rubber Soul spots an opportunity to disable Jotaro by having his Stand travel through a manhole into a drainage pipe and catches him off guard while gloating that killing Jotaro alone is enough for his financial security. But Jotaro counters the attempt by using Star Platinum to punch the drain and increase water pressure, breaking the manhole open and sending Rubber Soul flying back into the water. Rubber Soul begs for mercy as Jotaro proceeds to finish him off with a barrage of punches by Star Platinum.

In the game, Rubber Soul instead briefly imitates Devo and battles the player's group on a hotel rooftop.

Rubber Soul is one of the several characters added in the arcade update. Looks-wise, he is a palette swap of Kakyoin with a taller build and a different face, and his Stand is a yellow-colored Hierophant Green. He is not encountered in the Story Mode by any of the main characters (arcade version) but has his own storyline as a secret character.

In his own story, Rubber Soul is hired by DIO to assassinate Jotaro and his companions. His story lacks any notable cutscenes aside from the ending after the player defeats all of the heroes. He claims that he is the luckiest man in the world and that no one else could earn one hundred million dollars by fighting for only a few minutes.

He is also encountered as a normal enemy in the PSX port's Super Story Mode. The Player will receive a Secret Factor bonus if they allow him to perform his "Rero rero rero" taunt.

Rubber Soul might essentially be a palette swap of Kakyoin, but his playstyle differs greatly. He lacks an active Stand and instead elects to call Yellow Temperance to the battlefield temporarily for his special attacks. His moves tend to be slow and clumsy, as he cannot block or perform any follow-up attacks (aside from his light punch) while Yellow Temperance is still visible on the screen.

His special Stand technique allows Rubber Soul to counter an oncoming attack by forming a rubbery shield around his torso and knocking the opponent airborne. This is commonly followed up by his first super technique.

Rubber Soul's intro mimics a scene from his initial appearance, during which he eats several beetles and grows in size, making the sprite different from Kakyoin's. Also, if Alessi uses his Stand power on him, Rubber Soul does not turn into a child but rather reverts to the fat woman he took the appearance of in the cable car.

Rubber Soul appears as one of the several Part 3 characters who possess a Metal Striker. His Finish Move has Yellow Temperance envelope the target Striker, melting them. 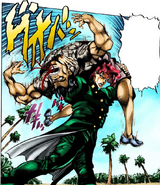 Rubber Soul (with Kakyoin's appearance) attempts to kill a pickpocket

Rubber Soul's face (as Kakyoin) is destroyed from Jotaro's punch 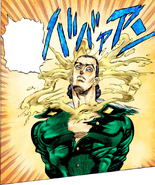 Rubber Soul (with a fat woman's appearance) absorbing a dog 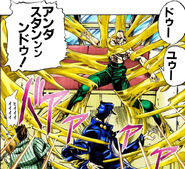 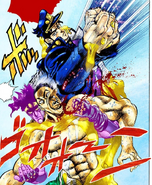 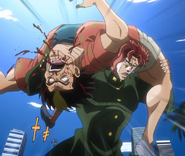 Rubber Soul (with Kakyoin's appearance) attempts to kill a pickpocket

"Kakyoin" indulges in a cherry 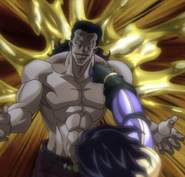 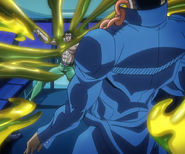 Rubber Soul's concept art of Heritage for the Future

Rubber Soul in Heritage for the Future.

Rubber Soul's true appearance in Heritage for the Future

Rubber Soul disguised as Kakyoin in Heritage for the Future