Ryohei Higashikata (東方 良平, Higashikata Ryōhei) is a minor character from Diamond is Unbreakable. He is the grandfather of Josuke and the father of Tomoko Higashikata.

A middle-aged man with a square jawline, cleft chin, and graying hair, Ryohei has only been shown wearing a standard police officer outfit.

Ryohei is shown as having a humorous personality, even threatening Josuke with a fake gun as a form of a joke and ignoring a report to him due to the accused being his daughter. However, he was genuinely dedicated to protecting the public, something that Josuke admired about him.

Ryohei is a respectable citizen serving as a police officer in Morioh for 35 years. One day he managed to arrest the killer Anjuro Katagiri.[3]

Ryohei is first revealed as a police officer passing by on a bike. A man reports to him that the woman walking away had just assaulted him after he had asked to give her a ride and demanded that she be arrested. Ryohei refuses and explains that the woman that the guy cussed out was actually his daughter, Tomoko. Ryohei disregards the man's request and goes to accompany Tomoko home.[4]

The next day, Ryohei returns home after working overnight and asks Josuke how was school. Josuke explains that he is waiting for somebody to come over soon and that Ryohei should go bother Tomoko instead. Josuke walks to the window to talk with Jotaro, but while doing so, Ryohei sees the bottle that contained Aqua Necklace. Tricked by the Stand to think it was a simple whiskey bottle, Ryohei opens it, causing the Stand to escape and attack him. Turning around, Josuke finds Ryohei injured on the ground bleeding from his eyes and mouth. Josuke is able to heal his physical wounds but realizes he is already dead. His room is left as it was before Ryohei's death, as a symbol of his memory until his daughter gets the courage to take care of his belongings, and his death causes Josuke to vow to rid the town of Morioh from evil Stand users. Aside from Josuke and Jotaro, it was believed that his death was caused by a brain tumor.[5]

Ryohei has a more prominent role in the movie, being the driving force that moves Josuke's actions. A running theme is him wanting to protect the city of Morioh.

He's first seen during the arrest of Anjuro Katagiri who had murdered a local resident named Yamashita. Ryohei later reappears to lecture a young adult named Masaya Yoshizawa who quit his job, advising him to call him whenever he needs help. When Masaya's friend dies due to Aqua Necklace and the former attempts to rob a convenience store under Aqua Necklace's control, he becomes saddened and punishes Josuke for putting a civilian in danger.

At dinner with his family, he remarks how happy being with them makes him. When he falls asleep, Tomoko mentions how Josuke is starting to look like his father but Josuke says that if he looked like anyone, it would be his grandpa Ryohei.

The following day, he´s seen exercising so he can become stronger in order to protect Morioh. After Josuke captures Aqua Necklace in a bottle, Anjuro changes the color of the water to resemble Ryohei's alcohol, tricking him into drinking it while his grandson is preparing the bath for Tomoko. Josuke attempts to heal him when he finds the bottle missing but it was already too late.

Before his funeral, Josuke goes through a sketchbook in his room detailing the mysterious murders of Reimi Sugimoto and her parents. Tomoko tells Josuke how Reimi was Ryohei's source of encouragement and he regrets not being able to protect her the most. He was awarded a watch for his 20th year of service but he smashed it against a wall, believing he was a failure of a policeman if he couldn't even save a young girl. Since then, he didn't care for promotion and only strived to protect his town. Some of the attendees to his funeral were Koichi and Josuke's admirers.

Ryohei talks to his daughter's "admirer"

Taking a moment to talk with Tomoko 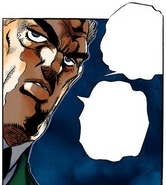 Ryohei worried about the crimes

A memorial shrine dedicated to Ryohei

Another photograph of the Higashikata family

Ryohei talks to his daughter's "admirer"

Taking a moment to talk with Tomoko

A memorial shrine dedicated to Ryohei 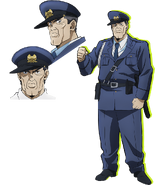 Ryohei Arriving To An Apartment, Calling The Residents To See If They Are Inside

Ryohei Greeting The Residents Of Morioh In The Morning

Ryohei Looking Out For Masaya Yoshizawa

Ryohei Hitting Josuke After Discovering He Was At The Hostage Situation

Ryohei Eating With Tomoko And Josuke

Ryohei Deceased After Being Attacked By Aqua Necklace