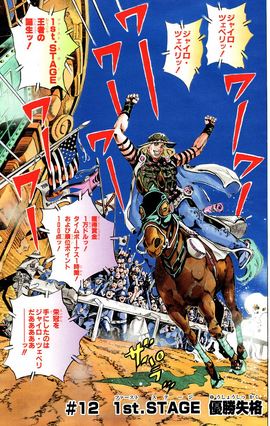 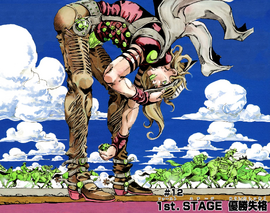 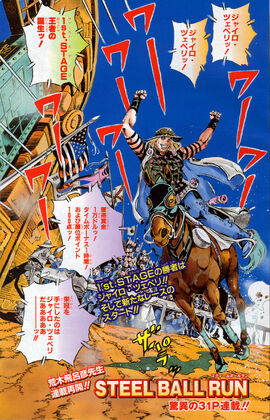 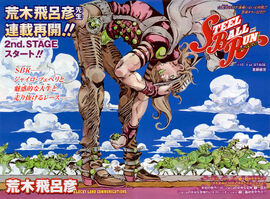 Gyro finishes the first stage in the first place. To celebrate the end of the first stage, Steven invites his VIP to a small cocktail party; his assistant then informs him that upon research, Gyro came to America in a boat owned by European royalty, to Steven's astonishment. Suddenly the announcers declare publicly that Gyro endangered one of the competitors, Sandman, when he threw a ball toward him. He is subsequently relegated at the 21st place and receives no point. The final ranking includes:

Enraged, Gyro crashes the party by ruining the champagne with the Spin. Johnny catches one of the flying corks. Meeting the ex-jockey, who reaffirms his determination at following him, Gyro teaches him the 2nd Spin lesson: "to work on those muscles". The Italian teaches that the weapon itself is the rotation, the Steel Ball being merely vectors for the Spin. He also explains that the Spin will dull the skin's sense and tell him to open his hand. Johnny sees the cork still spinning in his hand without him having noticed. Johnny uses the cork on Slow Dancer's leg, stimulating it and managing to get off his horse using the leg as a platform. Gyro then proposes Gyro to accompany him during the 2000 km that is the second stage.

Later, Steven and his wife Lucy are brought to a crime scene where three competitors have been violently eviscerated. The sheriff tells Steven that this was a murder and that the culprit, hidden among the competitors, will try to murder his way to the $50,000,000 prize.

Retrieved from "https://jojo.fandom.com/wiki/SBR_Chapter_12?oldid=384755"
Community content is available under CC-BY-SA unless otherwise noted.