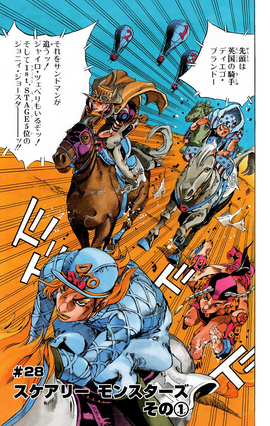 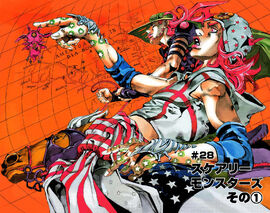 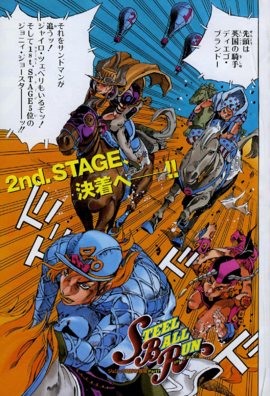 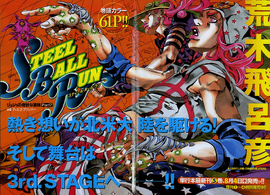 At the end of the 2nd stage, every major contestant races toward the finishing line. Johnny catches a newspaper and in the photograph of one of the Rocky Mountain peaks, he recognizes the shape of the words "Movere crus" on his arm. Johnny yells at Gyro to look, distracting him at the last moment and making him lose the stage as well. Diego finishes first, then Johnny, then Sandman, and finally Gyro cross the finish line and proceed immediately to the 3rd stage.

The 3rd stage begins: The Rocky Mountain Breakdown, 510 km across the mountains.

In the presidential train, President Funny Valentine's agents have investigated the Pork Pie Hat Kid's death and recovered a tissue. The tissue presents the "Movere crus" words burned into it, and after examination, Valentine concludes that it is Johnny Joestar who has one Arm. He also reveals that he possess the Heart, the Corpse Part directly visible under the chest. Unbeknownst to Valentine, Lucy has listened to everything and is confused by these revelations.

In the Rocky Mountains, Johnny and Gyro meet an unhorsed and visibly hurt Diego, who aggressively tells them off. Diego is seen losing consciousness near a dinosaur skeleton. Soon Diego catches up to the duo, suspiciously energetic and joyful, and presenting signs of his skin shedding off. Diego proposes that they rest in a village nearby and Gyro has no choice but to accept, the mountains being full of bears and cougars. At dusk, Johnny prepares some coffee while Gyro comes out looking for food. Diego is acting more and more strangely, eating gastroliths and being somehow blind to immobile object yet being agile enough to catch a fly, to Johnny's bewilderment. Gyro comes back, complaining about the many flies in the house but soon discovers the corpse of a mauled black bear right under the window, and Diego has transformed into a dinosaur.