A Dream of Gettysburg 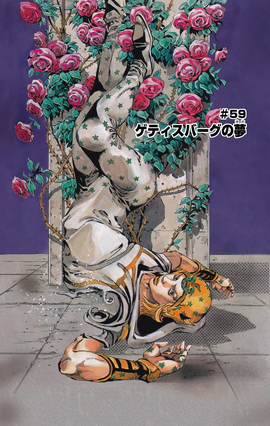 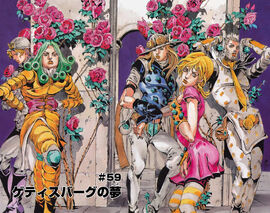 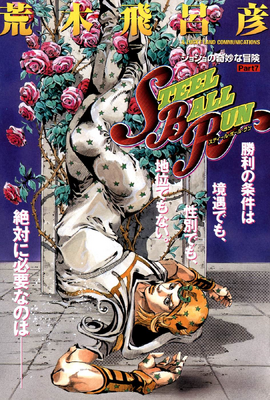 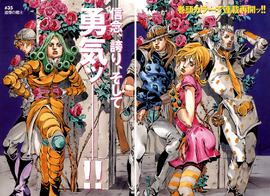 A Dream of Gettysburg (ゲティスバーグの夢, Getisubāgu no Yume), originally House of Recollection, Part 4 (追憶の館④, Tsuioku no Kan 4) in the UJ release, is the fifty-ninth chapter of Steel Ball Run and the eight hundred eleventh chapter of the JoJo's Bizarre Adventure manga.

The duplicates proceed to tear out Johnny's legs, but he manages to avoid death by sucking himself into the holes Tusk ACT2 create. Johnny unlocks Tusk ACT3, which enables him to travel through the holes his nails create. Johnny is able to resist the duplicates and severely hurt Axl RO with his improved mobility, but the governmental agent is invincible to the attacks anyway. Axl RO takes the last Vertebrae from Johnny and prepares to exit the dump leaving Johnny to be torn apart.

However, Johnny manages to grab the Corpse through a hole before completely getting, out and proceeds to pull it so violently that the Corpse is being torn apart. Axl RO is enraged and stabs Johnny through the hole, killing him. Johnny's guilt has been transferred to Axl RO and he resurrects. A desperate Axl RO tries to kill Johnny with an axe, but he is suddenly shot in the throat. The shooter is revealed to be Valentine, who seizes all the Corpse Parts while Axl RO is bleeding out from his injury, being free of guilt as long as he is alive. Johnny is unable to stop Valentine who departs, having noticed that the Right Eye is absent and subsequently deducing that the traitor is still roaming with it.

Retrieved from "https://jojo.fandom.com/wiki/SBR_Chapter_59?oldid=302742"
Community content is available under CC-BY-SA unless otherwise noted.