The World of the Stars and Stripes - Outro 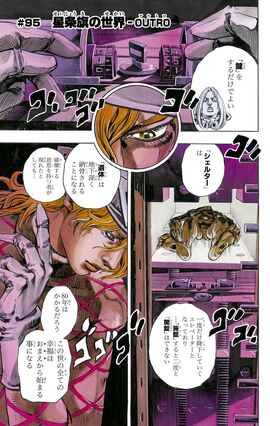 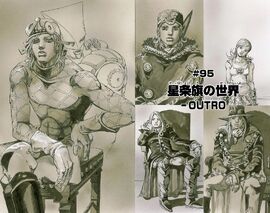 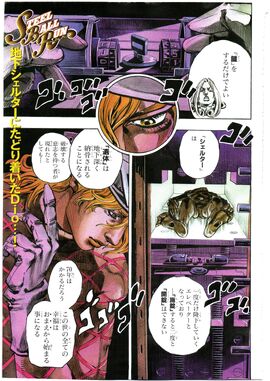 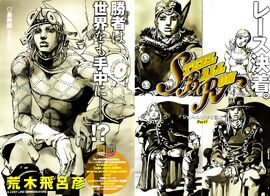 #5, 2011[2]
The World of the Stars and Stripes - Outro (星条旗の世界-OUTRO, Seijōki no Sekai -Autoro), originally The Whereabouts of Happiness (幸福の行方, Kōfuku no Yukue) in the UJ release, is the ninety-fifth and final chapter of Steel Ball Run and the eight hundred forty-seventh chapter of the JoJo's Bizarre Adventure manga.

After Diego reflects his attack, Johnny suffers from the effects of Tusk ACT4's infinite rotation and contemplates his approaching doom. After his victory, Diego reached his final destination, the basement of the Trinity ChurchW, to secure the Saint's Corpse. About to lock the Corpse, Diego is startled when he realizes someone is behind him. The company is none other than Lucy Steel, the girl who birthed the completed corpse.

The World immediately grabs Lucy by the neck and slams her against a wall to subdue her. Diego sees that she is alone, and asks why she's here, to which Lucy states that she completed this transcontinental journey for her own happiness. Diego surmises that Steven Steel is already fully informed about the corpse and the shelter, marking him as an eventual target. However, attracted by Lucy, he plans to make her his, not listening to the woman who tells him that she's been waiting for him in case Johnny was defeated. Tossing a bloody rag in which something is hidden, Lucy tells him she has fetched a present. It is shown that earlier, Lucy went to retrieve something with a machete and planned to overtake the race using the train. As Valentine detailed previously, if two people or objects of separate universes near each other in the same universe, both will be destroyed. Lucy, despite her state at the time, was still conscious enough to learn of this during the President's fight on the train.

Diego opens the rag and panicking at the sight of the object inside, revealed to be the head of the original Diego Brando. Immediately, the living Diego uses The World to stop time, and tries to flee up the stairs; unfortunately for him, his leg wound makes it impossible for him to escape. Furious, Diego tries to kill Lucy out of spite, but time resumes. Before he realizes it, the original Diego's head has already flown toward him. The head then merges with the living Diego's, who lets out one desperate cry before his head disintegrates and violently explodes, leaving him a bloody corpse at the bottom of the stairwell.

Elsewhere, Johnny lays on the ground waiting for his death, but Steven promptly reappears to his aid, riding a horse. Steven holds his hand out to Johnny to save him, which the latter grabs. As soon as Johnny is hoisted upon the horse, he calls ACT4 once more to shoot himself with an Infinite Spin bullet, countering the shot he was impeded by and saving himself. Meanwhile, the Steel Ball Run has ended.

Johnny then recalls his journey, during which he literally started to walk again and would always "pray" for his next step to go right. He also reminisces the events after the race. The winner of the Steel Ball Run is Pocoloco by default due to Diego's disappearance, securing the $60,000,000 to him. Diego was declared disqualified without apology after he was nowhere to be found, while the original Diego's horse was recovered. The excited crowd patiently awaited the President's speech, but the man never showed; the mayor of New York gave a speech in his place, shooting up Valentine's approval rating to 91%. Many criticized the race as inhumane due to the countless deaths during its events, but regardless it raised seventy trillion dollars in revenue, which Steven later donated to various causes. The race had concluded after four grueling months.

Finally, the top contenders of SBR race are revealed:

In the vault, Steven has sealed the Saint's Corpse and is glad that it ultimately belongs to no one, as Diego, its last possessor, died. Ultimately, the enthralling Holy Corpse lays in rest, safely within the vault. Lucy, satisfied, leaves the vault and ascends the stairs toward the sunlight.

Thereafter, Johnny boards a ship, joined by the body of his teacher and best friend, who gave meaning to his life, Gyro. The form Steel Ball Run staff greets him, but they briefly confront each other as they do not want a corpse on board. Nonetheless, Tusk's rotation makes removing the coffin impossible. Gyro's horse Valkyrie accompanies them as well, onward to Italy. Onboard, Johnny spots and greets the odd Japanese man Norisuke Higashikata who is with his daughter. It is revealed that a revolution took place at the Kingdom of Naples, deposing the monarchy and forcing the Zeppeli Family to move to a different, undisclosed country; Marco was granted pardon, who yet later died from a cold. Johnny blissfully reminisces upon the events of his bittersweet and bizarre adventure, from the moment he first met Gyro to the finish line of the race, as the ship sets sail.

Retrieved from "https://jojo.fandom.com/wiki/SBR_Chapter_95?oldid=321740"
Community content is available under CC-BY-SA unless otherwise noted.