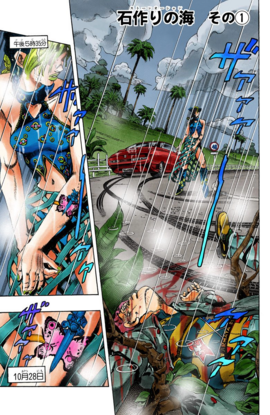 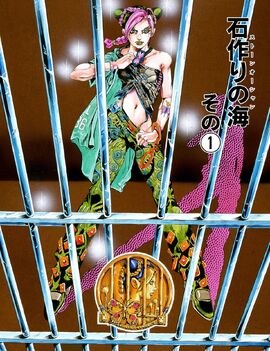 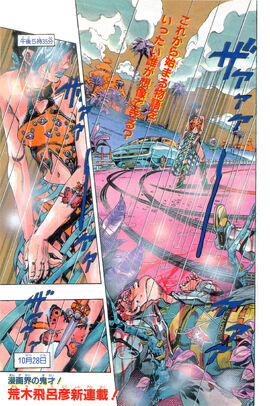 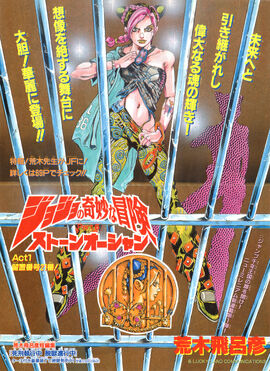 It is 5:35 P.M. Standing in a rainstorm, a young woman is seen beside a red car staring at the corpse of a man. She is shown to have a tattoo of a butterfly on her left arm.

In a holding room, various female prisoners are seen in different cells. One particular prisoner, a woman with braided hair, is annoyed by the noise of another prisoner. This prisoner is revealed to be Jolyne, who is banging her head out of embarrassment for getting caught masturbating by a guard. As she is taunted by another prisoner, Jolyne intimidates her, stating that she's able to tell her crime by examining the joint of her left ring finger. Just before Jolyne and the woman with braided hair are transferred to another prison, she asks if the woman would believe her if she claimed that she was framed for her crime.

Jolyne is informed by her lawyer that she has been arranged to go to Green Dolphin Street Prison to receive her punishment for her crime. The lawyer also brought essentials for Jolyne's use, with a shiny amulet from her father among them. After opening the amulet, Jolyne cuts her finger with a chipped stone stored inside the amulet. Jolyne states that her father had never been there for her, and that it would be useless to contact him. On a photo inside the amulet, an image of her father wearing a cap and white clothing along with her mother is shown. She throws the amulet away and it drops into a drain.

Her full name is revealed by her lawyer to be Jolyne Cujoh.

Later, on the 6th of November 2011, Jolyne is seen talking to the same woman with braided hair, on a vehicle heading to Green Dolphin Street Prison. She reveals her name to be Ermes Costello, and informs Jolyne that money is necessary in the prison. Jolyne manages to guess where Ermes is hiding her money; her left breast.

After Jolyne exits the vehicle, she hears a conversation despite no one speaking nearby. As she is listening to the conversation, she discovers a string coming out of her injured finger. The string leads back to the truck she was on, and the conversation she was hearing is revealed to be Ermes being threatened by the guards. Using the string, Jolyne manages to stop a guard from striking Ermes by cutting the guard's ear off, obtaining some money in the process.

Retrieved from "https://jojo.fandom.com/wiki/SO_Chapter_1?oldid=331903"
Community content is available under CC-BY-SA unless otherwise noted.