Made in Heaven, Part 3 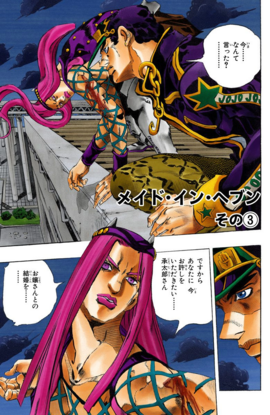 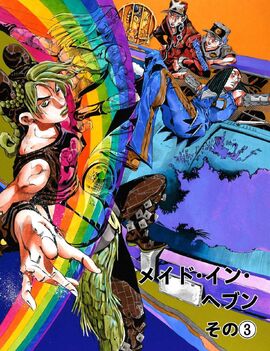 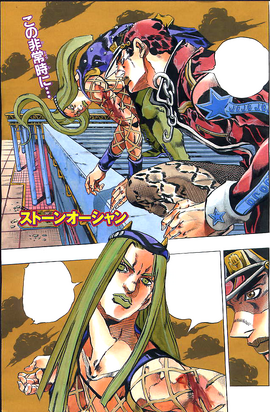 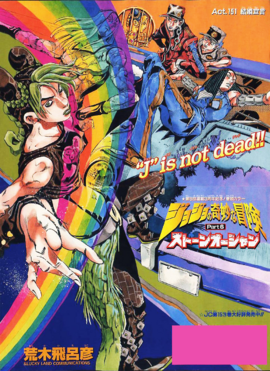 Made in Heaven, Part 3 (メイド・イン・ヘブン その③, Meido In Hebun Sono 3), originally Marriage Announcement (結婚宣言, Kekkon Sengen) in the WSJ release, is the one hundred fifty-first chapter of Stone Ocean and the seven hundred forty-fifth chapter of the JoJo's Bizarre Adventure manga.

Dumbfounded, Jotaro asks Anasui to repeat himself. Anasui reiterates his request of Jotaro's permission for marrying his daughter. While everyone is distracted looking for Pucci, Anasui explains that despite his slim chances of getting married to Jolyne, he wants to confess as Jolyne is the light of his life. Jolyne interrupts the conversation, reminding everyone that they should stay close together, as Pucci is certain to look to kill them all now that he completed his power.

Anasui reiterates his demand, prompting Jotaro to grab Jolyne and pull her closer to himself. Jotaro then analyzes the situation, deeming that even with high speed, Pucci will be visible when he approaches and explaining his power in detail. With Jotaro's time stop, Pucci is also probably reluctant to risk climbing on the roof.

Everyone watches the surroundings. Jotaro sees a glimpse of the enemy and stops time. However he realizes too late that Pucci used his Stand to bend a tree, using the spring action to propel himself. Time resumes, and Pucci suddenly appears behind Jotaro. Star Platinum tries to pummel the enemy, but it is too fast and Pucci slices Jotaro's throat.

Retrieved from "https://jojo.fandom.com/wiki/SO_Chapter_151?oldid=346439"
Community content is available under CC-BY-SA unless otherwise noted.