Remains of the Saint

The Saint's Corpse (聖人の遺体, Seijin no Itai), also called the Holy Corpse Parts (聖なる遺体, Sei naru Itai) is central to the plot of Steel Ball Run, and of influence in JoJolion.

Apparently ancient human remains; the Corpse Parts are first described as belonging to a Saint, miraculously self-preserving, and disposed to imparting miraculous (Stand) powers (in the style of certain religious relics). Although never confirmed as such,[1] they're heavily implied to belong to Jesus.[2]

The Parts often grant those merging with them Stand powers (in a function similar to the Bow and Arrow of the original timeline).

Parts react differently to different characters, as seen when Gyro and Diego each took possession of an eye: Gyro acquiring Scan, an ability unrelated to Stand powers, with Diego retaining properties of a Stand effect used on him (the dinosaur powers of Dr. Ferdinand's Stand Scary Monsters).

When completed, the relic blesses its owner as well as the land it is on.

As discovered by Valentine, the Corpse is utterly unique, existing in only one dimension in the multiverse;[9] thereby establishing a "root dimension". In neighboring dimensions, instead of the Parts, the racers compete for other precious items, such as diamonds.

The Steel Ball Run race itself is part of Funny Valentine's scheme to find and collect the Corpse Parts. With his direction, the entire Corpse eventually merges with Lucy Steel, before separating and being carried to and locked in a vault beneath Trinity Church, New York City, by the other Diego Brando.

After the conclusion of Part 7, Johnny Joestar retrieves the Corpse in an attempt to save his wife's life.

The Corpse Parts are increasingly implied to belong to Jesus, although this is never explicitly confirmed.

Upon the Saint's death somewhere on the Western coast of North America, a massive earthquake and storm tore the land, splitting his Corpse into 9 Parts, which were then distributed by various forces of nature eastwards, resting at the locations he indicated they would to Joseph of Arimathea.

Prior to the Steel Ball Run race

In the Devil's Palm, each member of the military unit Funny Valentine belongs to perishes except for him, having fallen unconscious onto the site of the Corpse's Heart, when it merges with him, saving his life and motivating his search for the remainder.

Funny Valentine reveals that he guided the planned route of the Steel Ball Run race with the aim of scanning the country for the Parts besides the Heart, which clues him as to their rough location. The race's manager, Steven Steel, is only vaguely aware of the Corpse's existence.

The Corpse is discussed euphemistically as though belonging merely to a saint.

The competition for the Parts

Coming from Naples, Gyro treats the news of the existence of the Corpse very seriously.

Johnny Joestar wishes to collect the Corpse in order to raise himself from a perceived "negative" position as the result of his family misfortunes and personal mistakes. Johnny is willing to sacrifice the corpse to keep it out of misguided hands, though this doesn't sit well with Gyro as he believes the corpse should be preserved.

Diego Brando reads Valentine's intention and the power of the Corpse, resolving to use it to support his own fierce ambition.

Hot Pants reveals a deep desire to acquire the entire Corpse in order to help her absolve herself of what she sees as a cardinal sin in her past. She seems more aware that the Corpse must belong to Jesus.

President Funny Valentine holds a deep sense of patriotism and seeks to use the corpse's power to bring great happiness and good fortune to America, having formed the Steel Ball Run around the search for the corpse parts.

Sensing an obligation to defend the Corpse from possession by its other pursuers, Gyro and Johnny come into conflict with Valentine, his agents, Diego Brando, and Hot Pants.

When collected by various racers, many Corpse Parts generate clues as to the location of the next Part.

Blackmore, when handling the Spine, receives a vision of Jesus, shortly before he is killed.

Valentine's plot unfolds as he explains that the Corpse represents the ultimate power, existing in only one dimension in the multiverse, accessible only via his Stand, Dirty Deeds Done Dirt Cheap. The one possessing it, like the first person on a round table to take their napkin from their left or their right side, will be empowered to decide some aspect of the fate of the world. His intention is to use it for the enduring security and dominion over others of his country, the United States.[10] The corpse seems to see Funny Valentine as a “good person” despite the fact that Johnny Joestar is the protagonist of Steel Ball Run.

Lucy Steel, with Valentine's direction, eventually merges with the entire Corpse, beginning a metamorphosis that also lends her a Stand.

After Valentine's defeat, as directed further by him, the second Diego Brando seals the Corpse in a vault in the basement of Trinity Church, New York City, in order to establish "the center of the world" with Diego as its leader.[11] Waiting, stating that "the Corpse is not [his]", Lucy Steel kills him.[12]

Sealed away, it seems that the only ones left with the sure knowledge of the Corpse's existence and location are Steven Steel, Lucy Steel, and Johnny Joestar. Steven states his belief that the Corpse belongs to no person or nation and is safest sealed away in the vault.

Johnny Joestar is anguished by the terminal illness of his wife, Rina Higashikata, and decides to retrieve the Corpse from its vault and try to use its power to heal her. Chased by U.S. government agents, including Lucy Steel, upon his sudden death in Morioh, Japan, it is currently presumed that these agents returned the Corpse to its vault. 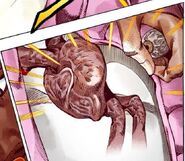 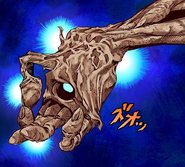 The guardian of the completed corpse, seen as Lucy merges with it within Valentine's fireplace.