In a Silent Way

Sandman (, Sandoman), which in reality is a mishearing of his Native American tribe name that translates to Soundman (He who creates "sound") (サウンドマン (「音」をかなでる者), Saundoman ("Oto" o kanaderu Mono)), is a side character featured in Steel Ball Run. Although beginning as a fairly neutral party, he later becomes a minor antagonist, after being bribed by Funny Valentine.

Sandman comes from a Native American tribe, which he had become ostracized from for embracing the "white man's" culture. He believes that the only way to stop the encroachment of his tribe's land is to play by the settlers' rules, thus he enters the Steel Ball Run race hoping to use the prize money to buy back his ancestor's land and protect his tribe. Sandman establishes himself as one of the fiercest and unique competitors in the horse race, choosing to travel completely on foot. Eventually, he is bribed by the President, who promises to personally fund his goal, if Sandman succeeded in hunting down Johnny Joestar and Gyro Zeppeli to retrive their Corpse Parts for him. With the help of Diego Brando, Sandman then ambushes the protagonists near the banks of the Mississippi River.

Sandman is a Stand User, wielding In a Silent Way to give physical form to sounds.

Sandman is a man of average to above-average height and athletic build. He wears his mostly light hair in two long braids crossing his face. He is sparsely clothed, with a few tattoos.

Sandman is a Native American with a singular and cynical outlook on the world but who is also loyal to his tribe.

Sandman is introduced as an open-minded member of his tribe, shown for instance in his possession of books expressively forbidden by the tribe due to originating from white settlers[3] and having developed his own unique and extraordinary running style while ignoring his tribe's own techniques.[4] Sandman is critical of his fellow tribesmen, highlighting to his sister their outdated views and misconceptions. For instance, he states that the idea of a claim to an ancestral land is out-of-date when the majority of the population now thinks on a financial level.[5] Nonetheless, he is willing to risk participation in a continent-spanning horse race to get back his tribe's stolen lands, showing a great degree of loyalty.[6]

Despite his open-mindedness, Sandman still treats the "white man" fundamentally as an enemy and maintains the idea that their society is governed by money. He ultimately sides with Funny Valentine, working to take the Corpse Parts in exchange for the funds to buy back his ancestors' lands. Disinterested in the corpse and the stakes at play, Sandman only considers it as a potential bargaining piece. When he confronts Johnny, Sandman ultimately blames the white man's obsession with money as the reason of their current feud.[7]

Sandman shows a great deal of determination and confidence. During his first appearance, he notably jumps under a running horse to purposefully be kicked high in the air and escape pursuit.[8] Learning about the Steel Ball Run race, Sandman also decides without hesitation to leave his tribe and home to cross the United States alone on foot, expressing great confidence in his skill. However, his sister points out that he is solitary and stubborn to a fault since childhood, making it difficult for others to understand him.[9] Sandman also doesn't shy away from committing questionable actions and readily fights Johnny and Gyro with the intent of killing them.

Sandman also shows a slightly honorable side. During the first stage, he gives up some of his time to give Pocoloco a hint and help him climb a cliff[10] and after he wins the first place in the first stage due to a technicality, makes the effort to "repay" Gyro and warn him about an incoming storm.[11] Finally, although he was ready to kill Johnny and Gyro, he is the only enemy to have taken the time to ask them for their Corpse Parts directly, even though he threatened them.

Sandman is very close to his sister. She is the only person with whom he shares his personal opinions and his final thoughts are to her, hoping for her happiness.[12]

Main article: In a Silent Way

Sandman's Stand, In a Silent Way, lends solid, offensive substance to sounds of his creation.

Sandman is a pre-eminent athlete, possessing fantastic skill and technique in running and gymnastics; able to run distances other racers consider sensible only by horse as well as rivaling a horse's speed, and quickly negotiate a range of natural geographies.

Steven Steel explains that through sheer training, Sandman can make his heels only briefly touch the ground as he runs, meaning he can "recycle" the energy of his feet's impact and protect his legs from fatigue. When going down a slope or a cliff, Sandman can only hop on the relief several times in order to reduce the impact. This running style allows him to take shortcuts through natural obstacles horses can't cross.

Sandman ("Soundman" amongst his people) is the first character introduced in the series. He is a member of a Native American tribe who learned to read the "white man's" books. When the tribe discovers the books in his teepee, they hunt him down to scalp him. It is then that Sandman is revealed to have developed a special running technique that allows him to run long distances without having to rest. He escapes them by means of trickery and possibly the use of his stand, and then meets his sister in the hills. It is here that he discusses his plans to enter the Steel Ball Run race in the hopes of obtaining enough money to save his tribe's land, and also points out locations where someone has been studying Spin in the mountains.

Sandman is then seen entering the race, where he is a top contender for several stages.

Sandman appears for the last time on the Michigan lakeline, with a stand of his own. He works alongside Diego Brando and uses their combination to create dinosaurs that carry sound-effects. It is there that he fights with Johnny Joestar and Gyro Zeppeli. During the fight, Sandman seriously wounds Gyro, but becomes overconfident in thinking that he will kill Johnny, who uses his newfound Golden Rectangle technique to injure the overconfident Sandman, leading to his death. 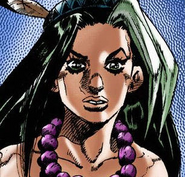 Sandman is defeated by Johnny Joestar 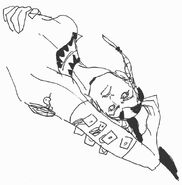 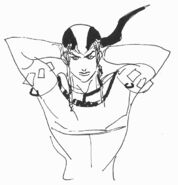