Santana (サンタナ, Santana) is an antagonist featured in Battle Tendency.

Discovered slumbering inside of a stone pillar in Mexico by Speedwagon and the Germans, this individual is christened as "Santana" and is the first featured member of the Pillar Men. Rampaging through a research facility, he eventually meets and fights Joseph Joestar.

Santana looks like a tall and muscular man possessing long, fair hair and two small horns at the top of his head. His only clothing is a small loincloth. He has a painted or tattooed symbol on his right lower eyelid shaped like a gear.

Santana is, like his brethren, violent, and aloof. Also, like the other Pillar Men, he is shown to be very intelligent, capable of disassembling weapons far ahead of his time, and of learning other languages from only moments of exposure to them. It is implied by Kars that his role in his group as a guard dog was to keep the power and origin of the Stone Mask a secret from future generations of humans.

Santana initially has a detached attitude toward everything around him, not caring for the humans and calmly escaping his prison. When he's exposed to Joseph's Ripple for the first time, Santana remains unfazed and experiments with it a little. Even when exposed to sunlight, Santana kept calm and used Stroheim as a shield against it.

Like all Pillar Men, Santana is dismissive of humans, comparing them to primitive animals capable of using only tricks and games. When Joseph exasperated him with his antics, he lost his calm and began to insult him. He began to threaten Joseph when he tried to impede his escape and only felt true fear when he was turned to stone by the sun.

As a Pillar Man, Santana is capable of performing the most basic abilities of one. While much younger and not as experienced, Santana has demonstrated several techniques similar to ones used by those in Kars' group, as well as some of his own.

Santana was born about 8,000 BC ago. Santana had originally lived in Mexico with the other Pillar Men. After Kars' rampage and slaughter of the Pillar Man race, the child Santana, along with Wamuu, were adopted and trained by Kars and Esidisi. He was later left behind in Mexico by Kars, who deemed him only useful as a guard dog, while he and the others left for the old world to find a flawless Red Stone of Aja.[2] As a result, Santana would be unaware of the energy called Ripple which the other Pillar Men learned and developed defenses against. Eventually, claiming that it is because he used too much power, Santana entered a deep rest by fusing himself into a pillar within a temple that was one of the proponents for Kars' Stone Mask project.

Santana is discovered in a Mexican pyramid in 1938 by an expedition team led by Robert E. O. Speedwagon that is later betrayed by Straizo. However, Straizo notices that Santana had been absorbing the spilled blood and to prevent Santana from awakening, dumps the bodies of the men he attacked into a nearby river. Santana is then excavated and studied by a team of Nazis in an underground base. The team, led by Major Rudol von Stroheim, conducts live human experiments with the Stone Mask in order to try to strengthen the Nazi Army. The blood from multiple prisoners causes the Pillar Man to awaken, Stroheim naming the being "Santana" while he and the rest observe him. When one of the vampires created is brought into the chamber, Santana allows the creature to attack so he could absorb the vampire and gain nourishment. Despite the Nazi's initial opinion that he was a dim-witted savage rather than an Übermensch, Santana catches everyone off guard further by uttering Stroheim's full name once he finished his meal.

Santana, sensing hostility within the iron, fortified room, breaks many of his own bones in order to squeeze himself into the 4-by-20cm ventilation outlet of the room, doing so at a speed faster than human eyes can perceive. By the time Stroheim realized what occurred, Santana reached the observation room while entering the body of a German who was too close to the vent. After absorbing the host and getting shot at, Santana fires the bullets inside his body from his fingertips, killing almost everyone in the room. Joseph Joestar (disguised as a Nazi) protects Speedwagon, Stroheim, and himself from Santana's attack by channeling the Ripple into Stroheim's hair and using it to shield them.

Toying with the Pillar Man, Joseph assumed Santana killed the Nazis out of self-defense before being attacked. Santana, expressing annoyance at Joseph's antics, realized he could not absorb the human and attempted to do the same with Speedwagon out of assessment. This enrages Joseph as both learn that ripple was preventing Santana's cells from digesting him. Using this to his advantage, Joseph allows himself to be absorbed by Santana and then unleashes the ripple from the inside, splitting the Pillar Man in half. As Santana's body begins to regenerate, his torso is dragged by Joseph to be exposed to sunlight and turn into stone again. After a struggle involving Stroheim sacrificing one of his legs, the door to the outside is open and a fully regenerated Santana is exposed to the light. But the Pillar man quickly forces himself into Stroheim's body in order to escape the sun while attempting to hide in a well, forcing the Nazi to sacrifice himself to leave Santana into the open.

Desperate, Santana charges Joseph as the two go flying down the well. Santana realizes too late that Joseph allowed him to enter the well as it was exposed to the sun's reflection, turning the Pillar Man back to stone with some damage caused by the fall. Santana's remains were later taken to the Washington branch of Speedwagon Foundation, the Pillar Man kept immobile by UV lights and revealed to still be alive. Santana's ultimate fate is never addressed.

Santana appears as a Boss in Area 4. The player faces him in a one-on-one battle using only Joseph Joestar.

Due to the game's release date, Part 2 had only reached prior to Esidisi's battle against Joseph. Thus, only Santana and Esidisi appear as the enemies faced during the JoJo's Bizarre Adventure part of the game, instead of Kars or Wamuu.

Santana is briefly mentioned during the dialogue in Part 2's Story Mode. For the Western version of the game, he was renamed "Santviento" to match the Crunchyroll subs. Initially, his name was "San Tan" in some press releases.

Santana is one of the several Part 2 characters who possesses a Metal Striker for the game. His Finish move has him fire bullets from his fingertips at the defeated opponent (similar to his retaliation against the Nazis), and his second special ability allows him to counterattack any Metal Striker enemy who attacks him by using his Rib Blades.

Santana makes his first playable appearance in Diamond Records. He was the first Pillar Man to be released for the mobile app. His 3☆ and 5☆ variants are both Courage type, meaning that they can buff their defense and knockback resistance under certain situations. He also has two 4☆ variants, with one being the aforementioned Courage type, and the other being Solitary, a type that steals HP and stats from teammates. He is the only Pillar Man to have two 4☆ variants, and the only Pillar Man bar Wamuu with a 4☆ or 3☆ variant.

Santana's Rib Blades make an appearance as a usable skill along with an ability that lets him shoot bullets out of his fingers. His 5☆ statue has a special move where he enters the opponents body, dealing damage to his opponent and restoring his HP. All of Santana's forms are notably HP-focused with the exception of his Solitary 4☆, which is more Defense-focused. 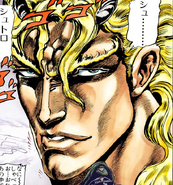 Close up of Santana 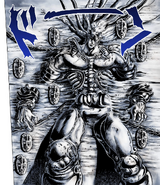 Santana slumbering in the Pillar

Awakening from the Pillar 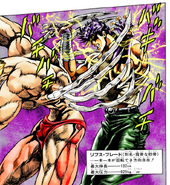 Santana petrified by the sun 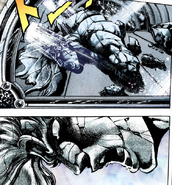 Santana kept under watch in the Speedwagon Foundation

Stuffing himself through a 2-inch tall ventilation shaft

Attacking Joseph with his Rib Blades

Santana in the ending credits

From the timeline for the Part 3 OVA

Santana Asleep In The Pillar 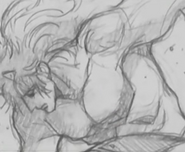 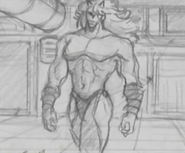 Santana During The Aftermath Of His Shooting Of The Nazis 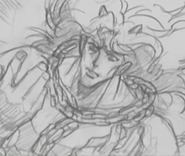 Santana Being Chained Up By Joseph

Santana Being Exposed To The Sun