Satoru is the head doctor of TG University Hospital, and presumed mastermind of the Locacaca Organization. Supposedly 89 years old, he is an elusive figure with almost no public presence despite being in charge of a major institution of medicine.

The original Satoru Akefu was a retired doctor of TG University Hospital who Tooru is impersonating with his stand. When Tooru discovered him, he was residing in a nursing home in the Ibaraki Prefecture, though it is implied he might have been killed.

Satoru is an elderly-looking man with a slightly stocky build. His arms and legs are noticeably slimmer than the rest of his body. He wears a dark-colored Bowler hat and suit, along with a lightly colored scarf with a pattern of irregular "-" shaped slits cut into it. He also wears dress shoes and uses a cane to walk.

From Chapter 90 onward, Satoru is depicted as having a thin furrowed face with prominent cheekbones, sunken eyes, and a large nose. His most notable features are a beard styled into multiple short spikes and a monocle on his right eye. His hair is lightly colored and much thicker than what a human at his supposed age would have. Much like his subordinate Wu Tomoki, the hair on the sides of his head is stylized into many round shapes. The hair on the top of his head is much more natural, although appearing somewhat unkempt. His sideburns feature a similar pattern, but are shaven into rectangles instead.

Satoru's personality is currently a mystery. He's a rather elusive figure despite holding an incredibly prestigious title. Similarly to other Rock Humans he demonstrates antisocial behavior, completely ignoring Josuke Higashikata, Yasuho Hirose, and Rai Mamezuku. While he avoids direct confrontation with the trio, he's a ruthless automatic Stand that attacks anyone attempting to chase after or find him.

Satoru is shown to be unexpectedly nimble and fast for a man that uses a cane to walk and is also approaching his 90s, a fact which caused Rai to question the doctor's alleged age on multiple instances.

Satoru is the Stand itself. His Stand form is mechanical in appearance, and possesses an automatic ability that functions at an extremely long range. The ability is activated when a target looks at Satoru's back, according to Mitsuba Higashikata. Once triggered, the ability remains active for a brief period of time. During this initial period, an affected person will frequently collide with objects in their environment. Any instance of a collision will result in a much more severe injury than would be possible under regular circumstances. This is best demonstrated when a discarded cigarette imbued with the Stand's power strikes Josuke's hand with enough force to pierce his palm.

A bystander was shown to suffer a sudden, fatal injury after coming into contact with Josuke's blood within moments of the latter being hit by a car that was presumably affected by the head doctor's ability. Smaller objects seem to cause more extreme and immediate damage (i.e. raindrops striking with the force of bullets) while the impact caused by larger objects takes a bit of time to effect a target (as seen in the aforementioned car example).

After Wonder Of U stops its initial attack on an individual, the ability will persist in a dormant state and reactivate any time the target makes any form of attempt to pursue its user. Reactivation of the ability can seemingly happen regardless of a person's distance from Satoru himself, and can be triggered by so much as the mere intent to pursue him.

As head doctor of TG University Hospital, Satoru seemingly oversees research on the Locacaca fruits and gives orders to fellow Rock Human doctors, such as Wu Tomoki, Urban Guerrilla, and Poor Tom. Due to his honorary position, he is stated to not be involved in any actual medical practice.[2]

In reality, Satoru Akefu is an identity assumed by Tooru as a way to conduct research under a human guise. The real Satoru lived in a nursing home in the Ibaraki Prefecture, distant from his family. Tooru presumably killed him and adopted his identity using Wonder of U for the next ten years.

Satoru along with his colleague Wu Tomoki attempt to meet with Poor Tom to retrieve the grafted Locacaca branch. They disguise as ambulance drivers and arrive at the Higashikata orchard. However, they are tricked by Jobin and Tsurugi Higashikata into getting an ordinary pear branch from Poor Tom instead. They realize it was someone else other than Josuke and Poor Tom who lit the orchard on fire and that the other party now has the real Locacaca branch.[3]

The Wonder of You (The Miracle of Your Love)

Satoru is pursued by Josuke Higashikata, Yasuho Hirose, and Rai Mamezuku. Completely ignoring them, Satoru sends his Stand after the three and makes his getaway on a bus. He's later spotted by Mitsuba Higashikata at both her son's elementary school and on the property surrounding the Higashikata House.

Josuke and Mamezuku discover that Akefu is scheduled to give a lecture on regenerative medicine. Deciding to pursue him to that lecture causes Akefu's Stand to activate and attack them.

Satoru disguised as an ambulance driver

Close up of Satoru's scarf 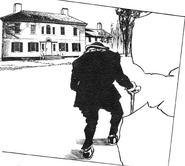 Satoru near the Higashikata household 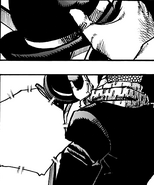 Satoru taking off his hat before the lecture

Satoru prepares to begin the lecture 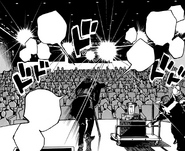 Satoru presents the Locacaca 6251 to the audience 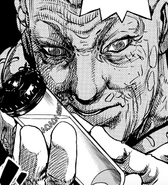 Satoru holds up a container of Locacaca 6251