Following Ferdinand's death, Diego Brando retains the transformation ability through the power of the Saint's Left Eye[1] and, as a result, develops his own version of the Stand.[2]

Transforming into the dinosaur Utahraptor; Diego gains stripes spelling out "DIO" all over his body. His hair turns into spikes that end in round, ball-shaped tips on the back of his head. Traces of his checkered shirt are still visible on his chest.

After being under the influence of the Stand for a while, Diego is able to turn into a more human-shaped form while still retaining sharp teeth, claws, dinosaur legs, and a tail, with a deranged, mad expression on his face.

As the Stand is bound to Diego's body, its appearance is based on the form he takes.

The dinosaurs created through Scary Monsters are blue and brown in the case of the small ones in all media featuring it colored.

Scary Monsters deploys the might and agility of the ancient dinosaurs in various ways, and can also take control of people through simple contact, making facing it a dangerous endeavour.

Scary Monsters' main ability is to infect other living beings with a virus which transforms them into dinosaurs,[3] but also allows the user to control them.[4]

The User needs only to touch a victim to begin the transformation, for instance, Diego grazing the horsehair of his Silver Bullet to transform the fleas into small dinosaurs.[5] Likewise, the dinosaurs may infect others with the virus by biting or scratching them.[6] However, should the user be severely injured, their power will disappear and all dinosaurs will revert to their original forms.[4]

The transformation is portrayed inconsistently, Diego's first transformation being gradual[3] while subsequent ones are instantaneous.[7] Scary Monsters seems to have no limits in terms of range or number of individuals infected, as it is able to transform a whole village of humans into a group of dinosaurs.[6] It is also free to create any type of dinosaur, from raptors,[8] to a T-Rex,[8] to much smaller dinosaurs.[6]

The original user, Dr. Ferdinand, would exploit his power to transform others, using them to either travel (by riding or hiding inside them[4]) or fight for him. Diego typically uses this ability to create armies of miniature carnivorous hybrids out of birds, rats or fleas[5] or turn his own horse into a dinosaur[9] for support while he personally fights the enemy.

Unlike Ferdinand, Diego is capable of changing his own body into a dinosaur, either completely or as a hybrid of the two.[7] Being bound to Diego's body, Scary Monsters allows him to fight against other Stands and physically damage them with his bare hands.

By partially transforming, Diego can use the enhanced senses and strengths of a dinosaur. He possesses increased stamina, strength, and speed, enough to compete with Dirty Deeds Done Dirt Cheap.[10] Moreover, transforming into a dinosaur grants him vision based on movement: the faster something moves, the better Diego can perceive it and thus the better he can avoid it. But as a result, he becomes vulnerable to slow attacks.[8]

During the race, Diego uses his sense to gauge his surroundings and deduce the optimal route for his horse.[11]

Introduced later in the story, Diego demonstrates the ability to alter beings transformed by his Stand into a hardened dormant state much like a fossil. The ability can be used a variety of ways, from fusing a being into a structure like a rock or a tree as a camouflage[12] to shaping the fossilized being into something more creative like candle holders. 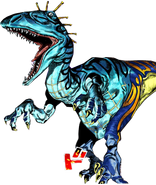 Gyro and Diego transformed into Dinosaurs

The infection in progress 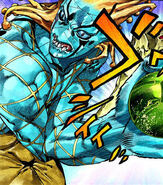 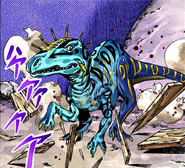 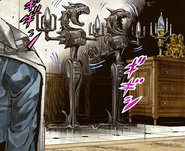 Fighting D4C with his very fists 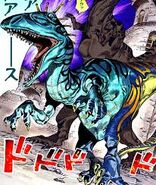 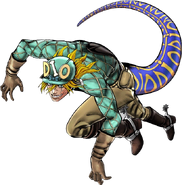 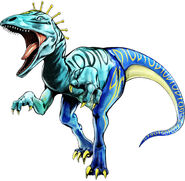