Scolippi is a sculptor who gets involved with Team Bucciarati and particularly Guido Mista, as he allegedly murdered his girlfriend and her father has requested the gang to avenge her. Scolippi is a Stand User and his Rolling Stones predicts Bruno Bucciarati's death.

Scolippi is an adult Italian man of lanky but athletic constitution. He has straight hair kept at shoulder-length decorated with a row of hair clips and a somewhat prominent bang on the right side. He also uses dark eyeliner. Scolippi wears a plain shirt decorated with metal plates on the chest and holed at the shoulders, and a dark trouser with a spiderweb motif on it. His crown of thorns and the hand injury he suffers because of Guido Mista may be reminiscent of Jesus ChristW and his StigmataW.

Scolippi appears to be somewhat withdrawn, meek yet benevolent. He is said to have avoided showing himself to his girlfriend's father despite having a committed relationship with her. Against Mista, Scolippi calmly puts up with Mista's violent and intimidation attempts, explaining how his powers work. However, Rolling Stones' nature allows him to know whether or not he's fated to die and thus has remarkable calm even with a gun in his mouth, as he knows if he will survive any given situation. Even after having been mistreated and misunderstood by both his ex-girlfriend's father and the assassins sent to kill him, Scolippi bears none of them any ill will, as he sees people as puppets who are unable to escape their fates. He even prays for Bucciarati's assassins when his Stand cannot chase them down anymore. Scolippi is also a firm believer in Fate.

Scolippi is a natural-born Stand user, wielding the rock-like Rolling Stones which chases and divines people's deaths and offers them a peaceful alternative. He does not have any control over his Stand.

Scolippi is introduced as a professional sculptor suspected of killing his girlfriend. Her father requests Bruno Bucciarati to bring him justice, as even the courts declared Scolippi innocent and not guilty of her death.

When Guido Mista is sent out to take care of the job and extract a confession from the sculptor, Scolippi denies having used his Stand to kill his girlfriend and is beaten and shot mercilessly while his explanation for his Stand's ability is brushed aside out of disbelief. Meanwhile, his Stand chases down Bucciarati, and Mista struggles to prevent it from doing so. When Mista finally believes Scolippi's explanations, Scolippi was already unconscious.

After Bucciarati survives Rolling Stones' ability, Scolippi worries for the difficulties that will lie ahead of Bucciarati's group due to his survival from Rolling Stones and decides to pray for their success. 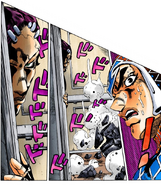 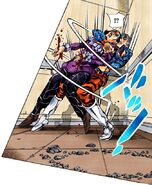 Scolippi gets grabbed by Mista when Rolling Stones disappears

Scolippi as he appears in GioGio's Bizarre Adventure Story Drama 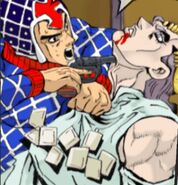 Scolippi getting interrogated by Guido Mista