Burned to death in a garbage truck incinerator

As a member of Passione and the Boss' Unità Speciale, Secco is dispatched along with his master Cioccolata near Rome in order to kill Team Bucciarati. He subsequently battles Bruno Bucciarati personally in the streets of Rome. Secco is a Stand User and wears his Oasis as a suit to fight in person.

Little is known of Secco's appearance as he constantly wears his Stand Oasis over him, only revealing his athletic build and crooked teeth.

Very little is known about Secco, as not even the boss was able to find concrete information regarding his past. Apparently, he was once a patient of Cioccolata, but sharing Cioccolata's warped mind and thoughts of spreading suffering, they formed a partnership. Secco obeys him as if he were a pet. When he was first introduced, Secco made various noises and gestures to communicate rather than words, indicating nonverbal tendencies or a lack of intelligence. Cioccolata sends him to film people's expressions as they die while he tortures them with his Green Day and occasionally rubs Secco's head for doing a good job, and rewards him with sugar cubes.

However, Secco's actual personality appears to be far from that of a loyal dog. His opinion on Ciccolata changes upon his death, claiming that he only listened to the latter because Secco believed he was strong, smart, had money and gave him candy. Secco goes on to claim that he no longer needs Cioccolata, calling him weak and spitting on the camera he originally used to film Cioccolata's victims. Subsequently, he demonstrates a higher intellect and understanding, showing a very curious and malevolent attitude as well as an ability to speak at length and analyze.

He's also prideful of his abilities, being insulted by Bucciarati's rough imitation of them while they were racing towards Jean Pierre Polnareff's location in Rome.

Oasis is a suit-like Stand granting him physical strength beyond human limits and the ability to liquefy objects he touches.

Spitting: Secco has an uncanny precision when he spits objects, to the point he can deflect bullets by spitting rocks at them. His spitting ability is also more powerful than average, as he is shown liquefying a large amount of rock to spit them upward, turning them into spikes that bombard a large area around him.

Hearing: Due to his habit of swimming underground, Secco developed a keen sense of hearing in order to locate his targets while underground. With this, he's able to determine the general location of a person from afar, and his precision increases the closer he is to his target. However, his dependence on his sense of hearing is his weak point; without his hearing, he lost his direction sense and sanity.

Secco was once one of Cioccolata's 'patients', used to satiate the latter's morbid desire to see others die slowly and painfully. He is somehow spared and becomes the mad doctor's loyal sidekick. Eventually, they were recruited into Passione, and both received Stands.

The anime also subtly inserts him into Squadra Esecuzioni's backstory by implying that he participated in the execution of Sorbet and Gelato, filming the whole ordeal.

Secco and Cioccolata were deployed by the Boss as a last resort to intercept Team Bucciarati in Rome and eliminate them.

First attacking Guido Mista and Bucciarati, Secco proved to be a far more powerful opponent than Bucciarati earlier believed and eventually is fought by him alone. Upon him discovering that Bucciarati's body was not affected by Cioccolata's Green Day, he instantly demanded to know the reason behind it, believing he could use it to defeat the boss.

Secco demonstrates his ability to attack faster than even Sticky Fingers, using the ground to amplify the momentum behind his punches (mentioned by Bucciarati to be akin to a wrestler using the ropes of the ring). Secco heavily damages his target before noticing the traitor's third-party ally in the Colosseum. He continues to assault Bucciarati with the plan to kill the unknown individual afterward, but Bucciarati escapes underground using his zippers. Angered at him for stealing his "special moves", Secco gives chase. After forcing Bucciarati above ground, he moves in to finish him off. However, Sticky Fingers punches a nearby tire, and resulting pop bursts Secco's eardrums (along with Bucciarati's own), rendering his tracking abilities useless. He then becomes disoriented and fearful to the point of taking a boy hostage. However, the boy was revealed to be Doppio, who is unfazed by Secco and Bucciarati's battle. Bucciarati uses Sticky Fingers to hit both of them, using his ability to punch through Doppio without hurting him and putting a zipper on Secco, keeping his arm stuck to his chest and making his throat melt in the process. Secco chokes as he panics to cancel his ability, then trips into the same combustible garbage truck that Cioccolata was previously dumped into. As the truck drives away to a garbage-processing plant, Secco notices Cioccolata's body and attempts, in vain, to wake him up, as the truck drives away to their grim fate.

Secco appears as the enemy faced in Chapters 17 and 19.

During Chapter 17, the player takes control of Mista and needs to reach the stage exit point. Mista must not stop moving at any given point during the chapter or will begin taking continuous damage from Green Day. Secco will appear at fixed points on the stage to attack the player with dive and sliding attacks, and though the player can temporarily stun him by hitting or shooting him, he cannot be defeated as he has no health bar, leaving the only method of winning being reaching the exit ramp. One of Secco's most powerful abilities involves him grabbing Mista and dragging him into the floor or wall he came out of, before throwing him out at certain points and setting him back.

Secco is not faced again until Chapter 19, with the player taking control of Bucciarati, the fight is set in front of the Coliseum in Rome. For much of the fight, Secco will be partially submerged underground, either flinging 'mud' or diving at Bucciarati to deal damage, punching him when he gets too close. Secco can also leave liquefied concrete on the ground to trap the player, hitting Bucciarati if caught. He also uses his own form of an attacking barrage or Stand Shoot, where he dives through the ground with a sliding kick and starts to rapidly punch the player when they're in the air if they get caught not unlike a power-type Stand, dealing massive damage. Secco also spits mud into the air, which then rains back down as solid spikes in an area-of-effect attack that can deal anywhere between small to very large amounts of damage to Bucciarati, depending on where he is within range.

Secco appears as a stage hazard in the Coliseum Stage. If one of the players is thrown into the hazard activation area, Secco will dive from Cioccolata's helicopter and liquefy five different spots on the map. Any fighter caught in the bubbling mud spots will take damage in short intervals, stunlocking them and leaving them vulnerable to their opponent until they've taken enough damage.

Secco's first appearance alongside Cioccolata, as Diavolo tells Vinegar Doppio to summon them

Using echolocation to hunt down Bucciarati 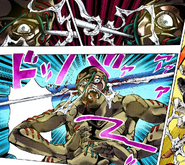 A confused and deaf Secco gets his leg run over

Secco films Gelato's dead body while standing alongside his master

Secco as he appears in Cioccolata's backstory

Secco catching all three sugar cubes in his mouth

Secco being rubbed again for catching all three sugar cubes

Secco being sent by Cioccolata to go after Bucciarati and Mista

Secco being promised 5 sugar cubes when the fight is over

Secco chases after the Coliseum

Secco notices the pole has a zipper on it

Secco falls on the fuel garbage truck, causing his death